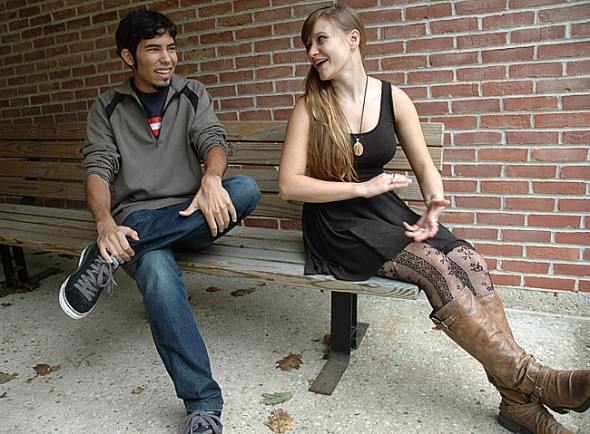 Zeb Reichert and Megan Miller, shown here at McGregor Hall, are Yellow Springs community members who are among the group of 35 Antioch College students arriving on campus this Saturday, Sept. 24. On Sunday the students begin a two-day community-building workshop at the Outdoor Education Center in Glen Helen, along with college faculty and some staff. (Photo by Diane Chiddister)

Class of 2015 to arrive at Antioch

Megan Miller of the Yellow Springs area was a freshman at Earlham College last spring when she applied to join the first class of Antioch College. She decided to change schools because “even though Earlham is small, I didn’t feel involved in my education,” she said, though she was a 4.0 student. She also felt inspired by the revived college’s new emphasis on sustainability.

Zeb Reichert, a 2011 graduate of Yellow Springs High School, turned down a substantial scholarship at Ohio University because he saw coming to Antioch as a “way of making my own path.”

Miller and Reichert are among the 35 young people of Antioch’s first class who will arrive on campus this Saturday, Sept. 24. Their arrival, from across the country as well as near Yellow Springs, is the culmination of two years of planning and preparation by the college, which came back to life after being closed by Antioch University in fall 2009. Led initially by Interim President Matthew Derr and since January by President Mark Roosevelt, college staff and faculty have worked tirelessly to prepare for the day that students arrive.

For Rahmanian, the wait has been even longer. A longtime member of the Antioch College faculty before the college closed, Rahmanian went on to become a leader of the Nonstop Institute, then took a job at Pacific Graduate Institute in California before he returned to the area last year. He joined Antioch as its academic leader last March, and has since been focused, along with the new faculty, in shaping and implementing the new curriculum.

The responsibility of helping to bring the historic college back to life can feel overwhelming as well as exhilarating, Rahmanian said.

“The joy and the feeling that we’re trusted” to launch the new Antioch “has its own pressure but also its own energy,” Rahmanian said. “I feel blessed that we have really good people working here.”

For Roosevelt, the arrival of students can’t come soon enough.

“It’s an awkward thing to be on a college campus with no students,” he said. Having the students arrive is a boost “for people’s morale, pleasure and ­inspiration.”

When students arrive with their parents on Saturday, Sept. 24, they’ll spend the day at a convocation and barbeque before the parents leave campus. Then the following morning, the new students are off to two-and-a-half days at the Outdoor Education Center in Glen Helen for a retreat on community-building.

“We’re starting with, how do we dialogue with each other?” said Dean of Community Life Louise Smith in an interview last week. “Because we’re so small and we have to do so much so fast, it seemed wise to practice together as we move forward, to have common grounding,” she said.

The idea for the retreat came from the college’s Task Force on Community and Community Governance — local members are Al Denman, Jennifer Berman, Jewel Graham, Wally Sikes and Levi Cowperthwaite — and “I embraced it as a good idea,” Smith said.

Antioch College alum Richard Maizell will facilitate the retreat, in which all six faculty members and some staff will also participate.

While the college has a long tradition of student empowerment through community governance, the revived college has a new opportunity to be “intentional and articulate” about community-building, including how to interact in constructive ways even during disagreements, said Smith, a longtime Antioch College faculty member.

“Sometimes previously as a community we didn’t have the opportunity to gain the skills to have vigorous debate without becoming destructive,” she said.

At the end of the retreat, the students and faculty will address campus policies on drug and alcohol use, “grappling with some real life stuff,” Smith said.

While governance will be one aspect of living and working together at Antioch College, leaders aim to weave community into other aspects of campus life. For instance, Smith said, students will regularly cook together, as well as have a weekly time to work on the Antioch Farm. The young people will also have the opportunity to take non-credit Community Life classes, including a class on mindfulness meditation led by villager Katie Egart.

When the students return from the retreat, they’ll live in single rooms in the newly renovated Birch Hall, where a residence life manager will also reside. The basement of Birch is currently waiting on health department permits to begin operation as a commercial kitchen (students will cook for themselves on weekends), and should be ready by the end of October. Until then, local eateries will cater some meals, and students will also attend some potlucks, according to Smith.

On Saturday, Oct. 1, students will spend a day in downtown Yellow Springs, attending the farmers markets, visiting local shops and attending a program at the Yellow Springs library.

Antioch’s emphasis on community shouldn’t stop at the border of campus, Smith said.

“What’s wonderful about community is that every interaction, including those with staff or in the village, can be a chance to practice,” Smith said.

The college will also sponsor potlucks for students and villagers, to be announced at a later time.

After their community-building retreat, students will start focusing on academics. In the later part of their 10-day orientation, they will meet with faculty advisors, take placement tests and attend a faculty open house to hear descriptions of available classes, according to Rahmanian. Classes begin on Tuesday, Oct. 4.

According to Roosevelt, what most excites him about the revived college is the new Global Seminars, interdisciplinary classes which focus on issues of contemporary sustainability concerns, including water, air and energy. The first quarter’s Global Seminar, which all students will take, will focus on water, and will be taught by new faculty David Kammler, a chemist, and Lewis Trelawny-Cassity, a philosopher.

“I’ve watched the faculty wrestle with the complexity of putting together the first seminar on water,” Roosevelt said. Because traditional academic disciplines are necessarily artificial and limiting, approaching a topic such as water from a variety of disciplines offers an opportunity for creative thinking and new solutions, he said.

“It offers a chance to put into practice what we preach,” Roosevelt said.

Also new to Antioch College this year is a hybrid block system, in which each 10-week quarter is divided into two five-week blocks. In each block, students will choose a foundation course, a language (Spanish, French or Japanese) and a Global Seminar.

Foundation courses offered this fall are Introduction to Philosophy, Cultural Anthropology, Introduction to Environmental Science and a two-dimensional visual arts course, according to Rahmanian.

To supplement the college’s new faculty — aside from Trelawny-Cassity and ­Kammler, faculty members are Sara Black, in 3-D and performance art; Kristin Adler, cultural anthropology; Geneva Gano, literature; and Anneris Coria-Navia, Spanish — the college hired an adjunct instructor to teach environmental science, as well as adjuncts to teach French and Japanese, Rahmanian said. It will also hire adjuncts to teach psychology and contemporary media art for the winter quarter.

Black is working on developing an artist-in-residency program for both the fall and winter quarters, Rahmanian said, and the college also hopes to have one or two guest faculty for the winter quarter.

In keeping with the importance of co-op to the tradition of Antioch College, each new student will work 10 hours a week, and will be paid this year from college revenue sources, since the college is not yet eligible for federal work study funds, according to Work Director Susan Eklund-Leen. Antioch could be eligible at the earliest for federal funding in June 2012, if it is accepted as a candidate for accreditation by the Higher Learning Commission, Eklund-Leen said.

First year students will each hold a job on campus or in the village. Twenty-five campus jobs are available, including ones on the Antioch Farm, in plant management, in the library, the office of community life and in various administrative offices, she said.

Ten jobs in Yellow Springs nonprofits, funded by the Miller Endowment, will include work at Home, Inc., the Yellow Springs Home Assistance Program, the Arts Council, the Tree Committee and Tecumseh Land Trust.

New students will continue to work 10 hours a week during the winter term, and spring term students will work full-time on their jobs. First-year students will stay in the community or area this year, and next year will have an opportunity to find jobs further away from Yellow Springs.

While the revived college’s curriculum, work program and community life segment have all resulted from intense planning, it’s important that they be approached with an attitude of flexibility, Roosevelt said.

“We’ll be a work in progress,” he said, ready to revise what doesn’t work and try something else.

The students will be critical in helping to shape the new Antioch College, he said.

“The students will tell us what they need and we’ll adjust,” he said. “I think we underestimate how much they will impact” the direction of the new school.