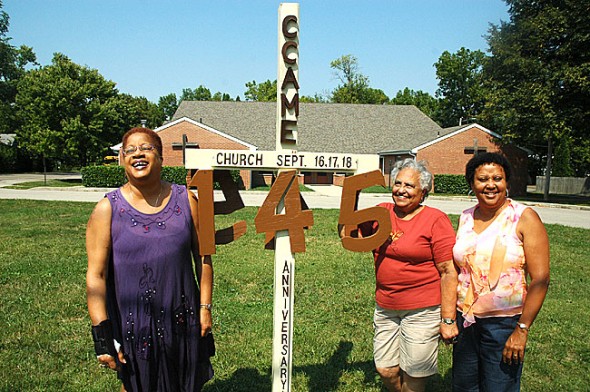 The Central Chapel AME Church is celebrating its 145th anniversary next weekend, Sept. 17–19, with a Friday evening banquet, Saturday afternoon picnic and two worship services on Sunday. Members of the organizing committee, from left, Carolyn Walker-Kimbro, Nan Harshaw and Denise Lennon, met last week at the chapel on High Street to finalize the festivities. (Photo by Megan Bachman)

In 1886, as the area’s educational opportunities continued to attract African Americans 23 years after the Emancipation Proclamation, 13 families from Yellow Springs and Miami Township formed a local chapter of the African Methodist Episcopal Church in a schoolhouse on what is now Ohio 370 near John Bryan State Park, according to church history. By the turn of the 20th century the congregation had built a one-room church on South High Street referred to as Central Chapel, had local landowner and freed slave Wheeling Gaunt as a member, and was serving the spiritual needs of a growing local African-American community.

Now a longstanding Yellow Springs institution, the Central Chapel AME church is celebrating its 145th anniversary next weekend with liturgical dancing, an old-fashioned picnic, dinner-theater, music and, of course, worship. Because its church members are active in the community and the community is active in the church, the entire village is invited.

“Throughout the 145 years, members have been very involved in Yellow Springs community in every aspect ­— “we’d love for the whole community to come,” said church member Denise Lennon last week. Lennon is planning the anniversary celebration along with fellow church members Shirley Smith, Carolyn Walker-Kimbro, Nan Harshaw and Ernestine Benning.

Looking to the next 145 years, church leaders say that despite an aging congregation, with an active youth community, a new pastor at the helm and new bible study group, spirits are high.

“The church is such a stronghold in the community,” Lennon said. “There will always be people to worship in this congregation.”

The three-day anniversary celebration begins with a banquet on Friday, Sept. 16, at 7 p.m. at the Holiday Inn in Fairborn. A $25 ticket pays for dinner and entertainment, including interpretative dance to Christian music performed by the women and girls of the Central Chapel liturgical dance group and the staging of an original play written and directed by Walker-Kimbro. The play, called “Carry On,” is about differences of opinion on ways to worship.

The party continues at an old-fashioned church picnic on Saturday, Sept. 17, from noon to 4 p.m. at the picnic shelter on Yellow Springs-Fairfield Road near its intersection with Ohio 235 in Fairborn. The church will provide meat to grill in addition to throwback games — potato sack races, egg toss, corn hole. Attendees should bring a dish to share and can, if they wish, wear their fancy picnic dresses, bonnets and hats of the style popular in the 1950s and ’60s.

The festivities conclude on Sunday with two worship services. At the 11 a.m. regular service, the former pastor of 15 years, the Rev. John Freeman — the longest-serving pastor in the church’s history — will speak. Freeman was well known locally for leading the annual Martin Luther King Jr. day march. The 4 p.m. service will be mostly music with performances by the church’s choir and inspirational singers, a liturgical dance group from Columbus called “Leap of Faith” and United AME Church of Xenia’s choir.

Most events are free and intended to bring together young and old, which church leaders said is critical to the church’s future. Central Chapel’s membership is steady at around 125, but participation fluctuates, the congregation is aging and there is a large underrepresented age group between 30 and 50 years old, church leaders said. Even though the declining number of African-American residents in the village has affected membership, the church is also drawing new congregants from all races.

Another hopeful sign for the church’s future is its active youth community, church leaders said. Besides the intergenerational liturgical dance group started by Jamie Liggins, the wife of new pastor Timothy Liggins, the church recently organized a back-to-school youth revival and sleep over and counts many families on its rolls.

“Our focus is on the young people because they will keep the church alive,” Lennon said.

Central Chapel AME Church has had a rich history in the village. The church hosts an annual Martin Luther King Jr. day service, provided space for the annual Gospelfest celebration and helps organize the annual donation of flour and sugar to local widows, according to church member Wheeling Gaunt’s wishes when he gave the nine acres of land that are now Gaunt Park to the Village of Yellow Springs. Gaunt’s funeral service in 1894 at Central Chapel “filled it to suffocation,” according to an account from the Yellow Springs Torch.

Central Chapel’s current church building was erected in 1971 at a cost of about $100,000. The congregation had previously worshiped at a building at Dayton Street and Elm Street and at the Antioch Preschool located at Walnut Street and Xenia Avenue. Its multipurpose facility, which hosts church and community gatherings, was added in 1998.

There’s much to celebrate at Central Chapel, and the church isn’t afraid to do so. Five years ago it commemorated its 140th anniversary by recognizing 10 of its long-term members and volunteers; in 2002, 90 women were honored in a special service; in 1999 the Rev. Freeman’s seventh year as minister was observed with six evenings of festivities, and in 1982 a mortgage-burning party marked the final payment for the church building.

The longevity of Central Chapel can be attributed to its family atmosphere and engagement in the local community, church leaders said.

“People are warm and welcoming here and always willing to reach out and support those in need,” Carolyn Walker-Kimbro said. This was demonstrated recently when the church responded to the plight of a single mother by finding her a place to live and furnishing her new home with items donated by church members.

“The church is a big family — it’s what attracts and keeps people,” added Smith.

Church leaders are committed to making sure that Central Chapel has a long future in Yellow Springs.

“We want to keep things in place so the church stays standing, so this church will be here another 145 years and beyond,” Lennon said.

For more information on Central Chapel and to purchase tickets for the banquet, call the church at 767-3061.