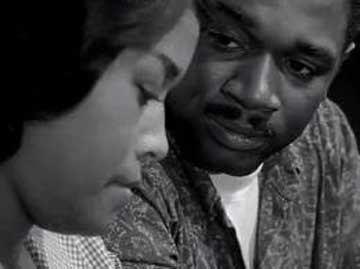 Ivan Dixon and Abbey Lincoln play Duff and Josie in the 1964 film Nothing but a Man.

Beginning today for the third consecutive year, the Nonstop Institute presents the African American Representation in Feature Films series with five films from 1964 to 1989. Antioch College professor and current Nonstop Institute faculty member Bob Devine sponsors the series that looks at how films by both white and black directors have represented African Americans in film over time.

The series opens tonight with Nothing but a Man, a 1964 feature by Michael Roemer about a couple struggling to find a place in a segregated community in Alabama. Set to an original soundtrack by Motown Records, the film’s authenticity was lauded by Malcolm X and is considered “culturally significant” by the Library of Congress.

Several years after making Nothing but a Man, Ivan Dixon, who plays Duff Anderson, a railroad worker and Josie’s partner in the film, took on the director’s role to make The Spook Who Sat by the Door. That film, which is the second in Devine’s series, was billed as a gangster movie but artfully hid its underlying theme of “urban-based warfare for African American liberation in urban communities,” according to Devine’s description.

The series continues every Thursday through Nov. 10. All films begin at 7 p.m. at the Nonstop facility at MillWorks, 305 North Walnut Street. Participants are encouraged to see the works as a series, but the events are open for individual screenings as well. The cost to attend is “pay as you are able.”

For more on the series, visit http://nonstopinstitute.org/nonstop-presents/african-american-representation-in-feature-films/