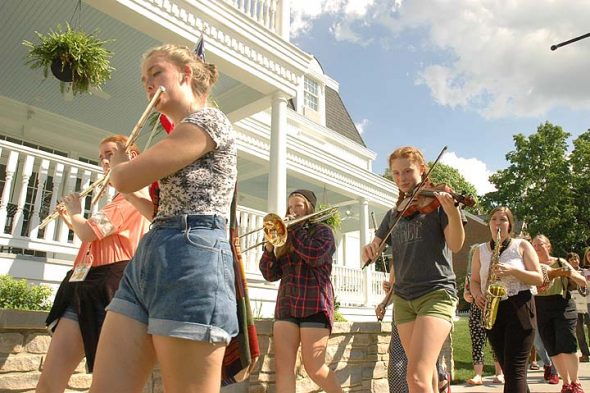 Young musicians with the Friends Music Camp, or FMC, marched through town on Saturday, July 30, to promote the 33rd annual benefit concert for Glen Helen, held later that evening. FMC musicians played flutes, horns, violins, saxophones and plenty of percussion as they passed the Mills Park Hotel and continued to move their joyful noise up Xenia Avenue. (Photo by Matt Minde)

What started out as a quick musical march up and down Xenia Avenue (top) ended up as a two-hour performance Saturday evening, July 30, to benefit Glen Helen. The 33rd annual concert, titled “Musicians for Justice and Peace,” featured Friends Music Camp campers and instructors in various solo and ensemble performances, including the world premiere of a choral piece, “Songs of Hope and Joy,” written by Michael Mikulka, a camp instructor.

The concert was held at Antioch College’s Foundry Theater. Over 200 people attended, and over $2,100 was raised for Glen Helen.