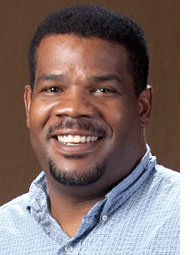 Lou Strolger, a 1991 graduate of Yellow Springs High School, contributed to the Nobel Prize-winning discovery that the expansion of the universe is accelerating. (Photo courtesy of Western Kentucky University)

Lou Strolger has always loved the stars. As a teenager, he would stargaze with the astronomers and astrophiles at Antioch College. And he thought he might someday become an astronaut.

“I held onto that dream longer than any mature kid really should,” he said during an interview last week.

But it was the dream that led him to collaborate over the past decade with Adam Riess, one of the three astronomers who received the Nobel Prize in physics last week from the Royal Swedish Academy of Sciences. Some have said the prize belongs to the larger group of scientists who contributed to the discovery of a fundamental principle of the universe: that something now known as dark energy is causing the expansion of the universe to accelerate. As Strolger explained it, the discovery turned everything astronomers knew about the universe on its head.

Prior to the discovery of dark energy, “we were zeroing in on life, the physics of the universe and everything, and then this wondrous new element came out of nowhere, and you go, ‘Wow,’ your universe was so completely un-understood!” he said.

“That was a surprise,” Strolger said. “It became clearer that, yes, the further out [in space] you go, you find it’s true that everything can be traced back to a single point, the Big Bang,” which occurred about 13.7 billion years ago, he said.

Scientists at the time were pleased that they were able to see far enough to perceive star light from about 1 billion years ago. And then over the intervening decades, scientists began using the Hubble Space Telescope to see 9 billion years back in time, which again changed the accepted paradigm of the universe.

Riess was the lead author of a paper published in 1998 about the existence of dark energy. That was the year Strolger began his dissertation on supernovae, or exploding stars, with guidance from Saul Perlmutter, one of the other astronomers who received this year’s Nobel in physics. According to an article in the New York Times last week, the teams of Perlmutter and Riess were competing to verify that supernovae were dimming over time, and that the universe’s expansion is speeding up. And when Riess went looking for a postdoctoral fellow to work with him on the confirmation of dark energy at the Space Telescope Science Institute in Baltimore, he chose Strolger.

In order to explain why the universe was expanding faster that it was before, there had to be an antigravitational force causing it — or else the total energy budget of the universe wasn’t completely accounted for, he said. That antigravity became known as dark energy. And it makes up about 70 percent of the universe, including a whole lot of stuff on earth that exists in between the 5 percent humans can perceive, he said.

The discovery still fascinates Strolger, who likened the understanding of dark energy in the universe to water on earth.

“Imagine a scenario where we didn’t understand what water was,” he said. “That’s an example of how really lost we are. The universe is made of this material we have no idea about.”

After three years in Baltimore, where Strolger contributed important research that eliminated doubts that the supernovae were dimming, he took a faculty position at Western Kentucky University, where he currently teaches in his research field. He credits his academically gifted Yellow Springs High School class of 1991 with pushing him to achieve. He returns to Yellow Springs often to see his brother Shahkar Strolger and father Andrew Strolger, who live in the village, and his mother, Marcia Hudson, who lives in Centerville.

According to the Times, half the prize, worth $1.4 million, went to the Perlmutter team, and the other half went to the team of Riess and the third Nobel recipient, Australian scientist Brian Schmidt. Riess wrote Strolger a thank-you letter when he received the prize. According to a quote in the Guardian from Lord Martin Rees, Emeritus Professor of Cosmology at the University of Cambridge, “It would have been fairer, and would have sent a less distorted message about how this kind of science is actually done, if the award had been made collectively to all members of the two groups.”

Strolger does believe that because most science is now done cooperatively on an international scale, recognition has to go to a representative of a much larger group. But most exciting to him is that the mysteries have just multiplied. More science than ever is needed to understand what the universe is really about, he said, adding that he hopes to continue to contribute to that future effort.

“It’s clear that in my lifetime we’ll be working to quantify dark energy,” he said. “But it will be years before we understand how we can use it.”