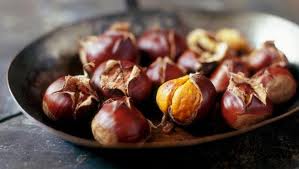 Clearly, Mel Tormé thought he had the last word on chestnuts as a Christmas thing. But the appearance of the smooth mahogany nuggets on grocery shelves recently reminds me that these fall fruits are not just for holidays. They’re one of my favorite unglamorous foods to have anytime. And they are so underappreciated here. I mean, who actually does more with chestnuts than sing about them at the holidays?

Part of the reason is that chestnuts are hard to get at. Squirrels have spent thousands of years honing their genome so they can hold onto the slippery buggers long enough to bring their incisors down on them like a guillotine and pry them open from there. Thankfully our mouths are not equipped with such tools. But that means we have to go to other lengths to break in. Having larger brains than squirrels, we invented a more sophisticated method of heating the nuts to separate the meat from the shells.

My family and I employed such a method just this past weekend, with a Tex-Mex pre-Thanksgiving meal of chili, cornbread, rosemary root veggies, Jerusalem artichoke salad and a roasted nut mix, including chestnuts. (While we were having Christmas traditions early, we figured we’d bring out our nutcracker too). Having roasted the veggies at about 450, we stuck the chestnuts in at that same temp for about 15 minutes. When we heard the first little explosion go off inside the oven, we knew pretty well immediately what had happened. Erika rifled through the drawer for a hot pad, and we heard another “phoom!” We turned on the oven light and saw chestnut innards stuck to the glass window. She pulled the tray out of the oven and turned to my mom, who had a bowl to receive the chestnuts from the tray. Then, another “POP….thoot.” My family members stared at each other. The white flesh of our precious chestnuts had formed a dusting in their black hair and on their clothes, and it was splattered on the kitchen windows, the ceiling, walls and floor. They quickly transferred the miniature bombs into the bowl, then, “Ssoof,” another spattered the drain board and the coffeemaker.

Our immediate reaction was to break down in laughing fits, and the following impulse was to clean up the people. “Surely that was the last explosion,” we thought. But they kept getting spattered anew by more chestnut bombs. It was a full two minutes before we secured a tray over the bowl to contain the chaos.

Then someone said, “You mean you didn’t score them before you put them in there?”

Chestnuts are like nuts in that they have a shell, but they taste quite sweet and starchy, kind of like a dense yam. And here (as usual) is where the French excel. They make a sweet chestnut purée, which can be purchased in a can. I like to eat it with a spoon, but it’s used as a filling in cakes and on bread for kids’ snacks. And in Paris they sell roasted chestnuts on the street in these steaming hot bags, already shelled and ready to eat. Imagine, a humble chestnut, in Paris — just outside the patisserie with the milles feuilles and chocolate éclairs.

Japanese confectioners use a sweet chestnut paste as well inside their pastries made from sticky rice (mochi). And they eat sweetened chestnuts with fruit and cold cubes of sweetened agar agar in the summer (mitzu mame).

My grandmother tells a story about hearing the chestnut vendor calling from his cart in the wintertime in 1930s Dairen, Manchuria. She and her siblings would scramble outside in the cold and each buy a cup of hot roasted chestnuts. They would eat them while they were doing their homework. Then when all the chestnuts appeared to be gone, a disappointment would settle over the group. And Kaki’s brother would start to grin and suddenly pull up the skirts of his hanten to reveal a small pile of chestnuts he had kept back. He wouldn’t share until they forced him to.

I was excited to plant a chestnut tree in our yard until I read that when started from seed it takes a tree 30 to 40 years to bear fruit. Maybe we can graft one, which takes only four to five years. I’ll let everyone know when my tree starts to produce. The squirrels won’t have a chance. But until then, I’ll keep buying them, and roasting them during the fall, and right through another saccharine sounding Christmas. And I’ll never forget to score again.