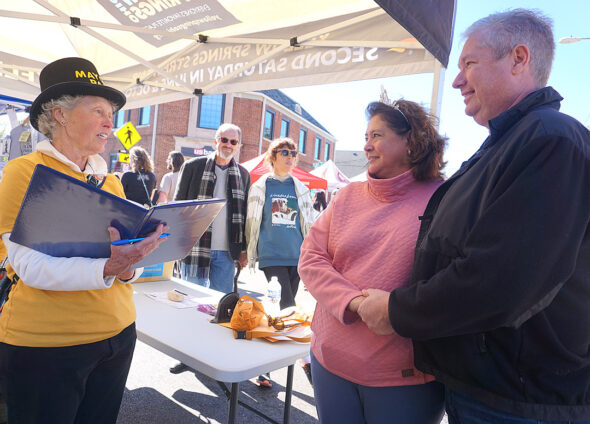 Mayor Pam Conine performed her 127th wedding under the canopy of the information booth at Street Fair on Saturday, Oct. 8. (Photo by Lauren "Chuck" Shows)

Amid the hustle and bustle of the return of Street Fair on Saturday, Oct. 8, one couple made time for — as far as this newspaper is aware — a Street Fair first: Cincinnati couple Sarah Valenzuela and Michael Kuhl were married by Mayor Pam Conine in an impromptu wedding ceremony.

The couple approached the YS News booth and asked if News staff knew of anyone who could legally perform a wedding. The News was — perhaps serendipitously — located right next to the info booth where Conine and other community volunteers were handing out guide maps and providing directions.

Valenzuela and Kuhl said they had obtained their Ohio marriage certificate, which they luckily had on hand, and were planning to hold a wedding ceremony across the bridge from their Cincinnati home in Newport, Ky. They had recently learned, however, that they could not be legally married in Kentucky with an Ohio license. Looking to be legally wed before the Kentucky ceremony, the couple said the usual large crowds at Street Fair, at which they have been regulars in the past, inspired the spontaneous nuptials.

“[Kuhl] is actually ordained — but of course, he can’t marry us!” Valenzuela told the News before the ceremony.

“So I said, ‘Hey, there’s gonna be a bunch of people [at Street Fair] — grab the marriage license, and maybe we can find somebody!” Kuhl added.

Fifteen minutes after the pair approached the booth, the two were wed by Conine amid the crowds of fair-goers in a very brief ceremony, with the bride sporting a new crystal tiara she purchased at a craft booth moments before.

The wedding was Conine’s 127th since being elected for her first two-year term as mayor in 2017; she is now in her third term.

“Today is the day you’re going to change your status from single individuals to a married couple, formally — and very publicly,” Conine said during the ceremony. “May the promises and the vows you make here today live always in your home, and continue to flourish and grow and lead you to a lifetime of happiness.”