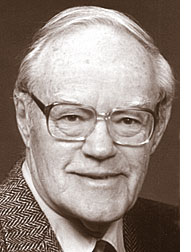 Fred was born to Edith Reeves and Vernon Rea Dunlap on June 10, 1922, in Washington D.C. where Vernon, a naval captain, was stationed. Fred was the grandson of the famous Philadelphia engineer, Frederic Dunlap, who built the Philadelphia water supply, which was a model of sanitary city water in its day. Dunlap is mentioned in water engineering textbooks today.

Fred attended Lower Merion High School near Philadelphia. He was a star athlete in basketball, football and track until he injured his knee jumping over a fence just for the fun of it. That injury kept him out of the military during WWII, and taught him the value of academic success in addition to sports prowess. He focused on bodybuilding, which was fashionable at the time. He met his future wife, Marjorie Ann Davis, at a debating event between her Upper Darby, Pa. high school and his high school.

Fred attended two years of college at Penn State, where he was a friend and Triangle fraternity brother of the future governor of Alaska, Jay Hammond. Then Fred transferred to the University of Pennsylvania, where he received a bachelor of arts degree in engineering in 1945. His true interest was in architecture, but he was advised that engineering was a more practical major, especially during WWll. Later in life, he found outlets for his artistic and creative talents by designing and building two family homes, doing a few paintings and drawings for family and friends and creating wonderful backdrop scenery for his elaborate model trains.

On Oct. 23, 1943 Fred married Marge. They moved to Connecticut, where he did metallurgical aircraft engineering for Chance Vought in Stratford. During this time, he met Charles Lindbergh, who flew the V-173. In 1945, with peace coming, Vought worked on small experimental planes and Fred determined the loads and feasibility of landing vertically on rooftops, among other things. The family grew to four with the births of Peggy and David. Vought moved to Dallas in 1948, so the Dunlaps moved there too and welcomed their third child, Ann. Fred was always in awe of the test pilots in Dallas for their bravery, skill and sometimes downright cowboy style. The engineers and pilots from that era formed a “Vought Survivors” group who continue to stay in touch. They were involved with cutting edge designs, such as the “pancake,” a flying saucer-type commuter plane designed to hold four people and land anywhere. The pancake experiment was ultimately scrapped but Fred and the other fellows enjoyed working on it.

In 1952, the family moved to Syosset, Long Island and Fred worked for Grumman. With the desire to leave defense work, he explored teaching college math in the midwest. After he met with Arthur Morgan, he was recruited by Bruce McPhaden as an engineer to Morris Bean & Company in Yellow Springs. Accepting the position was contingent upon Bruce’s family adopting one of the Dunlaps’ recently born puppies.

Yellow Springs became home for many years and the fourth child, Jenny, was born there. It was a wonderful life on Hyde Road with a horse, sailboat and many travels. When the older children left for college and other pursuits, the family moved to Beavercreek, Ohio.

After retiring from Morris Bean, Fred worked for Precision Castings Corp, or PCC, which specializes in titanium parts, in Portland Oregon. PCC became quite a successful company. Fred worked on each part for the $300,000 worth of parts for General Electric’s CF6-80C, which powered most of the 1990s wide-body aircraft. Fred retired from PCC in 1988.

When daughter Jenny married Dan Oney and settled in Reynoldsburg, Fred and Marge purchased a home in nearby Pickerington, Ohio. Fred’s retirement interests included tutoring Pickerington High School students, especially athletes, in math. He tried to impart the value of an education to the athletes. He also greatly enjoyed his model train railroading with his grandchildren, Brandon, Danielle, and Sara. His train set up included a model of the Pennsylvania Railroad. The “Pennsy” was the line the family took for their annual trips to Philadelphia.

Throughout Fred’s life, he made quick and lasting friendships. He maintained life-long correspondence with fellow mountain climbers from around the world, his fraternity, coworkers, extended family and childhood buddies, who were dubbed the “unholy seven.” Writing was his thing.

Fred’s faith was central to his life. He taught Sunday school in the Yellow Springs Frist Presbyterian Church, was a lay minister at an Episcopal Church in Xenia and an active member of Reynoldsburg United Methodist. Fred’s other passion was mountain climbing. He either hiked or climbed a mountain every year from 1933 (Red Top Mountain in Pennsylvania) to 1995 (Mt. LeConte in Tennessee). Highlights include the Matterhorn in Switzerland at the age of 50, Mt. Rainier, Mt. Whitney and Mt. Washington.