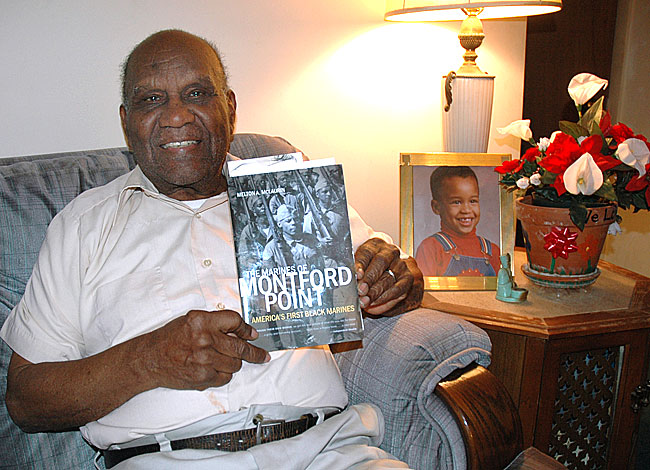 Villager Jonas Bender will be honored soon for his World War II military service, when he was part of the first group of African Americans to join the Marines. Called the Montford Point Marines, the group was subjected to racism and segregation while in the military. The group will receive the Congressional Gold Medal this spring for its contributions to the war effort. (Photo by Diane Chiddister)

In 1943, Bender became part of the first group of African-American young men to join the Marines. Known now as the Montford Point Marines, the group grew to include 20,000, many of whom were assigned secondary and demeaning roles in World War II, and all of whom were subjected to segregation.

“The Marine Corps then was an elite white man’s operation,” Bender said in a recent interview. “That was the United States at that time.”

Almost 70 years after he was drafted into the Marines, Bender is being honored for his experience. The honor is bittersweet, for several reasons, he said. First, the experience of being an African-American Marine at that time was one of living with racism and prejudice. And second, Bender is saddened that so few of the original group are still alive to experience the recognition. Only about 200 of that original 20,000 are still living.

The group will be recognized sometime this spring for their military efforts with the Congressional Gold Medal, the highest civilian honor possible. Organizers have not yet named the date of the award ceremony, which will be either in Washington, D.C. or Montford Point, N.C., the site of the group’s training camp. Bender is hopeful that President Obama will be present.

While the experience of being one of the first African-American Marines was undeniably difficult, Bender is quick to acknowledge that it also left him with several positive outcomes. First, he was able to use the GI Bill to put himself through college and graduate school. And perhaps more important, Bender became motivated to spend his life making this country more tolerant and humane to those of all races.

“We all need to recognize ourselves and each other with love and respect,” Bender said.

You could say Bender spent his life living by that statement. While before the war he had a year of chemistry in college and planned to become a doctor, after he left the Marines in 1946 he focused on working to help change society to be more tolerant and accepting. After getting a masters degree in public relations, he worked first at Knox College in Tennessee, then joined the Urban League staff in Dayton, focusing on helping underprivileged people secure jobs and housing. He then went on to work at Frigidaire, helping to improve that company’s employment practices, and finally did the same work at General Motors. Bender retired in 1982.

While his experience in the Marines helped Bender find his life’s work in improving society, he was also inspired by his most important role model, his father, the Rev. William Albert Bender, who worked as chaplain at Tougaloo, an African-American college. While the college town was amazingly integrated given its location in Mississippi, the Rev. Bender spent much of his life on the front lines of civil rights issues in the Deep South.

“He was very courageous and sometimes foolish. That man walked around not afraid of anyone,” Bender said. “It did me a lot of good to see that.”

Rev. Bender was a leader in campaigns to help register black voters and to ensure equal pay for black teachers, among other issues. From him, his son not only learned to have the courage to stand up to racism, but also to do so with diplomacy rather than violence.

That lesson served him well when Bender, then 18, was drafted into the military in the middle of World War II. While other branches of the military had been integrated, the Marines had resisted until an order by then President Franklin Roosevelt forced that branch to do so. So the Marines accepted African Americans, but in a decidedly segregated and unequal fashion. First, a separate training center near Camp Lejeune was built, in Montford Point, and black recruits were discouraged from interacting with whites. And the first black Marines were trained by white drill sergeants, some of whom were blatantly racist, according to the 2007 book, The Marines of Montford Point, by Melton A. McLaurin. For example, Bender remembers that if a recruit in his group did something wrong, he had to stand in a public place on a barrel flapping his arms like a bird, shouting, “I’m the biggest sh–tbird” of the company until the drill sergeant allowed him to stop.

“That’s the kind of dehumanizing thing that happened,” Bender said.

On top of that sort of treatment, the area was rich in rattlesnakes, and in summer, excessively hot. All in all, Bender says of his time in training, “It was a long day.”

After being trained, the black Marines were mainly relegated to support, and in some cases, subservient positions during the war. Some worked in ammunition and others carried supplies like beasts of burden. While some rebelled against the treatment, Bender, who worked as a radar operator, did not do so in an abrasive way. Rather, he said, he chose to follow the model of his father.

“Fortunately, I’d learned the lesson that being angry did no good. I think that saved me,” he said, calling his memories of the years in the Marines, “painful but not bitter.”

After he was discharged and received his education, Bender met his future wife, Ethel, while he was working at Knox University, where she also worked. When the two moved to the Dayton area and had a family, they weren’t satisfied with their children’s education, and heard about a village nearby with good schools and a welcoming attitude to African-American families. The family moved to Yellow Springs in 1965 and in 1966 built the house they still live in, on Birch Drive. There, they raised their two children, Jerri and Michael, of whom they’re very proud. Jerri now teaches music in San Diego, and Michael, the president of Walmart West, oversees the business operations of all Walmart stores in 20 western states.

While the Benders are grateful to have raised their family in Yellow Springs, they see room for improvement. For instance, Jonas and Ethel both would like to see more emphasis on black history in local schools. Several years ago a history teacher from Washington Court House had students contact Bender when researching black history, (the interviews were made into transcripts and donated to the American Folklife Center of the Library of Congress) but he hasn’t seen the same interest from local teachers.

“As a community we need to think about what needs to be done to make things better and then do it,” he said. “It takes time and continuing effort to make change.”