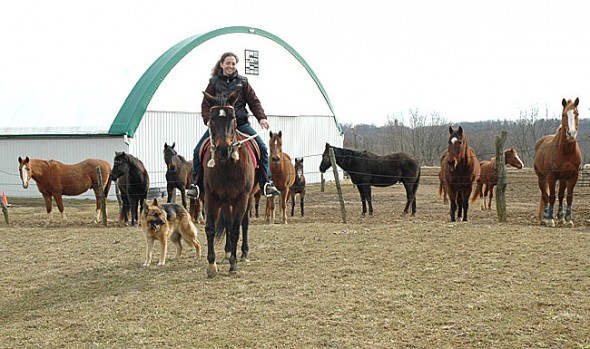 Laura Funderburg uses the natural horsemanship technique when she trains and teaches at her family’s farm on the southern edge of the village. (Photo by Lauren Heaton)

When the movie Buck came out last year, it seemed like natural horsemanship had been a tightly kept secret among the true blood cowboys of the Western foothills. Little was it known that 20 years before, at the place where east Hyde Road ends and unspoiled farmland begins, Pat Funderburg had begun his own practice of asking, not telling, and working with instead of against, the horses on his family’s farm. The teaching of that practice, based on the Parelli method of natural horsemanship, is now the foundation that ensures the survival of the century-old Funderburg Farm.

The farm was abustle on a recent morning, when, as usual, Carson Funderburg had everyone’s attention at the breakfast table. There to announce that he wanted a tangerine, Carson, almost 2, pointed and gurgled as every adult in the room focused on serving his need. With the patience of a monk, Laura Funderburg, Carson’s mother and Pat’s niece, made as many guesses as it took to learn that Carson was actually after a peeled tangerine to eat.

“Parenting is a lot like natural horsemanship,” said Lee Funderburg, Laura’s other uncle. “Instead of fighting, you engage to accomplish a common goal together. As you keep trying, you’re building trust that eventually you will find the right answer, without having to use force.”

Under the white velum cover of the outdoor ring, where the day is always bright, Laura coached her friend Sarah to use a similar approach to get her curly horse, Rali, to straddle a wooden pole. Instead of riding Rali, Sarah spent her lesson on the ground using extremely small movements of a single line bridle in one hand and in the other, a stick with a long string called a carrot stick. Through subtle gestures of the bridle to guide Rali’s lateral movement, and the carrot stick to guide forward motion, Sarah “talked” Rali through straddling the pole, stepping on a pedestal and running in a figure eight. The only time she touched him was to scratch his back with the end of the stick, a congratulatory move also known as “the friendly game.”

In the animal world, the notion of people riding horses is preposterous. Instinctively, horses are animals of prey who see humans as predators. From a horse’s perspective, throwing an animal hide on his back and having a predator bark orders at him from behind is as threatening as if a cougar jumped on his back and tried to ride him, Laura said. So before any riding occurs, a rider must establish a trusting relationship with the horse, one in which, contrary to nature, human and horse are partners.

Building relationships takes time, which was something that local resident Nadia Kasparek had in luxurious spades growing up with her horse, Hershey, at the Funderburg Farm. As middle school girls, she and her friend Sadie Rehm were at the farm constantly after school and in the summers, following Laura around, talking to “the uncles” and hanging out with the horses.

Kasparek came to Laura after an exasperating start with Hershey, who would take off running when she tried to ride him. Laura taught her to get to know her horse on the ground, where Kasparek was able to encourage Hershey to want to be with her and enjoy working together.

“It’s about realizing where the horse is and getting him to want to be with you by showing him you’re a good place to be — that you’re someone he can trust.”

Six generations of Funderburgs have owned the Funderburg Farm since George Funderburg purchased the 100-acre farm in 1885 for $3,900. A small farm by any standard, it has always been a struggle to keep it profitable as a crop and cattle business, according to Lee Funderburg. But the family valued the farm for more than its profitability, and when Hugh Taylor Birch proposed including the farm in the first purchase to establish Glen Helen in the 1930s, the family refused to give it up, even for the generous $16,000 they were offering. Robert Funderburg, who raised Lee, Pat and Laura’s dad, Bob, on the farm, worked off the farm to make enough income to support it. Bob still works at Morris Bean, and Lee is a professional printmaker and artist for the half of his life he isn’t harvesting hay, mending fences and feeding the animals.

And while the property has survived on income from different crops and animals, the one constant on the farm has been horses, for work and pleasure. Currently, the main business on the farm is the boarding of about 30 horses and teaching natural horsemanship lessons, which all three men concede is Laura’s domain entirely. Though the uncles say that after taking Laura out to the Parelli Ranch in Colorado (what Lee calls the mother church of natural horsemanship) for a 10-week natural horsemanship course in 2008, they too have begun to use the method with the horses because it makes sense and it works, Lee Funderburg said.

“Natural horsemanship has become part of our identity on the farm,” he said. “Using communication and understanding versus fear and intimidation to work with the horses and create a partnership.”

Parelli wasn’t always in the mix, even for Laura. As a young girl, Laura’s dream was to be an Olympic equestrian. Though she moved with her mother to Springfield at a young age, she continued to come to the farm every day after school and lived there in the summers to be with and work with her horses.

“All I wanted to do was show and make it big in jumping,” she said.

But in the seventh grade she got a new horse who turned out to be very stubborn. She remembers trying to put him into a trailer, which he refused and ran away. Frustrated, she turned to her uncle Pat, who 20 years before had read an article on natural horsemanship by American trainer Ray Hunt, one of its best known proponents. Pat had gotten a weanling and trained it using the methods he read about, and had gotten fairly good results. Laura got some books and videos and made a visit to the Parelli Ranch, where she found scores of people doing exactly what she wanted to do: make her life about natural horsemanship. She had found the key to the horse communication code and summed it up with a shop aphorism.

“If you force a horse to do things, they’ll never give you more than you ask for. If you get them to offer things, the possibilities are endless.”

The Funderburgs feel similarly about their farm, which they are wholly committed to because of the gifts of beauty and serenity it gives them every day. The work load is heavy and constant, reminding Lee of the adage, “Does your property own you, or do you own your property?” In reality, the family has a partnership with the entire farm, which is a give and take in which the possibilities are also endless.

“I think the farm has a magical quality,” he said. “When you cross the bridge and come down the gravel lane covered by trees, there are no cars buzzing by and we’re serenaded by coyotes and owls. It’s like a different world out here, and we don’t mind sharing it with others.”