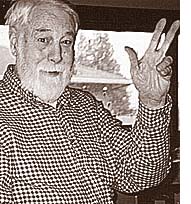 Richard Warren Northway died peacefully on Thursday, March 29. He was 91.

Born in Knightstown, Ind. on Dec. 30, 1920, Richard had never left the state when, at approximately age 19, he was sent to Elkton, Ore. as a conscientious objector during WWII. It was in the forest work camp in Elkton that Richard made a fateful decision to volunteer as a guinea pig in a malaria ward in New York City. Lonely in New York, after he was well enough to leave the hospital, he went to a Friday night folk dance and met Hanna Ebert, his soul mate. What a match. Richard was the superego to Hanna’s id; the calm life-sustaining cerebellum to her wild frontal lobe. While Hanna was clearly the front man for this act, Richard was steady rhythm and bass. One of Hanna’s aunts, who thought of Richard as a saint, once said, “The only patience Hanna ever learned, she learned from Richard.” And boy, did he have patience. When Hanna brought home a never ending stream of stray animals, wayward teens and homesick college students, Richard always good naturedly agreed. As he once said, “Sometimes I have to put my foot down…usually right where Hanna tells me to.”

Richard and Hanna moved to Yellow Springs in 1947 with the goal of joining an “intentional community.” They lived on the homestead property when it still existed on the edge of Glen Helen. Richard began work at the Antioch Bookplate Company, where, at one point he knew how to operate every machine in the shop. After many years there, he was offered a management position with a significant increase in pay. He turned it down because it would have meant long, irregular hours and not making it home in time for dinner with the family. In all of the years his family can remember, Richard never missed a meal with the family, even riding his bicycle home from work to have lunch at home .

Richard, raised a conservative Methodist, and Hanna, a non–practicing Jew, compromised and joined the Friends Meeting. Hanna promised to give up smoking and, in return, Richard agreed to take up drinking wine and beer.

Richard had too many pursuits and hobbies to name them all. One became wine and beer making. He would try any variety of fruit in his pursuit of a good homemade wine. Tomato and mint wines were not a great hit (although they did provide the raw material for a great “science project,” a miniature moonshine still). The sloe plum, wild cherry and elderberry wines were quite good. One batch of home brew got a little too active and exploded in a closet. He and Hanna started a recorder music group. Richard on the big bass recorder with his distinguished beard was an impressive sight. He acted in many local productions: A Midsummer Night’s Dream, Amahl and the Night Visitors, The Crucible, and The Pirates of Penzance, and of course the local Nativity play at Christmas.

Richard was an athlete in a non-conventional way. He could mimic many of the classic figure skater moves and taught too many young people to count how to skate. He even joined in some of the pond hockey games, as long as the no-lifting-the-puck-above-the-knee rule was in place. On really cold winter nights, Richard and Hanna would bundle up family and friends, take hot chocolate and head out to the frozen Little Miami River or Grinnell Pond to ice skate by full moon light or go for midnight walks by candle light in the Glen. At age 75, he would lead his kids and grandchildren down Gaunt Park hill at night on a giant toboggan.

Richard was committed to serving others and social justice long before the term even existed. He walked many miles protesting against war and the nuclear arms race at Wright Patterson Air Force Base. He and Hanna traveled to Germany for the 50th anniversary commemoration of Krytal Nacht. They organized volunteer folk dances at Dayton State Mental Hospital. Richard and Hanna would never turn away someone in need of a meal or a place to stay. Their Sunday brunches were legendary and a home away from home for many Antiochians.

Richard and Hanna were mavericks in other ways. Richard built a geodesic dome before most people had even heard of Buckminster Fuller. They were locavores five decades before the word entered public consciousness. Richard had a spectacular garden, chickens, ducks, goats and a small pony. He had bee hives and went out to collect swarming bees when called.

Richard was always game for a new adventure, although sometimes he had to overcome his own good common sense to go along for the ride. When David proposed the family travel to see an obscure property on a remote fiord in Northern British Columbia, with no access except by water for 50 miles, Richard agreed, on the condition that they bring along a two-way radio. A radio with strong enough coverage was never found, and yet Richard, Hanna and multiple younger children, and two dogs piled in the International TravelAll, drove 3,000 miles, including the last three hundred of washboard gravel, and were dropped off by two float planes with no safety net but instructions to come back in a week to pick them up.

Richard had the heart, compassion, and patience of an old soul (he had a lot of practice with Hanna and Omi Ebert). His quiet resolve and strength, constant good humor, and ability to find the positive in every situation made him a role model for many.

Six kids, eight grandchildren, one great-grandchild and a multitude of others too large to count already miss Richard, but trust that his many lessons and values live on in multiple next generations.