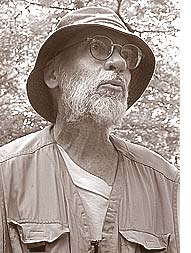 Daniel Pearson died Friday, Sept. 14, at his home at Lawson Place. He was 66.

Daniel was born in Springfield, Ohio, in 1946 and graduated from Mechanicsburg High School. Having been formally trained as a musician, he attended Capitol University in Columbus, where he majored in music and performed piano solos and concertos.

At some point after graduating college he began a spiritual seeking, following various religious groups such as the Hare Krishnas and the snake handlers as far as Minnesota and California for about 15 years. Diagnosed with a mild form of bipolar disorder and schizophrenia, Daniel went into a three-year period of isolation and emerged needing a place for quietude. A cousin who owned TL Springs in Yellow Springs, invited him to the village, where he made a home at Lawson Place and found a sanctuary in Glen Helen.

Though not trained as a botanist, according to friends who knew him, Daniel had an insatiable hunger to know and identify the plants he saw on his walks through the village and the nature preserve. According to Glen staff member Brooke Bryan, he spent four years meticulously cataloging the phenology of these plants using a set of field guides and notebooks he carried with him. He shared what he learned, leading wildflower hikes in the Glen, and had hoped to turn his findings into a wildflower guide for the Glen.

“He was a lay person with a naturalistic eye and a curiosity,” Glen Helen Ecology Institute Director Nick Boutis said. “He had the temperment, and was in the tradition of the gentlemen scientists like Charles Darwin and others from the English aristocracy…he really built quite a following because it was refreshing to walk with someone who was honestly excited about every blade of grass.”

In the last months of his life, Daniel brought his passion for plants to his home, where the garden he had built was being threatened with imminent removal. He worked tirelessly especially in the last three days of his life, according to friends and neighbors, to move some of his violets and rose of Sharon bushes to an area where they would be safe from removal.

In addition to classical music, Daniel also loved pop tunes, especially the Ink Spots and Italian singer Connie Francis. According to cousin Linda Griffith, he would buy a record, listen to it for hours, and then go to the piano and play what he heard.

Daniel is survived by his cousin Linda Griffith and her husband Clark, of Hillsboro, their family and friends. Anyone interested in helping to plan a memorial service for Daniel is invited to contact Brooke Bryan at the Glen at 769-1902, ext. 101. The Glen is accepting donations in Daniel’s name, possibly to help fund a wildflower guide for the Nature Shop.