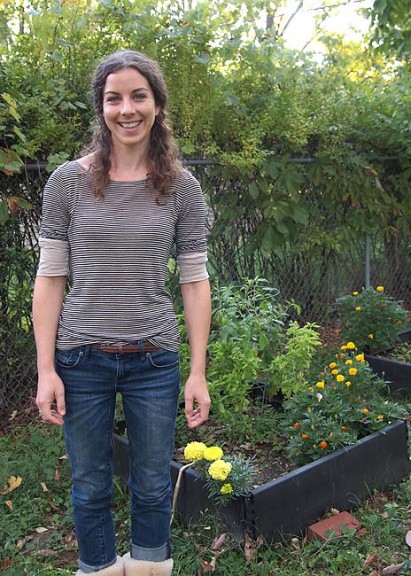 Originally from Jackson, Calif., Jillian Slater moved to Dayton in January, 2011 to begin a job as a library archivist in the University of Dayton’s Catholic Special Collections. Whenever she told people she was from California, they would invariably reply “I bet you would like Yellow Springs.” So one weekend in late winter, she decided to check it out.

On that first visit, Slater hiked in John Bryan and had a meal at The Winds. Enjoying getting out of the city and being in nature, she remembers thinking “I love it here — there’s nature and good food!” After that first experience, she began to visit frequently on weekends, and when she started thinking about purchasing a home, Yellow Springs seemed like a good place to consider. “I just felt really comfortable here,” she recalled during a recent interview.

Even though she was worried about the commute, it ended up being the “right time, right place” and she bought a home in June of this year (Full disclosure: Jillian purchased my house, which is how I originally met her).

When asked about her experience living here so far, Slater described Yellow Springs as a “really welcoming place”, where she’s been able to meet a lot of people. She also appreciates how active the community is, with many people participating in or organizing a variety of activities. Even though her commute and full time job make it difficult for her to be as involved as she would like, she’s managed to take a pottery class at the Community Pottery and attend yoga classes at Yoga Springs. “I would do basically everything if I had the time,” she said, though she is particularly interested in participating in one of the edible plant hikes occasionally offered by the Glen.

The outdoors in general is important to Slater, and one of the things she’s enjoyed most about home owning is having the opportunity to plant a garden. Although she started things relatively late in the season, she’s harvested a few tomatoes and wax beans and has high hopes for the small squash she’s seen growing recently. At least this first year, though, it’s less about the produce and more about the experience.

Luckily the Yellow Springs farmers market is able to supplement her homegrown produce, and she considers it her favorite place in town because it allows her to enjoy local food and support the farmers who grow it. In particular, Slater likes the produce at Patchwork Gardens and sampling the local honey from White Mountain. Not surprisingly, one of her other preferred places is the Yellow Springs Public Library, because the librarians are friendly and she feels that a public library “is a great resource for any community.” Although Ohio might not feel particularly exotic to those who live here, for Slater the state and everything in it is new, and so she has enjoyed exploring the region, taking walks in Dayton’s metroparks and using the bike path frequently.

Slater does have a connection to Ohio through her maternal grandmother, whose nine siblings lived with their parents in both Indiana and Ohio before heading to California to look for work in the early 1930s. Slater’s grandmother was the first one of her family to be born in California, but she still retains a fondness for her family’s original roots in the Midwest.

As different as they are, Slater sees similaries between Jackson and Yellow Springs, including their small size, and their picturesque downtown (Jackson was a gold rush town and still maintains a saloon on the main street.) But over the years it has become decentralized and now the downtown is abandoned, Slater said. She remembers it when it was a more vibrant urban center, and she particularly appreciates the lively downtown culture of Yellow Springs, where people can gather and spend time together. When asked if Yellow Springs is as similar to California as she had been told, Slater pauses. “No, it’s actually really different. Yellow Springs is really unique”.

*Anisa Kline is a freelance writer for the Yellow Springs News.