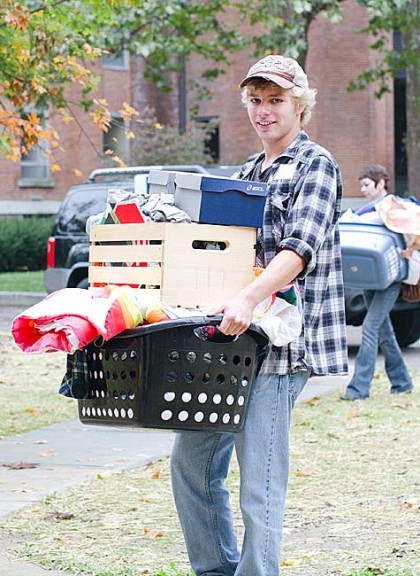 Sam Cottle was one of the 75 students in Antioch College’s second class who moved into newly renovated North Hall last week. The incoming students joined their second-year classmates to start the school’s second year of operation on Tuesday. (Submitted Poto by Carly Short)

Meredith Martin, 20, applied to Antioch College last spring while working on a permaculture project in Mexico. Though the Vandalia native was sure she could learn all she needed to know from nature, she figured that if she could attend any college, it would be Antioch because of its focus on hands-on learning. But the biggest attraction was that Antioch is like a blank canvas, where “there’s lots to be done,” she said.

Martin is one of a new crop of Antioch College students, a cohort 75-strong composed of enthusiastic young people who arrived on campus last week ready to remake the college, which reopened last year. Chosen for their academic prowess, grit and positivity, the second class will continue the hard work begun by its first class of 35, now down to 31 second-year students. And though the first class pioneered the new Antioch by writing a constitution and giving critical feedback on courses and campus life, the next class still has plenty to do.

“After Lewis and Clark went out West it wasn’t like the next group behind them had Howard Johnson,” said Antioch President Mark Roosevelt this week. “It’s a continuing group of people willing to add to their college experience this piece of working with us on refining the model.”

That work is a welcome challenge for many members of the freshman class. Rebecca Smith, the sister of second-year student Rachel, is excited by the chance to craft new school policies. At Antioch, she can affect change, whereas in high school, “there were just rules,” she said. Jacob Branson, of Austin, Texas, wanted a more participatory education rather than to just sit idly in large lectures. And Katie Pitsenbarger, of Dayton, wanted to contribute to the “positive cause” of rebuilding the school instead of blending in at a large institution.

Students came for other reasons too. Antioch’s commitment to sustainability — evident in its curriculum, kitchen, college farm and green dorm — was a big draw, many new students said.

“I like how it’s innovative in terms of being green, but still really old,” said Clara Strong, of Evansville, Ind., who wants to study psychology and dance. In fact, North Hall, where the new class lives and eats, and which was built in 1852, is on track to become the oldest LEED gold certified building in the country, superseding the U.S. Treasury Building, according to chief admissions officer Micah Canal. The $6 million dorm is decked out with a geothermal heating system and a 50-kilowatt solar array that covers nearly every inch of its south-facing roof.

Then there are the perennial Antioch draws: co-op opportunities, the cozy small town of Yellow Springs, the social justice tradition, an acceptance of alternative lifestyles and the fact that Antioch doesn’t have a football team.

As a matter of fact, it was a marketing piece from Antioch boasting that the college has not had a football team since 1929 that caught the attention of Cleo Van der Veen, of Phoenix, especially after receiving scores of brochures from other colleges with cheerleaders on the front, she said. Van der Veen thinks the college will be “a good place to try things out to see what I actually want to do,” she said. And she is charmed by the campus. Even though it’s still half crumbling, with much renovation ahead, she prefers the look to a pristine and sterile campus.

Of course, the four-year full tuition scholarship, being offered to the first four classes of the revived college, piqued the interest of many a prospective student. Following a CBS Moneywatch news story of the full ride scholarship in January, 3,200 applications streamed into the college, which, according to Canal, vastly expanded the scope of interest. The quality of the incoming class is a reflection of that offer.

The 75 new students range in age from 17 to 25, hail from 31 states (with high concentrations from Ohio, California and Texas), and have an average high school GPA of 3.69. They bring the portion of non-white students at the school to 31 percent of the 106-member student body. The students are interested in majoring in the sciences (19), the humanities (15), social sciences (15) and the arts (9), or are undecided (17). Fifteen students are the first generation in their family to go to college, and many have started businesses described by Canal as “somewhere between a popsicle stand and IBM.” One enterprising new student, Leana Combs, who transferred after two months at the School of the Art Institute of Chicago, is already looking to plan a fundraiser on campus for a foundation that promotes diversity and the acceptance of different subcultures.

Students who took action when a need arose were among those favored for admittance to Antioch, Canal said.

“We were looking for people who had shown that when they encounter a roadblock, they navigate around it,” he said.

Despite an overwhelming feeling of optimism and excitement about their impending Antioch adventure, the new students also have their share of concerns. Dartanian McElvish, of Alaska, is worried about the stability of the revived college, but added, “no risk, no reward.” Jaivenna Prince of New Jersey said she feels like she’s “in no man’s land” in a rural area without the noise and lights of a city. “The fact that people say ‘hi’ to you is scary,” Prince joked.

And though the new class had tripled the size of the student body, it’s still a nano-college among private liberal arts schools.

“It will be less challenging for students in terms of the loneliness factor, but there are still only 100 students on campus,” Roosevelt said.

Since the new students arrived on campus it’s been a whirlwind of orientation exercises, community dinners and late nights getting to know one another more informally. An impromptu talent show sprang up on the fourth floor of the North Hall dormitory on Friday night, where someone played the auto harp. McElvish stayed up until 5 a.m. for two straight nights hanging out with new friends. Classes began Tuesday.

The new faces and the North Hall makeover aren’t the only changes on campus this year. There are now twice as many full-time faculty, at 12, and 44 courses are being offered this term. Campus life for Antioch’s first batch of students remained basically in the dorm and classroom, but a wellness center, art and science building and restored library are now in the planning stages, Roosevelt said. Meanwhile, Louise Smith, dean of community life, is expanding the extracurricular opportunities. A two-credit mindfulness course had been added, with more community life classes on the way. And with a critical mass the number of campus clubs is expected to explode. Potential groups may include a knitters club, drama club, science club, events committee, queer center, women’s center, German club or art club.

“It’s really important not only to get [students] here but to keep them here,” Smith said. “Last year I was working really low on Maslow’s hierarchy of needs…but with a lot of our policies more fleshed out, we’re able to do more with student leadership, student development and community development.”

As the new students get ready for the challenge, the first class of the revived college takes on new roles as upperclassmen and mentors. Smith hailed the college’s first class — literally the poster children for the college with their faces plastered all over the college’s promotional items — for their work in pioneering the path for the incoming 75 students.

Even still, the college remains a work-in-progress, its long-term viability unknown. Much is left to discover, said Canal, who likened the college’s revival efforts to the space program, and the work of its first class to early space exploration feats.

“After the Soviets put Sputnik in space, there was a lot left to know, and there still is,” Canal said. “There’s an incredible amount of discovery yet to happen here, and most of the work is still to be done.”

One Response to “New class to continue shaping college”