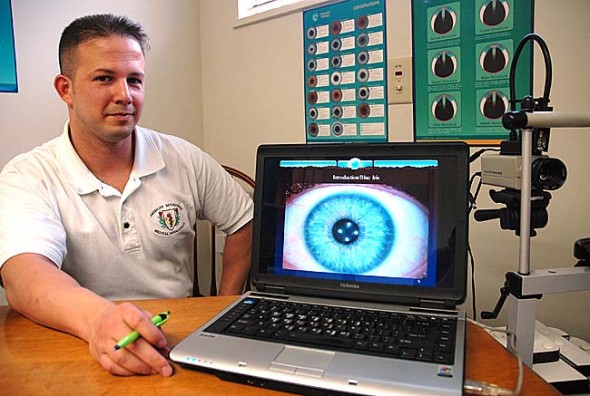 Herbalist and iridologist Eric Rodriguez opened a new healing practice in town, the Culpeper House, this month. He will give a free lecture on natural approaches to winter health on Thursday, Dec. 20, at 6 p.m. in the meeting room at the Yellow Springs Public Library. Rodriguez can identify health issues by looking at a client’s iris. (Photo by Megan Bachman)

To new healer, the eyes have it

Some see eyes as windows to the soul, while others, like local iridologist Eric Rodriguez, also see the iris as a window into the body, revealing a person’s health history, unhealthy habits and future illnesses.

“It’s a blueprint of what you’ve done in your life until now,” Rodriguez explained of an iridology scan. “It’s like a credit score.”

From his new office at 716 Xenia Avenue, Rodriguez analyzes his client’s eyes and dispenses herbal remedies to help them stay well and avoid disease. At what he calls the Culpeper House, Rodriguez offers services from iris assessments to personalized herbal tinctures. Appointments are available starting in January.

Rodriguez will also deliver a free talk on natural approaches to winter health on Thursday, Dec. 20, at 6 p.m. in the meeting room at the Yellow Springs Public Library. Next in his monthly lecture series, on Jan. 17, is natural detoxification for the new year, featuring ways to cleanse and tonify the body.

“I have a love for Yellow Springs and its community environment,” said Rodriguez, who lives outside of Springfield with his fiancée, Tina Spencer. “I designed my practice to do what [other practitioners] do not.”

As a result, the Culpeper House will not retail bulk herbs, teas or vitamins. Instead, Rodriguez blends his own tinctures after learning about the health needs of clients. And he offers a new way to discover what ails people through iridology, which gives insight into one’s physical and psychological makeup on the principle that each part of the eye corresponds to a part of the body.

The name Culpeper House harkens back to the work of Nicolas Culpeper, a 17th-century medical herbalist and astrologer, and to herbalist Helen Leyel, who revived Culpeper’s methods in the 1920s in England by opening a chain of “Culpeper Shops” that sold herbal medicines, food and cosmetics.

Walk into Rodriguez’s office and you’ll find that the Culpeper Shops have been resurrected once again. The decor pays his homage to the “glory days of the herbal pioneers,” Rodriguez said. Stacked in old cabinetry from the turn of the 20th century are dust-covered herbal medicine textbooks dating to the 1870s and antique bottles of castor oil and tiger lily tincture — the pharmaceuticals of their time, which are merely used as decoration (tinctures of opium and coca leaves are not to be found). Elsewhere is a row of fresh concentrated botanical extracts and the place where Rodriguez blends alcohol-based solutions like he was preparing a meal for clients.

“I research back to the way medicine used to be because herbal medicine needs to be practiced the right way,” Rodriguez said of his rear-facing approach. “I’m not emulating them, I’m carrying on their intention, which is to eliminate poisons and take natural approaches to regain homeostasis. Herbs don’t just treat, they normalize. They bring an organ back to its natural function.”

While Rodriguez respects the role of conventional allopathic medicine, especially in emergencies, he believes there is a place for herbs, which can be more effective than chemical pharmaceuticals. That’s because herbal remedies attack the cause of an ailment, not just its symptoms, and because plants and humans “share a two million year history,” he said.

“Herbs have a vibratory effect and the vibration corresponds to vibrancy of the body,” Rodriguez said. “The body and plants share a natural synchronicity which synthetic chemicals do not.”

Rodriguez also studied Cherokee and Shawnee medicine and as a wilderness native skills instructor learned how to heal in the woods with whatever plants he could find. When he first used a plantain leaf to heal an insect bite and stopped someone from bleeding with yarrow leaves sourced from the wild, Rodriguez realized herbalism “isn’t just hocus pocus.”

Before that Rodriguez spent 26 years competing in the martial arts and 10 years in active military duty for the U.S. Air Force.

“I spent years finding out how to hurt people and am now healing people,” he said. He went on to receive his master herbalist diploma and is now completing a complementary alternative medicine degree while he writes a book on food energetics.

Despite his numerous certifications, Rodriguez said his herbal medicine is not accepted because it remains unregulated in Ohio and the rest of the U.S., while it is regulated in England, Germany and Canada. So while Rodriguez officially cannot diagnose or treat disease, he can consult, educate and prepare remedies using FDA-approved herbs, he said.

Likewise, Rodriguez can glean general health information from iridology readings, but must stop short of diagnosing a specific illness. He likes to start sessions by looking at a patient’s eyes so he can see their true state of health. Going into the study of iridology, Rodriguez said he was an “open-minded skeptic” but came out a convert when a reading of his own iris was spot-on.

“[The iridologist] told me I eat standing up, like sweets after I eat and am a perfectionist —she saw all of that in my iris,” Rodriguez said of that first reading.

Rodriguez went on to study iridology in California with the daughter-in-law of Bernard Jensen, an American chiropractor who in the 1950s reintroduced the 19th- century practice of iridology. Rodriguez uses a device similar to that found in an optometrist’s office to look at the density of the neural fibers in the iris, the colored part of the eye. Gaps, faded areas and pigmentation reveal which areas of the body are experiencing problems. There are biological reasons for the eye-body connection, Rodriguez said.

“Eyes have neuro-optic reflex nerves that are connected to the spinal cord and the central nervous system,” he explained. The principle is similar to how reflex points in the hands and feet correspond to body parts in reflexology, he added.

But Rodriguez only uses iridology assessments in conjunction with other fact-finding about a person’s diet, lifestyle genetic predispositions, health strategies and stress levels (“What you’re eating is not as important as what’s eating you,” he said). Using a variety of methods, Rodriguez above all believes in treating the individual and using herbs as tools.

“Everyone has their own temperament and biological makeup so every person is different and every medicine has to be individualized,” Rodriguez said. Herbs merely assist the body in returning to its natural state, he added.

“The body is always on our side,” he said. “It’s always trying to get healthy. Until you expire, the body is trying to keep itself alive.”

Rodriguez specializes in women’s health and anti-aging. For more information and to make an appointment call 937-536-9369 or visit http://www.culpeperhouse.com.