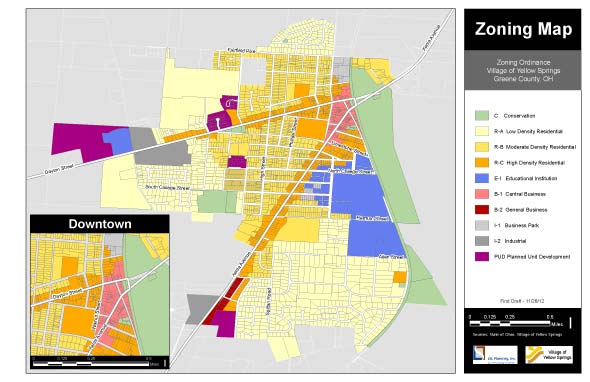 To see a larger version of the revised zoning map, please click on the link below at the end of the article.

Updating the Yellow Springs zoning code to better reflect village values, including promoting multi-use neighborhoods and eclectic housing and economic development, was one of the top priorities cited in the 2010 visioning project. In the past two weeks, Village Council and Planning Commission met twice to review a draft of that update, completed in August after a year’s work by consultant Paul LeBlanc and the Technical Review Committee, a group of local officials and citizens.

The revision allows smaller lot sizes to promote density, according to TRC member Lori Askeland, who said the group hoped to “create a more walkable, bikeable town,” one that is “attuned to how Yellow Springers live and work.”

While officials and TRC members applauded the proposed zoning code draft for its new clarity and usability, several raised concerns that the revised code could end up making local development less likely, rather than more.

“I appreciate that the new zoning code is clear but hope we can have a code that allows the village to flourish and grow rather than contract,” said TRC member Marianne MacQueen at the Dec. 4 meeting. “My concern is that this code means we don’t have more economic development and not much housing development.”

But the challenge of any zoning code is to balance the rights of citizens in a community, according to Planning Commission Chair Matt Reed at the Dec. 10 meeting.

And according to LeBlanc on Dec. 4, “This comes down to philosophy. Are we more concerned with protecting neighborhoods or allowing people to do anything they want? We wanted to be flexible but to protect neighborhoods as a living environment.”

The previous code, which dates back to the 1980s, was both out of date and difficult to use, TRC members stated when introducing the revision in August. The group aimed for a revision that would carry out the visioning goal to “ensure desired village character, improve affordability and support economic vitality.” They also stated that the revision process was more a tweaking of the old code than a major overhaul.

TRC members are Ted Donnell of the Board of Zoning Appeals, Marianne MacQueen, Steven Conn, Lori Askeland of Village Council and Matt Reed of Planning Commission.

Home-based occupations were a focus of both the Dec. 4 and Dec. 10 meeting, with some concerned that the revised code would make it harder rather than easier for villagers to work out of their homes.

“I would like the new document to allow the things we’ve done through the years that are not a problem to continue,” said Rick Walkey. “This should promote how we see ourselves and how we conduct our lives.”

At issue are several aspects of the revised code’s restrictions on home-based occupations, which are defined as businesses located in the home with no more than one outside employee. Ironically, many Yellow Springers have been working out of their homes with no problems, since the old code was so complicated that it was rarely enforced. However, the revised code, which places a variety of restrictions on home businesses, would be more likely to be enforced, possibly ending up in a less business-friendly environment, some said.

For instance, the revised code identifies home businesses as a conditional, rather than a permitted, use for residential districts, meaning that those wanting to have a business at home need to come before the Planning Commission to seek approval.

“I think it’s onerous for many people to come before Planning Commission,” Judith Hempfling said. “These have been happening in the village for years, and I hate to see it become more difficult.”

“We need to preserve the options for those who live in this community and also want to work here,” she said.

But the zoning code also needs to protect neighborhood residents who have a right to not endure too much traffic and noise, according to TRC member Steve Conn.

“It’s the fear of the UPS truck,” Conn said at the Dec. 10 meeting. “We needed to balance home office uses with people’s fears about an increase in traffic.”

Council needs to direct LeBlanc, who oversaw the code revision, if the Village wants him to prioritize freedom for home-based entrepreneurs over potential neighborhood nuisances, according to Conn.

Another questionable restriction for home business in the revised code is that the business is not allowed to take up more than 20 percent of the house space.

“It doesn’t make any difference how much space it takes up in the home,” MacQueen said. “If it doesn’t have a negative impact in the neighborhood, what’s the difference?”

But home-based businesses can “destroy neighborhoods” according to Village Manager Laura Curliss, if the business takes up so much space that the resident no longer lives there.

Council and Planning Commission members agreed that the revised code should specifiy that the resident must live in the house.

Both MacQueen and Hempfling urged Planning Commission to research zoning codes in communities with similar values. For instance, the code in Amherst, Mass., is less restrictive of home-based occupations, Hempfling said.

The zoning code revision will next go to Planning Commission, whose members will incorporate the feedback from the recent meetings. The Planning Commission meetings will take place Jan. 14 and 28, after which the revised code will return to Village Council for final approval in February. Council has stated it hopes to approve the revision within a few months.

At the Dec. 10 meeting, Council and the planners also considered the recently completed Village zoning map, which can be accessed online at ysnews.com or http://www.yso.com. Topics included how best to zone multiuse areas in town, such as near Electroshield on High Street, in a way that promotes multiuse but also preserves neighborhood character.

The draft of the revised code can be accessed online at the Village website, http://www.yso.com.

View or download the current and revised zoning charts here.