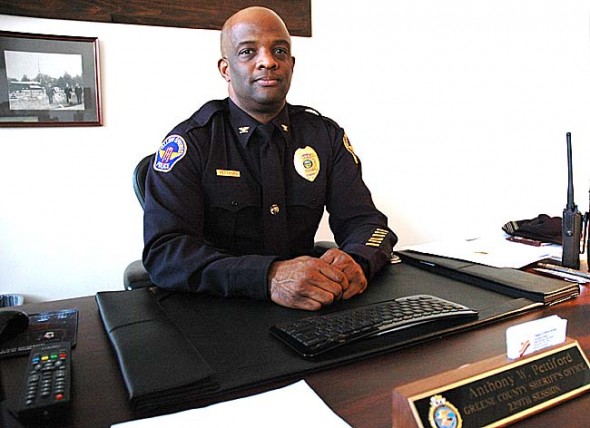 When Yellow Springs Police Chief Anthony Pettiford was growing up in the village, the town was a place where everyone seemed to know everyone else. Consequently, kids didn’t get away with much.

“As a child, you had a whole lot of parents,” he said.

Pettiford grew up on Herman Street, across from what’s now the Friends Care Community. His local roots go back generations: his grandfather was one of the town’s first barbers, and his grandmother worked for Ernest Morgan at Antioch Publishing. Pettiford’s father, Paul Pettiford, worked at Vernay for 36 years, and his mother, Betty, who still lives in the family home, worked for Antioch College.

The town felt very safe, and an important part of that safety was the presence of the local police.

Especially larger than life was former Chief Jim McKee, a role model who was rare back then, of a policeman who, like Pettiford, was African American.

“Growing up, seeing black police officers inspired me. It’s one of the reasons I got into law enforcement,” he said.

After a 30-year career, Pettiford recently fulfilled a lifelong dream by following ­McKee’s footsteps and serving as the police chief in his own hometown. He began his new duties last month, after the retirement of Chief John Grote last spring.

Pettiford sees himself as continuing in the tradition of McKee, who championed a hands-on variety of community policing.

“We have to be intertwined with the community,” Pettiford said in an interview last week. “We have to make sure we’re getting out of our cars and talking to people.”

Pettiford also wants to continue McKee’s emphasis on local police serving as role models for young people. He hopes to meet soon with Yellow Springs High School administrators to brainstorm ways that police could be helpful to local youth, perhaps by offering programs in the schools.

And Pettiford plans to continue the community involvement fostered by the department’s Coat Fund, which buys warm clothes for local children in need. On his second day on the job last month, he accompanied local kids to purchase coats, and found the experience gratifying.

“When you’re riding around town and see kids out playing in their new coats, it gives a good feeling,” he said.

But Pettiford sees his initial challenge on the job as beefing up his department, which has been short-staffed for years. He currently has six full-time officers and five part-time, and is looking to hire two more part-timers. With that size staff, he will reach his goal of having two officers on duty at all times, which he sees as critical for the safety of not only the officers but of the community.

“That will make us comfortable,” he said.

Pettiford brings to the job three decades of experience in a wide variety of law enforcement positions. He was hired at age 21 by the Greene County Sheriff’s Department, which sponsored his training at the Ohio Police Academy. After starting out as a corrections officer, Pettiford went on to serve as a patrol officer, then a field training officer, evidence technician and the department’s first canine officer. He was promoted to patrol sergeant, then lieutenent, then major of operations. During those times he received higher training at the FBI Academy and Northwestern University.

“I’ve been blessed with many opportunities,” Pettiford said.

After he retired from the department, Pettiford served for one year as the Ohio Homeland Security’s liaison for southwest Ohio, before being hired as chief of police at Central State University. When Chief Grote announced his plans to retire, Pettiford was encouraged to apply for the Yellow Springs position, he said.

While he brings to the job a wealth of experience, Pettiford feels his essential philosophy of police work is the same as when he began years ago.

“My upbringing taught me to treat everyone with respect,” he said. “To treat each call the way you would want your mother or sister to be treated.”

Overall, Pettiford believes that the village remains, 30 years after he grew up here, one of the safest communities he knows, which is why he chose to raise his own family here. And a large part of that safety depends on villagers feeling comfortable coming to the police with their concerns.

“I want to encourage community involvement,” he said. “We get most of our information not from technology but from the public, neighbors looking out for neighbors.”

While drug use has been an ongoing issue in the village, Pettiford doesn’t see Yellow Springs as having a larger drug problem than other communities. He wants his officers to do what they can to control drug use, along with showing “that we have zero tolerance” for drugs.

In general, he said of the village, “We have our problems, but they’re nothing like what you see on TV.”

In his first month on the job, Pettiford has been welcomed with open arms by “a great staff,” and he looks forward, at age 51, to many years on the job. He’s a marathon runner who feels young and healthy, and he hopes “to stay as long as I can.”

And he looks forward to carrying on the local community policing traditions that have worked well over the years.

“I plan to continue to build on the foundation of previous chiefs,” he said.