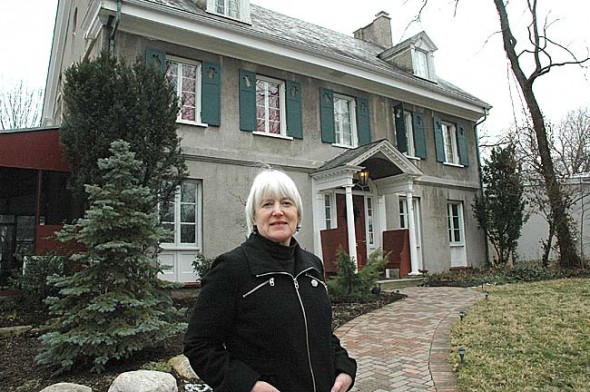 Susanne Oldham, owner of the Arthur Morgan House Bed and Breakfast, hopes to sell the property and business on Limestone Street and do more traveling. (Photo by Lauren Heaton)

B & B for sale by innkeeper

The Arthur Morgan House spent many more years as a home for visitors than it ever did as the home of former Antioch College President Arthur Morgan and his wife Lucy, who built the house in 1921. And though much of its charm is related to its history as a home of the college, it’s been humming as the town’s only sustained bed and breakfast for about 27 years. Current innkeeper and property owner Susanne Oldham has spent the past nine years working to get the place running in top shape again, and as she sets her sights on other possibilities abroad, she is offering a turn-key business to someone who could hop on the train and keep rolling.

Oldham had never worked in the hospitality industry before she and her partner decided in 2004 to purchase the Morgan House and reopen it after nearly a year of closure. She was a Peace Corps volunteer in Southern Africa at the time, serving as an HIV administrator. Before that she spent 10 years at the Folger Shakespeare Library in Washington, D.C., and had also spent many years managing professional chamber music ensembles. “I didn’t really know what I was doing, but I found that a lot of it is common sense,” she said.

She renovated the building, replacing most of the roof and chimney and adding bathrooms to every room. She asked local artist Tia Acheson to paint murals of the African savannah and other habitats around the house, and former local artist Robin Zimmerman to silk screen a variety of native birds, after which the rooms are named. Then she spread the word that the Morgan House B & B was open again for business. And ever since, Oldham has been wearing the reservation cell phone on her hip and cooking up a breakfast storm — coasting through her best year ever last year with bookings well above the 50 percent national average.

“My partner John said this is the best thing I’ve ever done,” she said. “It’s been a lot of fun, and I’m really going to miss it.”

In particular, Oldham has enjoyed meeting the guests who come from far and wide. Having seen advertisements online and one especially prominent spotlight in the Lonely Planet travel guide, guests have come from as far as Australia, Zambia and North Africa, and the house receives about one or two visitors from Europe every month. They come to Dayton, home of the Wright Brothers, to visit, but they come to Yellow Springs to stay, Oldham said. An attractive bed and breakfast within walking distance to coffeehouses, restaurants, parks, a yoga studio and several music venues is quite a find, she said.

As Yellow Springs is the town Oldham grew up in and knows quite a bit about, she is a good resource for her guests as well. She sends them to the Clifton Gorge, Cedarville Indian Mound, the Springfield Art Museum and many of the local restaurants. And she tells them the little-known history of the area, starting with the story of how there came to be an Antioch College and an Antioch University in this small town.

“I straighten out a lot of people about that,” she said.

She tells them that if the Mason-Dixon Line that forms the southern border of Pennsylvania, were to continue west of its end in West Virginia, it would go right between Xenia and Yellow Springs. It’s a good launching point, she said, for stories about Wheeling Gaunt and the Conway Colony of freed slaves who settled in the village after the Civil War. And the history of the Morgans themselves has been of great interest, including their work at the college, and Arthur’s part in helping to establish and direct the Tennessee Valley Authority, one of the first federally owned hydropower and regional development agencies.

The Morgan House guests, in turn, are so fascinating they end up entertaining Oldham as well, she said. One guest had come from Tazmania to follow now-President Obama during his campaign tour. Two more recent guests were the publisher and photographer of several horticultural books about Ohio’s mushrooms and Columbus’s historic Secrest Arboretum.
And occasionally, the relationship between guest and innkeeper went so well that several of the Morgan House’s repeat visitors decided to move here and become one of the storied locals.
The bed and breakfast has been a lot of fun for Oldham, but it’s also very demanding. And though it’s a consolation that the laundry room, with three walls of windows and a mural on the fourth, is possibly the prettiest room in the house, making the business run is still a job. And Oldham, who still keeps in touch with friends from Zimbabwe, longs to return to Africa to explore other opportunities. After nearly a decade in hosting, she feels she has done what she wanted to do and can now move on to new adventures, and has put the business and house on the market for $569,000.

For someone else, the gears of the Morgan House are greased and ready to continue the momentum she started.