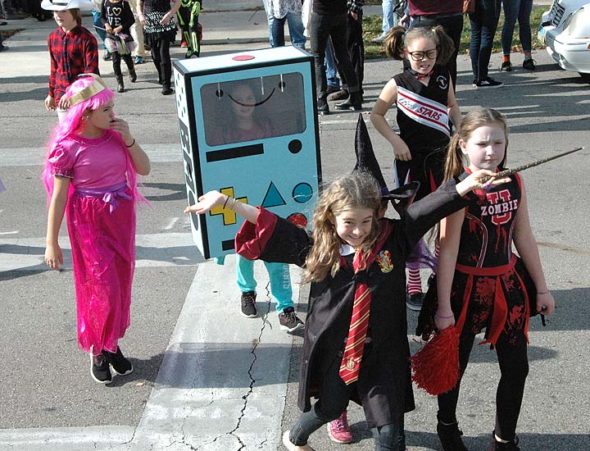 Critters just kept streaming out of the maw of Mills Lawn School. Bringing up the rear, from left, are Miette Murphy, Eloise Murphy, and Anah Smith watch as wizard Liliana Herzog gestures wildly with her wand, hopefully not transforming co-marcher Alayna Hamilton at her right. (Photo by Matt Minde)

Mills Lawn School’s annual Halloween Parade through downtown Monday brought out the beauty as well as the beast in everyone. The smaller monsters, gnomes, fairies, robots and assorted characters were chaperoned by their older fifth- and sixth-grade “buddies.” At the end, everyone shuffled into the gym for a fantastical assembly of joking, ­singing, clapping and generally controlled mayhem, before being unleashed a half-hour later to prepare for an evening of trick-or-treating. (Photos by Matt Minde)