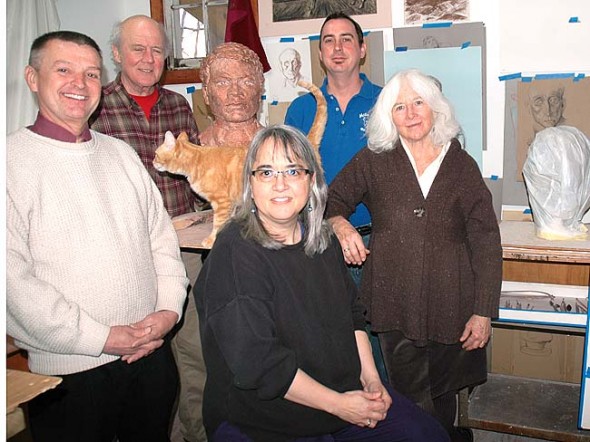 The Yellow Springs Experience: National Bronze Sculpture Symposium, to take place at Antioch College in October, will bring three artists to town to join local sculptor Brian Maughan in creating a dozen small sculptures. The finished pieces, after being cast in bronze, will then be placed on a sculpture trail. Shown above in Maughan’s Walnut Street studio (with his bust of Wheeling Gaunt) are project sponsor representatives, from left, Jerome Borchers of the Yellow Springs Arts Council; Maughan; Matt Housh of Yellow Springs schools and Dennie Eagleson of Antioch College. In front is project manager Joanne Caputo. (Photo by Diane Chiddister)

As with many Yellow Springs initiatives, the upcoming Yellow Springs Experience: National Bronze Sculpture Symposium, to take place in October 2013, grew from a series of local conversations, of villagers talking to each other.

One conversation began with sculptor Jon Hudson, who for the past 20 years has taken part in International Sculpting Symposia, a program in which municipalities the world over invite selected sculptors to produce public art. During a multi-week event the artists create large-scale sculptures during a public viewing process that enables people to see artists at work. In the end, the artist receives an honorarium and the city gets reasonably-priced public art.

Having taken part in about 30 symposia in places such as Turkey, Russia, Japan, South Korea and Taiwan, Hudson has talked with friends and fellow artists about the experience, and dreamed about bringing a similar arts event to town.

Other conversations began with a second villager, who wishes to remain anonymous. On a trip to New York City, this Yellow Springer was inspired by small bronze sculptures that had been placed in subway stations and on city streets. Why, this person wondered, couldn’t the village have similar public art?

And a note of synchronicity came from local history. During the 1920s Arthur Morgan founded the Antioch College foundry with the goal of reviving the “lost wax” method of casting small bronze objects, possibly as a vehicle for educating art students. The foundry later evolved into Morris Bean Incorporated, after student Morris Bean took it in a commercial direction.

These conversations, which also included a newly energized local Arts Council and a school system embarking on project-based learning, sparked a new, ambitious arts event: the Yellow Springs Experience: National Bronze Sculpture Symposium. The event, which coincides with the Artist Studio Tours, will take place Oct. 13–26, on the Antioch College campus, near the site of the old bronze foundry between the former college art building and the amphitheater. Partners in the event, besides the college and Arts Council, include the Yellow Springs Chamber of Commerce, the Village of Yellow Springs, sculptor Hudson and the local public schools.

“The Bronze Symposium is a perfect complement to Yellow Springs’ national reputation as a vibrant and livable arts community,” according to Chamber of Commerce Director Karen Wintrow in a press release. “There’s an ongoing commitment to the arts, which in turn, creates a community that is constantly growing, evolving and creating.”

National and area sculptors will be selected by a national committee to take part in the event. The sculptors, over a two-week period, will each create three original pieces using an abstract theme, after which the pieces will be cast in a public bronze pouring. The public will be invited to witness the sculptors’ creative process, and at the end the Village will own a dozen new pieces of bronze public art, which will be sited on a yet-to-be-chosen Bronze Sculpture Trail. As part of the project’s fund-raising plan, one sculpture from each artist will also be cast and auctioned.

One of the sculptors, villager Brian Maughan, has already been selected;  one of the remaining three will be from Ohio and the others from anywhere in the country.

“I’m excited about participating and about doing more abstract work,” Maughan said this week. Traditionally, bronze sculpture has tended to be representational rather than abstract, he said, and he has earned a living from commissioned representational pieces the past 30 years. But Maughan began his artistic career working with abstract forms and is looking forward to getting back to them.

A significant aspect of the project will be educational, according to Joanne Caputo, the event project manager. Yellow Springs High School Principal Tim Krier and art teacher Elisabeth Simon are planning to involve high school students in creating a sculpture trail on the high school campus. Elementary school students will be involved as well, although those details haven’t been finalized, she said. And students from the Dayton STEM Academy, Clark County’s Project Jericho and Kettering public schools are also expected to participate.

“This is all about sharing and education,” Caputo said.

However, organizers have already obtained a good chunk of that amount from an anonymous gift of $25,000 that was matched by a $25,000 grant from the Morgan Family Foundation. Recently, the Yellow Springs Community Foundation kicked in $3,000, and grant submissions have been made to the National Endowment for the Arts, the Ohio Arts Council, the Kroger Foundation and the DP&L Foundation, Caputo said.

The process of making art has historically been a collaborative one, according to Maughan, who sees the Bronze Symposium as a way to revive that spirit of collaboration, an opportunity for the artists to discover new ideas and get to know each other as well as creating new work. And the theme of collaboration will extend through all aspects of the event, with partnerships between the sponsoring organizations and participating school systems.