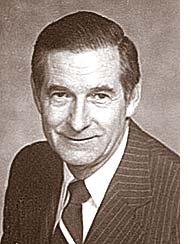 John Thomas Laughlin, 60-year resident of Williston Park, N.Y., died on March 3 in hospice. He was 87.

John was born on Dec. 2, 1925, to James Laughlin and the former Mary Mulligan, both relatively recent immigrants from Ireland. This was a time when even a boy in Jamaica, N.Y., could still roam local woods and fields, and get a bellyache (“for cryin’ out loud!”) from eating peaches, grapes and apples pilfered from the neighbor’s yard.

John lost both of his parents at a tender age, and when the siren song of WWII sounded, he enlisted in the U.S. Navy as a stripling of 17, not even waiting for high school graduation. Fortunately, his wartime experience in the Pacific Theater was not especially hazardous, and in later years, he entertained his children with stories of his escapades, including swimming with a monkey in the Philippines, and rescuing a Chihuahua hanging on for dear life to the pitching deck of a ship. Even today, his kids and grandkids can sing all the verses of “The Ballad of the 455,” commemorating the LSM that carried him across the seas.

Johnny met the love of his life, Pat O’Toole, while selling tickets to a church dance, and asked her to be his date. They were married two years later, on Nov. 26, 1949. On their wedding night, spent at the St. Regis Hotel in New York City, John opened a package of mouthwash, and found this serendipitous prediction on the inside wrapper: “Tonight will be wonderful!” It must have been: this past Thanksgiving, John and Pat celebrated 63 years as husband and wife.

The happy couple welcomed six children into the world, and John was a devoted dad. Each December saw a veritable feast of gifts under the Christmas tree, the result of John working several jobs, and spending nights in the garage turning neighbors’ outgrown bicycles into shining chariots. John loved to travel, and almost every year there was a vacation of some sort, frequently involving camping, fishing and hiking, as well as visits to sites of historical interest, especially forts and battlefields of the American Revolution, the War of 1812 and the Civil War.

Although John had to abandon plans for a degree in electrical engineering when all those kids started coming, he was always curious and spent many, many hours in self-educational pursuits. He hated to waste time, and combining this pet peeve with his love of learning resulted in lists of German verb conjugations posted in the bathrooms and by the telephone.

John could do — or fix — anything! He was a master carpenter, efficient electrician and plumber, and could kill the biggest, hairiest spider without flinching. He was a talented writer, seeing an interesting story in the most mundane circumstances. He also loved poetry, and gave frequent recitations of his favorite piece, “The Highwayman,” by Alfred Noyes (“…tlot-tlot…”), to great acclaim.

John was a charter member of a local poker group and played for over 50 years, not often winning, but always having lots of fun. One of his favorite activities was singing with the Long Island Harmonizers Barbershop Chorus, and his quartet, the Long Island Express.

In lieu of John’s wish to be fired out of the torpedo tube on a submarine, a mass of Christian burial was celebrated at St Aidan RC Church in Williston Park, with interment at Holy Rood Cemetery.