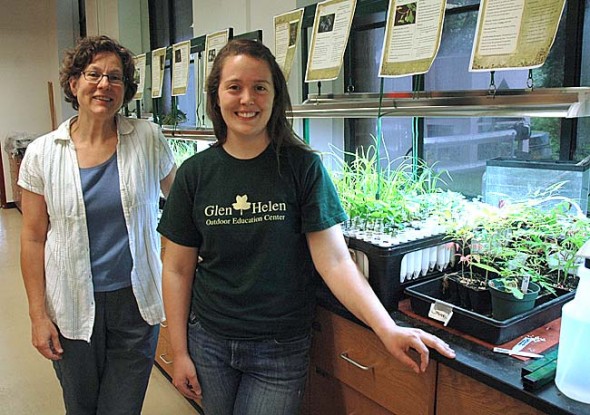 Antioch College environmental science professor Linda Fuselier, left, and Glen Helen extension naturalist Jennifer Lang will use a grant from the National Center for Science and Civic Engagement to launch an education and action program this fall to replace the Glen’s invasive honeysuckle with native understory species. (Photo by Lauren Heaton)

If one of the key components of an effective education is giving people the tools to make positive change, then Antioch College, Glen Helen and the host of conscientious villagers here are in a strong position to help save the environment. Yellow Springs is what Antioch environmental science professor Linda Fuselier calls a “perfect storm of opportunities in science education.” And she hopes to leverage the local resources to mount a campaign to get rid of the invasive species of honeysuckle bushes that have been taking over the Glen like a plague for the past five decades.

To support these efforts, Fuselier recently acquired a $50,000 grant from the National Center for Science and Civic Engagement to use over a three year period toward both curriculum development and community action related to the honeysuckle problem. In partnership with the Glen and the Marianist Environmental Education Center in Dayton, the aim is to educate both students and community members about the loss of biodiversity caused by the proliferation of honeysuckle in the Glen and get them involved in a reforestation project to reseed the Glen with native species.

Recently in the basement of the Antioch College science building, Fuselier, a botanist, has been tending beds of baby spicebushes, sumac, goldenrod and sedge. The native Ohio plants are understory shrubs found in the older growth part of the Glen. But the parts of the Glen that were farmed before they were incorporated into the preserve lacked a strong showing of native plants and were more vulnerable to invasive species, especially ones such as honeysuckle, which changes the soil’s natural microbial content and has a lilopathic effect like poison to many native species.

The Glen has perennially organized volunteer groups to pull honeysuckle, garlic mustard and euonymus, and last year received a grant from the Nature Conservancy to restore 2.5 miles of riparian zone along the National Scenic River that runs through the Glen. But in many areas of both the north and the south Glen, the determined invasives have gotten ahead of the removal effort. And even where invasives are removed, something new must replace them in order to stave off a new honeysuckle onslaught.

“You can’t do forest restoration without planting,” Fuselier said. “You need to remove the honeysuckle and get native plants established and hopefully beat the honeysuckle.”

Fuselier taught at Minnesota State for eight years before coming to Antioch last year for the college’s second year of operation. As a SENCER fellow with the Center for Science and Civic Engagement with a background in ecology and evolutionary biology, Fuselier has long been committed to teaching science that involves civic engagement. And she found that Antioch College had historically cultivated that kind of education on campus and within the surrounding community. So as soon as she got here, she jumped right in to get a small grant from the Llewelyn Foundation inviting both students and local senior residents to a series of academic workshops on how a restoration of the Glen would work and what techniques could be used for successful seed propagation, including how to break seed dormancy. The group then applied the lessons and began propagating the native bluestem grasses, papaws and joe-pye weed under lamplight in the science building basement and recently restored college green house before being planted in both the Glen and at the college farm.

In some ways the NCSCE grant is an extension of the first grant, in that its goal is to engage both students and community members to use information to enact some good. This time, Fuselier will work with the Marianist Center, Glen extension naturalist Jennifer Lang and the Glen’s Outdoor Education Center naturalists to engage the dozens of grade school students the Glen sees each week at school camp in the forest restoration project. The effort will start in the fall, with the planting of a demonstration garden at the trailhead behind the OEC main lodge.

“The Glen does so much already with Antioch College back on line — this is a perfect time to pull all these things together,” Fuselier said.

Fuselier and Lang will attend a conference with the other grant recipients this summer before launching the program here. The Marianist center has been practicing hands-on restoration ecology for over 25 years, integrating woodland restoration into environmental stewardship workshops. In the future, Fuselier hopes to reinvolve the seniors in the replanting project as well.

“This is a good opportunity to get a bunch of groups involved in one project,” Fuelier said. “People think that plants are there, and they just grow. But sometimes they need a little help.”