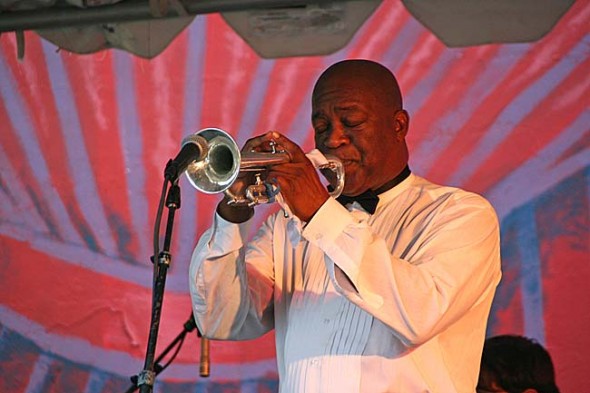 Dean Simms of Springfield will bring his band and impersonation of Louis Armstrong to this year’s AACW Blues, Jazz and Gospel Fest, which takes place next weekend at the Antioch College amphitheatre. Simms, who will appear next Friday, Aug. 23, is shown at the 2012 Blues Fest. (photo by Suzanne Szempruch)

A blues singer from Uruguay will make her first appearance at this year’s AACW Blues, Jazz and Gospel Fest, to take place Aug. 22 through 25 at the Antioch College amphitheatre.

The singer, Virginia Martinez, contacted Blues Fest organizers because she’d heard of the event and wanted to perform, according to Karen Patterson. When Patterson told her that unfortunately organizers couldn’t cover airfare from Uruguay, Martinez said, no problem: her country’s cultural ministry would foot the bill.

“She’d heard about our little festival,” Patterson said this week. “Little AACW and Yellow Springs — we’re making bridges. This event is about building bridges and making connections between Yellow Springs and the world with the wonderful gifts from world and local musicians.”

No stranger to blues festivals, Martinez has performed with, or opened for, Shirley King (daughter of B.B.), John Primer, Kim Wilson, Billy Flynn and King George, among others. She will perform on Friday, Aug. 23. Other performers that night will be The Carl Schumacher Band and Springfield’s Dean Simms and his “Satchmo” show.

The festival’s first event, called Blooz N Pomes, will take place Thursday, Aug. 23, on the stage at Peach’s Grill. The spoken word and musical event, which features DJ Profit from Atlanta, is free and open to the public, and festival musicians will back up poets taking part in the reading, according to Patterson.

Following Friday evening festivities, the annual Innovation Stage, hosted by Karen Patterson, will kick off at 2 p.m. Saturday afternoon on the Antioch College Amphitheatre grounds. This event features jamming and teaching by festival musicians, and everyone is invited to bring their instruments and take part.
“No instrument? We have kazoos waiting for you,” Patterson said.

The festival’s Saturday evening festivities begin at 7 p.m. with local rap group Village Fam, followed by R&B and blues singer Gilia from Atlanta. The local group Bluzion, featuring Gerry Greene, will follow, after which The Nerak Roth Patterson Band will take the stage. The festival highlight comes around 11 p.m. on Saturday night, when festival musicians come together for the Blues Summit.

On Sunday, the festival concludes with the Gospel Fest, starting at 5 p.m. on the amphitheatre grounds. The public is invited to bring blankets and picnics in a basket to honor the Southern tradition of a “basket meeting.” Several local businesses have donated baskets to be auctioned off at that time.

In its 16th year, the AACW Blues Fest was the brain child of Faith Patterson, the mother of Karen and Nerak, and each year it has grown in participation and activities, organizers say. Along with the music, the event includes a festival bazaar and a beer and wine garden, all of which give the festival “the comfortable and down-home feel of a huge family that celebrates its growth and diversity proud and out loud,” according to organizer Aurelia Blake.

One Response to “The 16th annual AACW Blues Fest­— Blues, jazz and gospel to reign”