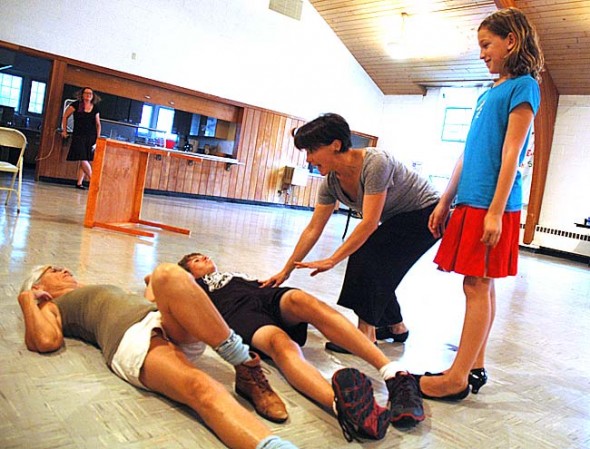 Professional choreographer Wanda Strukus of Boston (second from right) worked with the cast of The Threepenny Opera last month. Actors pictured are, from left, Ali Thomas, Jack Lewis and Isaiah Crawford.Center Stage’s production of the Berthold Brecht musical opens for a two-weekend run on Friday, Sept. 27. (Photo by Megan Bachman)

How does a small theater company stage the epic 1920s Bertholt Brecht musical, The Threepenny Opera, with its celebrated songs by composer Kurt Weill, massive dance overtures and biting critique of capitalism?

In Center Stage’s most ambitious production yet, the revived theater company is relying on many of its stand-by actors, bringing in some new faces, and giving the play, set in 19th century London, an updated steampunk aesthetic. The company also recently enlisted the help of a professional choreographer to lead a cast of mostly non-dancers in its sprawling jazz-influenced song-and-dance numbers, like the prologue overture, “The Ballad of Mack the Knife.”

Center Stage’s production of The Threepenny Opera opens for a two-weekend run on Friday, Sept. 27, with a performance at the John Bryan Community Center at 8 p.m. Show times then are 8 p.m. on Saturday, Sept. 28, and 2 p.m. on Sunday, Sept. 29. The show continues the following weekend, Oct. 4–6.

The Threepenny Opera is directed by Lorrie Sparrow and produced by Kay Reimers with musical direction by Sam Reich.

Not only is The Threepenny Opera the first musical for the revived Center Stage, it is a non-traditional musical at that. Billing The Threepenny Opera as an “opera for beggars,” German artists Brecht and Weill transformed traditional opera forms and created a new kind of musical theater. They are credited with influencing shows like Cabaret and Chicago. The songs don’t fit seamlessly into the plot — they stand out as self-contained pieces that advance the story, often telling more with the flavor of the music than the song lyrics, according to Sparrow.

Choreographer Wanda Strukus of Boston worked with the cast of The Threepenny Opera over two weeks last month during intense — and hot — three-hour rehearsal sessions in the un-airconditioned Westminster Hall at the First Presbyterian Church. There she has crafted the movements to musical numbers that define the show.

A longtime acting friend of Sparrow, Strukus flew in for rehearsal on her own dime. To Sparrow, Strukus brings a “surprising sense of theatricality” to her movements that will make the audience both think and feel. Struckus is more than willing to give her time to choreograph one of her favorite plays.

“One of things I like about [the show] is that there is this story and the musical numbers break out of it,” Strukus said. “Suddenly you are in Vaudeville, then you’re doing the tango. There are a lot of musical styles we get to play with. We’re having a lot of fun with it.”

Reimers said that Strukus has brought a depth to the show and fully anticipates that The Threepenny Opera will be a crowd-pleaser. The audience will be familiar with many of the songs, including the popular “Mack the Knife,” which has been recorded by Louis Armstrong, Bobby Darin, Ella Fitzgerald and others, and “Pirate Jenny,” which has been covered by the likes of Nina Simone and Judy Collins.

Troy Lindsey, in his second Center Stage production, is playing the lead role of Mack the Knife. A professional actor who taught at Second City in Chicago, Lindsey is looking forward to playing the character that goes from a bandit to a banker in the show.

In her first Center Stage appearance, Levi Cowperthwaite, who hasn’t acted since middle school, plays the part of Polly Peachum, the daughter of the “Beggar King.” To her, the message of The Threepenny Opera is that the “poor can only take so much abuse before they fight back.” The experience of community theater has been inspiring.

“It’’s really nice because people have lives and families but they care so much about what they’re doing,” Cowperthwaite said. “It’s flexible and casual but we take it seriously.”

Sparrow, who also plays Pirate Jenny, is thrilled to be directing and acting in one of her favorite shows. Sparrow is donating her time to Center Stage and does community theater “for the love of it.” So far Sparrow is impressed with her group of local actors, who have risen to the challenge of The Threepenny Opera.

“It’s a challenge but the thing that always impresses me with Yellow Springs is you can throw difficult things at them and they don’t just do it, they do it with excellence, and that speaks to the community,” Sparrow said. “People have lives and they’re showing up here and dancing for three hours.”

Center Stage operated out of its Dayton Street theater for 30 years before closing in 2003. Reimers spearheaded its rebirth in 2011 and has since put on three shows — The Cherry Orchard, Our Town and The Crucible — and this October will produce its third-annual, 10-minute play festival. Though Center Stage was grateful to receive a $2,300 grant from the Yellow Springs Community Foundation to cover the costs of production, the young company mostly survives on ticket sales.

“Luckily we always have a good-sized audience — we have a loyal audience,” Reimers said. At this spring’s production of The Crucible, three out of the four performances were sold out, she said.

At its heart, The Threepenny Opera is about inequity as it confronts the audience with the realities of lives of the “haves” and the “have-nots,” according to Sparrow. Because of the adult content, she recommends that parents use discretion in bringing children younger than 13.

The Threepenny Opera was first staged in Berlin in 1928 and was performed 10,000 times before 1933, when Brecht and Weill were forced out of Germany. The message is still as valid now as then, according to Sparrow.

“The message is — don’t feel sorry for those who don’t have,” she said. “Get mad and do something about it.”