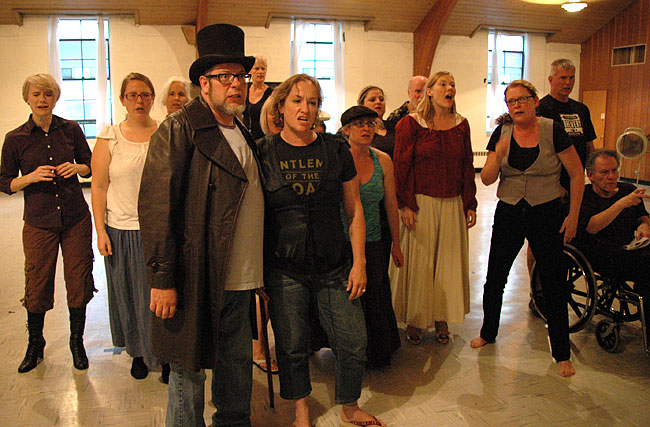 The cast of Center Stage's "The Threepenny Opera" ran through one of the musical's in-your-face finales during a recent rehearsal. The show opens with a public dress rehearsal on Sept. 27. (Photo by Megan Bachman)

In Center Stage’s most ambitious production yet, the revived theater company is putting on the epic 1920s Bertholt Brecht musical, The Threepenny Opera, with its celebrated songs by composer Kurt Weill, massive dance overtures and biting critique of capitalism.

Center Stage’s production of The Threepenny Opera opens for a two-weekend run on Friday, Sept. 27, with a performance at the John Bryan Community Center at 8 p.m. Show times then are 8 p.m. on Saturday, Sept. 28, and 2 p.m. on Sunday, Sept. 29. The show continues the following weekend, Oct. 4–6.

On Friday, Sept. 27, the play will be performed as a dress rehearsal open to the public, who are asked to bring a contribution to the Yellow Springs Food Pantry for that performance only. Tickets are $10 at the door for all other performances.

The Threepenny Opera is directed by Lorrie Sparrow and produced by Kay Reimers with musical direction by Sam Reich.

Not only is The Threepenny Opera the first musical for the revived Center Stage, it is a non-traditional musical at that. Billing The Threepenny Opera as an “opera for beggars,” German artists Brecht and Weill transformed traditional opera forms and created a new kind of musical theater. The audience will be familiar with many of the songs, including the popular “Mack the Knife,” which has been recorded by Louis Armstrong, Bobby Darin, Ella Fitzgerald and others, and “Pirate Jenny,” which has been covered by the likes of Nina Simone and Judy Collins.

The Threepenny Opera was first staged in Berlin in 1928 and was performed 10,000 times before 1933, when Brecht and Weill were forced out of Germany. The message is still as valid now as then, according to Sparrow.

“The message is — don’t feel sorry for those who don’t have,” she said. “Get mad and do something about it.”

Read the full story in the Sept. 19 edition of the News.