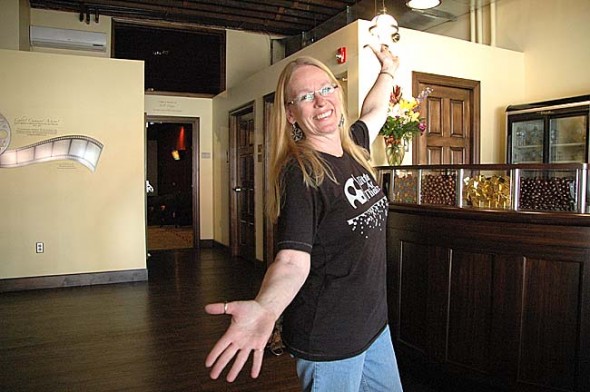 Little Art Theatre Executive Director Jenny Cowperthwaite welcomes theatergoers into the new lobby of the renovated theater, which will be open to the community during an open house from 3 to 9 p.m. on Saturday, Sept. 28. During the first complete renovation in the Little Art’s 84-year history, the theater was closed for the last five months and upgraded with a digital projector and surround-sound system, new cushioned seats, handicapped-accessible bathrooms and a spacious lobby, among other changes. After the open house, the theater begins a 12-day “Back to the Movies” film festival. Regular programming resumes on Friday, Oct. 11. (Photo by Megan Bachman)

This has been a “repair to remember” for the Little Art Theatre. Over the last five months, a half-million dollar renovation has transformed the 84-year-old theater from a relic of the 35-millimeter film era to a state-of-the-art, fully-digital and accessible movie house ready for the 21st century. And the best part is that the first complete renovation in the theater’s history was financed entirely by donations.

“People trusted us and we came through,” Little Art Executive Director Jenny Cowperthwaite said of the renovation, financed with a capital campaign that raised more than $475,000. The goal was to keep the charm of the old theater while making it more comfortable and up-to-date and Cowperthwaite, who has managed the theater for the last 35 years, believes they succeeded.

One step into the new Little Art lobby and you’ll have the feeling you’re not in Kansas anymore. A blend of new and old, the spacious lobby’s modern lighting and an elegant concession counter are juxtaposed with the exposed wooden rafters and original brick wall of the 19th century building for a look called “industrial chic.” Further inside, new bathrooms are spacious and handicapped accessible. But don’t look for “Men” and “Women” — these bathrooms are emblazoned “Harold” and “Maude.”

In the auditorium, soft leatherette seats with cup holders beckon, and since the seats are both staggered and inclined, viewing should now be optimal. A lounge area at the rear is perfect for post-movie conversation, while the digital projection and 12-speaker Dolby digital sound system promise a crystal clear picture with rich sound, projected on a clean new screen. Meanwhile, the iconic Art Deco house lights from the 1940s and the best-loved snacks like butter bars and popcorn with all the fixings keep the flame of the old Little Art alive.

To showcase the makeover, the Little Art will hold an open house and grand reopening from 3 to 9 p.m. Saturday, Sept. 28, with films, live music, free popcorn, face painting, concessions with wine and beer for sale, limited edition T-shirts commemorating the renovation and more. Short Street will be closed for food trucks and dancing in the street, with movie-themed music provided by DJ Juju from 5 to 9 p.m. Attendees are encouraged to dress as a favorite movie character.

On Sunday, Sept. 29, a 12-day film festival begins with the screening of a fresh digital print of the 1923 comic silent film Safety Last! starring Harold Lloyd, one of Cowperthwaite’s favorite films. The “Back to the Movies Festival” continues with a parade of fan favorites and new movies from over the summer, including the 1965 musical The Sound of Music (one of Little Art patrons’ favorite films according to a recent survey), Before Midnight (2013), The Kings of Summer (2013), Renoir (2012), Mud (2012), Much Ado About Nothing (2012), the documentary 20 Feet from Stardom (2013), the Japanese animated film From Up on Poppy Hill (2011) and The Way, Way Back (2013).

“The Miracle Off of Short Street,” the latest movie pun on the Little Art’s marquee, particularly rings true for Cowperthwaite. Five years ago, the future looked bleak for the struggling theater. Faced with an industry-mandated transition to digital and without any way of paying the $80,000 price tag for a new digital projector, the Little Art looked like it might be among the estimated 20 percent of theaters in North America that would not convert to digital and would probably close in the next few years.

Then in 2009, the theater became a non-profit and began raising the $50,000 it needed each year to cover its losses. An ambitious capital campaign was started last year to raise $475,000 for a complete renovation and digital conversion. Initial gifts from the Morgan Family Foundation ($250,000) and the Yellow Springs Community Foundation ($30,000) were crucial to the campaign, according to Kipra Heermann, the capital campaign committee chair. The rest was raised from a combination of individuals, foundations, businesses, board members and even the Little Art’s employees. A total of 475 people contributed, including some from as far away as Maine and many people who had never been to the Little Art. More than 17 gifts were in excess of $5,000.

“What we really want people to know is how incredibly grateful we were for people’s gifts,” Heermann said this week. “We were really blown away by how generous people were.”

Signs of the community support it took to complete the renovation are everywhere in the new theater. All 106 seats were “purchased” through donations. There’s also the Carol Cottom and Bruce Bradtmiller popcorn machine, Priscilla Janey-Pace screen, Adoption Link stage, Yellow Springs Community Foundation digital projector and more. The lobby is named after Malte von Matthiessen’s Australian grandfather O.P. Heggie, an early film star who appeared in The Count of Monte Christo (1934), Bride of Frankenstein (1935) and Midnight (1934), with Humphrey Bogart. The “Mojo Lounge,” a new seating area with tables and chairs at the rear of the theater, is named after board chair Maureen Lynch, who also was on the renovation committee.

And at a special unveiling of the newly renovated theater for donors last Saturday, Cowperthwaite was surprised to learn that the auditorium would be named in her honor. She was literally floored by the gesture, and broke down in tears. It was special for her to hear the “wows” and see the tears of the patrons who made the renovation possible.

“I got emotional,” Cowperthwaite said. “I really got the perspective of what it took to get here. It’s been a lot of stress to do this project. Now I know why we did it, seeing everyone’s gratitude.”

Other changes to the theater include a kegerator to serve draft beer from Yellow Springs Brewery and a warming drawer, with a potential pizza night in the theater’s future. There’s a new hearing assistance system for the hard-of-hearing. And a new historical plaque will be erected documenting the theater’s history, covering its opening in 1929 as “The Little Theatre,” its peaceful integration in 1942, the purchase of the theater by Antioch College in 1987 and Cowperthwaite’s long tenure.

In the next few weeks, Cowperthwaite will train her staff on how to project digital cinema packages instead of film prints, and the final health and building inspections are slated. Though the theater has taken a major step in securing its future, more moviegoers and space rentals will be needed to keep the theater afloat.

“We need more people attending the movies and we are hoping with these new comforts we will have them,” Heermann said.

The design was done by architecture firm LWC of Dayton and construction was completed by Carra Builders of Clayton. Local builder Tomaso Gregor served as the Little Art’s volunteer theater representative during construction and worked long and hard to ensure the project was successful, Heermann said.