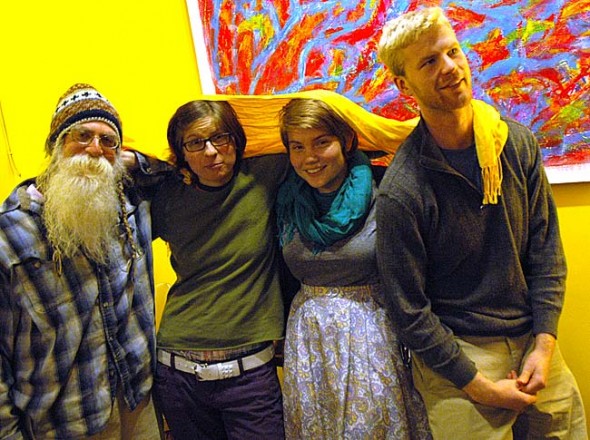 Four local poets, from left, Robert Paschell, Jenny Johnson, Abby Lybrook and Jack Whitacre, organized the Yellow Springs Community Poetry Jam, from 7 to 10 p.m. on Friday, Nov. 22. The poets, ranging in age from 19 to 65, will perform original work during a “free flowing evening” of poetry, music, improvisation and more. (Photo by Megan Bachman)

Street poets come inside to jam

“Instructions for Forgetting this Moment,” “Slaves to Freedom,” “Corpse Pose,” “The Cats Have Plunging Fire in their Veins,” “Brooklyn Bridge 6 Train” and “It is Difficult to Discipline the Sea.”

These are a few of the poems that you might hear if you stumble into the Yellow Springs Community Poetry Jam on Friday night, where four local street poets are moving their acts inside for a “free-flowing evening” of poetry, music, improvisation and more.

Expect everything from spoken word to song, free-verse to rhymes and the scripted to the spontaneous from veteran and emerging poets, or, the poets say, “old school and new school.” Audience participation is encouraged.

“It’s a jam because we’re all bringing our different ‘instruments,’ and inviting people to get down,” said Jack Whitacre, one of the poets. “I don’t know what’s going to happen.”

Who are these intrepid troubadours who say they are out to blow minds, heal society, channel emotion, and inspire invincibility with their words? They are a 1960s-era Antioch College radical, a recent college grad now peacekeeping research assistant, a 20-something nutritional healer, and an Antioch student.

Chances are you’ve seen a few on the street. Robert Paschell, for one, has been tickling brains for more than 20 years with pun-based humor he sells on T-shirts and tote bags along Xenia Avenue. The 65-year-old also gives live poetry performances, offering passers-by a poem from a “playlist” of titles of nearly 100 original poems that Paschell has memorized and can recite at will. At the Poetry Jam, Paschell will let the audience choose from such poems as ”Hush … Dream Pancakes are Cooking,” and “Don’t Try This at Home, Christopher Columbus.”

Paschell, who came from Washington D.C. to the village in 1966 to attend Antioch, is like Rumi in his masterful wordplay and Johnny Appleseed in his propensity to propagate poetry, he says. Whitacre calls him a “modern day Basho” as, like the 17th century Japanese haiku master, he has dedicated his life to the craft of poetry.

“Live performance is something for me that is vital for life,” said Paschell, who is known to be gregarious and silly on the street with his customers. As someone once told him — “It’s the sizzle that sells the steak,” he said.

Whitacre is a 23-year-old poet who has been standing out at local poetry events with rhymes influenced by rap music. Whitacre, a Maine native who studied poetry at Kenyon College, said he blends the style of the 13th century Sufi poet Rumi with 21st century rappers. Whitacre has even opened for the rapper Big Boi from OutKast, and at the Poetry Jam, in addition to his poems, he plans to do freestyles to instrumentals by 9th Wonder, J Dilla and MF Doom.

“My favorite poet is Rumi and I mix that with Jay-Z and Kanye West,” Whitacre said. “It’s all about the rhymes.”

Whitacre, along with fellow poet Jenny Johnson, has taken up residence on the Senior Center stoop on weekends dropping songs and spoken word pieces in free performances that have evolved into loud, wild free-styling. They are proud that a recent Street Fair the local police even asked them to keep it down.

Together, Whitacre and Johnson are the improvisational band “Fierce,” but Johnson is a poet in her own right. Johnson, who goes by the handle “Juniper Tree,” is a 25-year-old aspiring nutritional healer from Michigan who came to Antioch as a member of the college’s final freshman class before it closed. She now works at Starflower Natural Foods. Johnson’s poetry evolved from journaling and explores themes of self-growth, healing and social change. Her music is inspired by drum circles and a local women’s group which helped her see that music is inherently spiritual and that you can’t hit a wrong note.

“Whatever comes out is supposed to come out,” she said.

Johnson said she uses improvisation to break through confidence blocks, while she takes notes from the punk rock ideal that there is no separation between performer and listener in promoting audience interaction. Performance helps her be herself, she added.

“With the music and the poetry I want to put myself in the world — I want to be shining,” Johnson said.

Nineteen-year-old Abby Lybrook, a second-year Antioch student, rounds out the poetry jam. Instead of the street, Lybrook spends more time on campus reciting original poems at open mic sessions, or spontaneously recording spoken-word pieces in echoey dorm stairwells with fellow students, but she has been seen downtown dancing to the likes of “Fierce.” Lybrook, of Dayton, takes cues from the father of free verse, Walt Whitman, and Beat poet Allan Ginsberg. Lybrook writes poems compulsively — “I have to write it down or I can’t continue with my day,” she said — mostly free-verse stream-of-consciousness pieces probing the lives of those around her.

“I like to write about the different aspects of people, how they interact with each other and society,” Lybrook said. “”Really I write about anybody that I see. The mundane can be so interesting, so fascinating.”

The Poetry Jam is, in a way, a re-creation of a 1960s-era poetry be-in or “happening,” the poets said, and is hopefully the first of many. In addition to performances by the four poets and live music from “Fierce,” Paschell will perform a psychedelic light show featuring slides of colorful and nature-themed artwork from the 1960s. According to Whitacre, each poet brings something unique to the jam.

“Abby gets down to the raw, the real, the history,” Whitacre said. “Robert goes ‘ape’ — he can lose it. Jenny has so much heart. What people will find if they come is an unparalleled level of realness … and one person who likes hip hop.”

Each poet also has high aspirations for their poetry. Lybrook hopes her poems give the audience “a difference perspective, a new way of looking at things” and [help them] see connections they hadn’t before. Johnson is interested, she said, in “creating cultures where we can say what we really want. … I focus on liberating myself and others and society.”

Added Paschell: “The purpose of all art —poetry being the one feather on the one wardrobe — is to tell stories. We tell a story, channeling emotions into another medium, whether it’s a piece of marble, a dance, or a poem.”

Whitacre aims with his performances to make himself and others feel a rush.

“I bare my teeth and try to make myself and others feel invincible,” Whitacre said. “When you’re feeling it right, it’s no mind, just flow and it’s so intoxicating.”