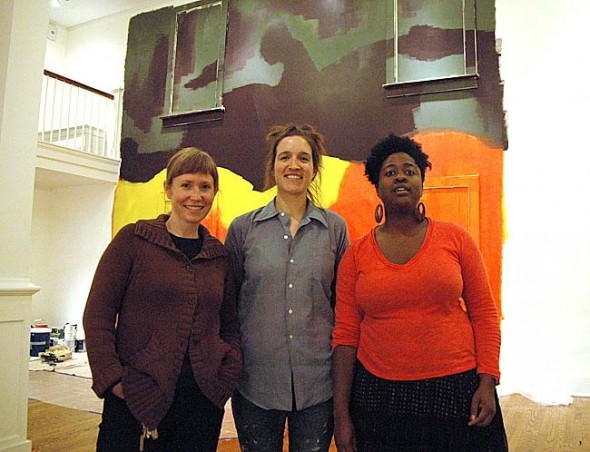 Antioch art faculty members, from left, Sara Black, Raewyn Martyn and Gabrielle Civil are among those exhibiting in a new show at the Herndon Gallery of the work of Antioch faculty and resident scholars. It opens Thursday, Dec. 12. (Photo by Megan Bachman)

Antioch’s art faculty and resident scholars are now erecting an edgy show in the Herndon Gallery that pushes the boundaries of their disciplines.

The exhibit, running now through Feb. 14, is called Currencies, and in addition to being current work, reflects an experiential theme coursing through the work of the Antioch art faculty.

An opening reception for the exhibit is 7 to 9:30 p.m. on Thursday, Dec. 12., on Jan. 23 is “The Arts Presents,” an evening of presentations by the exhibitors on their arts practice, and a closing reception will be on Feb. 14.

Black will disassemble and reconstruct her sculpture through the duration of the exhibit in an exploration of the hidden places of the human mind and the gap between the conscious and unconscious. The scaffolding is literally part of the sculpture, and Black will work during gallery hours, in full view of visitors.

“The live performance of building is really important to me, it’s a kind of choreography as every gesture is deliberate,” Black said.

Raewyn Martyn, a visiting assistant professor of visual arts, is creating a floor-to-ceiling abstract painting will reconfigure itself as Martyn peels back layers of paint throughout the course of the exhibit to create dissonance for the viewer.

“Where it goes from a two-dimensional surface to three dimensional, it is somewhere between and image and an object, and that’s an important part of people’s experience,” Martyn said

New Associate Professor of Performance Gabrielle Civil’s installation, “Kinds of Performing Objects I’ve Been,” uses photography, paintings and keepsakes and live interaction to document some of the more than 40 original performance artworks she has created around the world in the last 13 years. 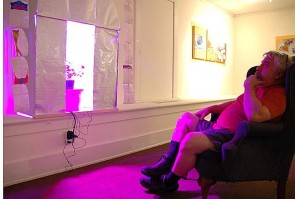 Michael Casselli, Antioch’s instructor of media arts, is erecting an installation as a reflection on caring for his mother Ruth as she was dying of lung cancer in 1996 and is titled, “wishing we had talked, there’s so much left unsaid.”

Others showing at the exhibit are Charles Fairbanks, an assistant professor of media, who is showing two short films, The Men and Wrestling With My FatherDennie Eagleson, the Herndon Gallery executive director, who will present a series of abstract photographs made from outdated Polaroid film of the bees she cares for on her land, Nevin Mercede, a former professor of painting and printmaking will show two triptychs from a series titled “Ovation,” which explores the interpretation of gestures. Additional events associated with the exhibition will showcase performances by Jill Becker, former dance professor and Louise Smith, a former theater professor and current dean of community life.

For the full story, read the Dec. 12 issue of the News.