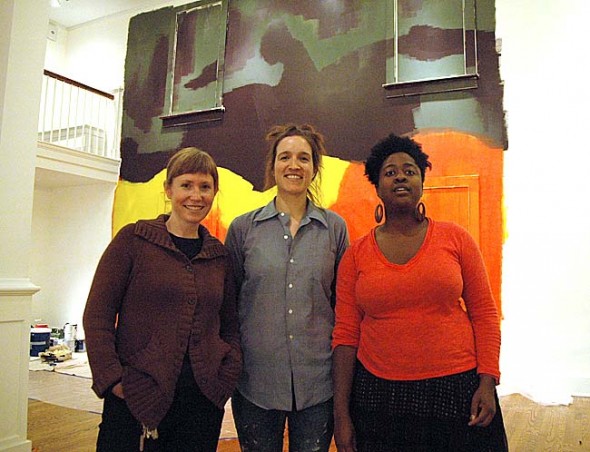 Antioch College’s art faculty members and resident scholars are exhibiting in “Currencies,” a new Herndon Gallery show running from Dec. 12–Feb. 14, with an opening reception from 7 to 9:30 p.m, Thursday, Dec. 12. From left are faculty members Sara Black, a sculptor, Raewyn Martyn, a painter, and Gabrielle Civil, a performance artist, in front of Martyn’s painting, portions of which will be peeled away to reveal new images during the course of the exhibit. (Photo by Megan Bachman)

A current of artistic energy is circulating on the Antioch College campus these days with spontaneous artwork from students and experimental art from faculty and resident scholars.

Students took over the Herndon Gallery recently for a one-night guerilla art show and are now passing around the student body a single piece of art to be constantly reinterpreted much like the childhood game of Telephone.

Meanwhile, art faculty and resident scholars are erecting an edgy show in the Herndon Gallery that pushes the boundaries of their disciplines while it engages the audience in the present.

The exhibit, running now through Feb. 14, is called “Currencies,” and in addition to being current work, reflects an experiential theme coursing through the work of the Antioch art faculty.

“It’s very experiential work and we’re at a very experiential college,” explained Sara Black, assistant professor of visual arts and the first member of Antioch’s new art department. “We’re taking what would be considered static forms and pushing them into motion….It’s all time-based.”

For example, Black will disassemble and reconstruct her sculpture through the duration of the exhibit in an exploration of the hidden places of the human mind and the gap between the conscious and unconscious. The scaffolding is literally part of the sculpture, called “Reconstructing the Fold,” and Black will work on it during gallery hours in full view of visitors.

“The live performance of building is really important to me, it’s a kind of choreography as every gesture is deliberate,” Black said.

Raewyn Martyn, a visiting assistant professor of visual arts, is pushing her work into time as well. Her floor-to-ceiling abstract painting will reconfigure itself as Martyn peels back layers of paint throughout the course of the exhibit to create dissonance for the viewer.

“Where it goes from a two-dimensional surface to three dimensional, it is somewhere between an image and an object, and that’s an important part of people’s experience,” Martyn said.

An opening reception for the exhibit is 7 to 9:30 p.m. on Thursday, Dec. 12. On Jan. 23 is “The Arts Presents,” an evening of presentations by the exhibitors on their arts practice, and a closing reception will be on Feb. 14.

As Antioch’s art faculty grew from one lone instructor to five in the last two years and the student body burgeoned to more than 200, an artistic vitality returned to campus, according to Herndon Gallery Creative Director Dennie Eagleson, who is also exhibiting new work. To Martyn, who was hired this fall, the Antioch community is still small enough for ideas and energy to spread quickly, while it is finally large enough for art to erupt naturally.

“It’s a critical mass in terms of community and as soon as you have a community of that size, art emerges,” Martyn said.

In her first college teaching position, Martyn, a former a high school art teacher in New Zealand, is excited about her students’ enthusiasm for art. She finds that the students she teaches in her painting and drawing classes are willing to take risks and are making political statements that are both subtle and complex.

New Associate Professor of Performance Gabrielle Civil is also impressed with her students, to whom she teaches performance and storytelling. Civil, originally from Detroit, Mich., said that Antioch students often arrive with a lot of talent and experience in music and theater and are interested in “self-actualization” by producing their own material, which Civil accommodates by teaching performance in a “more generative instead of interpretative way,” she said.

Civil’s installation, “Kinds of Performing Objects I’ve Been,” uses photography, paintings and keepsakes and live interaction to document some of the more than 40 original performance artworks she has created around the world in the last 13 years. As part of the exhibit, at 7 p.m. on Thursday, Jan. 9, she will perform “Aide-Mémoire,” a new performance artwork that premiered in Zimbabwe last month.

Civil originally studied poetry, but felt that it was too rote and began exploring “how language moves,” ending up as a performance artist with a unique approach that is not theater or acting, but “creating an embodied artwork in space and time,” she said. Civil feels strongly that Antioch’s art faculty members demonstrate to students that they are working artists themselves. It’s a group Civil said she is honored to be a part of.

“We’re pretty awesome in the sense that we are interesting thinkers and makers, we’re fairly dynamic, interested in social questions and interested in working in multiple forms or playing with them,” Civil said. “We’re willing to make bold statements and try things, so it’s not a very staid group at all.”

As an example, Michael Casselli, Antioch’s instructor of media arts, is breaking from his typically abstract and conceptual installations in creating an emotionally-intense piece for the show. His installation is a reflection on caring for his mother as she was dying of lung cancer in 1996 at age 57 and is titled, “wishing we had talked, there’s so much left unsaid.” A loop of audio of Casselli talking to his mother will play, with his mother represented by a pot of miniature roses under a grow light and an empty armchair representing Casselli. Throughout the exhibit Casselli will continue to make and upload new recordings, and he will sometimes speak and read from the chair in person.

For Casselli, the installation is a tribute to his mother and an exploration of his conflicted feelings for her, which he did not express during her final days because of their somewhat strained relationship.

“It’s about how we can be more genuine with each other and embrace conflict,” Casselli said. “If you don’t deal with it, it will fester, and you will miss an opportunity.”

Charles Fairbanks, an assistant professor of media arts who was the second member of the arts faculty, will show two short films, The Men and Wrestling with my Father in a specially-built screening room in the gallery, along with photographs titled “Do you know the cause of your problems and suffering?” that he shot in rural Chiapas, Mexico.

Several former Antioch instructors, some of whom are now resident scholars, are also showing in the exhibit. This includes the gallery’s creative director Eagleson, a former Antioch photography professor, who will present a series of abstract photographs made from outdated Polaroid film of the bees she cares for on her land, along with a video she shot of the bees. Nevin Mercede, a former professor of painting and printmaking will show two triptychs from a series titled “Ovation,” which explores the interpretation of gestures. And additional events associated with the exhibition will showcase performances by Jill Becker, former dance professor and Louise Smith, a former theater professor and current dean of community life.

Black said the participation of former Antioch arts faculty reveals an artistic thread connecting the previous and the current incarnations of Antioch.

“They are foundational for our arts community,” Black said of the former faculty. “There is this intergenerational thing … along with the same thread that there is an invitation for participation by the viewer.”