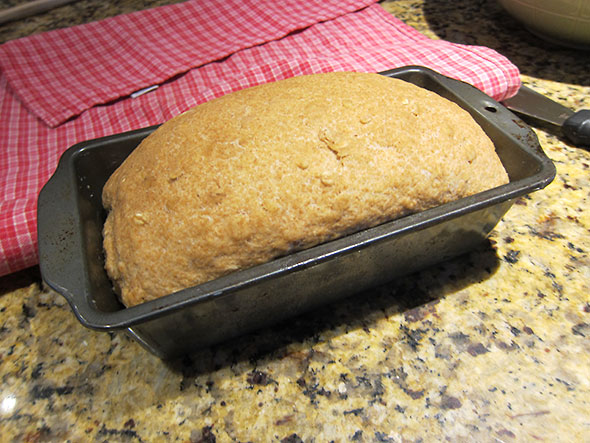 It started on Sunday with a missed text from my husband. “We need bread please.” I had stayed at church to practice for the Christmas cantata while Jeremy took the children home to fix them lunch. He’s been making a lot of cinnamon toast and peanut butter sandwiches for the kids lately and felt his store of Italian bread waning. I came home with company but no canapé but I thought “No matter. I’ll make bread.” While Jeremy portioned out Turkey Tetrazzini to our guests, I opened Peter Reinhart’s “Artisan Breads Every Day” and searched out a recipe for sandwich bread.

I discovered one—Everyday 100% Whole Wheat Sandwich Bread—on page 83. I like Mr Reihart’s book because it offers clear instruction and clever variations in succinct notes. I decide to take his first suggestion on the whole wheat bread recipe and replace a small amount of whole wheat flour with whole oatmeal.

Paul Reinhart’s recipes are also graciously robust. We can bake bread step by step in our own time. The sandwich bread recipe requires a small initial investment of attention so I got the ball rolling and combined ingredients while we visited with our people at the kitchen peninsula. Preparing bread dough is one of those forgiving tasks that allow for inattention. Once the dough takes shape, it benefits from periods of rest. While I relax, the glutens in the dough are actively working to create the strong network of strands that will give bread its texture. When I pick up the dough again and stretch and fold it along several paths, I add strength and length to those stands. Once the dough transitioned from sticky to tacky, I placed it in a covered bowl and tucked it into the refrigerator to ferment over two nights. 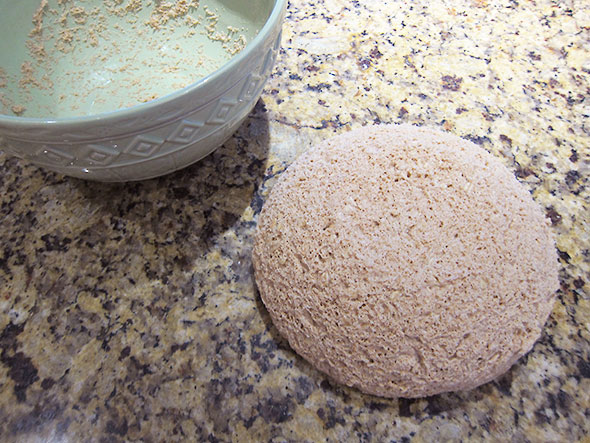 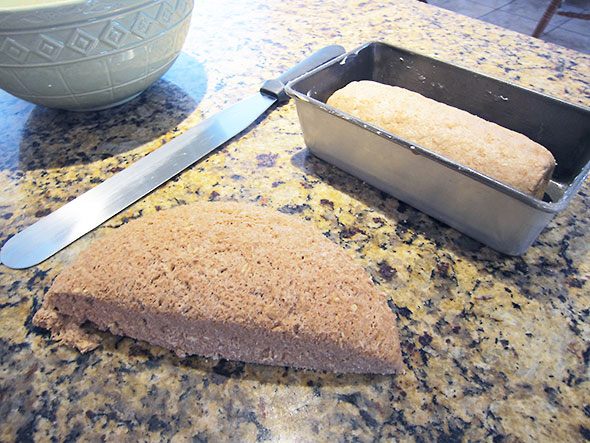 The morning I removed the dough to bake it was Tuesday, the day when an unexpected snow storm cancelled school and my morning work hours. I tipped over my bowl on the counter and let the fermented dough release itself. Dividing the dough into two sections, I set about shaping two loaves. As illustrated in Paul Reinhart’s book, there are different ways to prepare a bread dough depending on its final form. Before consulting Mr Reinhart’s book, I had never thought much about the architecture of a loaf of sandwich bread, but indeed there is a consistent swirl to its structure. This structure can be achieved by folding the dough first into a 8 inch by 5 inch rectangle and then rolling up the rectangle along its 8 inch axis to form a 5 inch long cylinder. Dotting the countertop with a small amount of oil, I rocked each cylinder a few more times to even out its shape and to press close the seam. 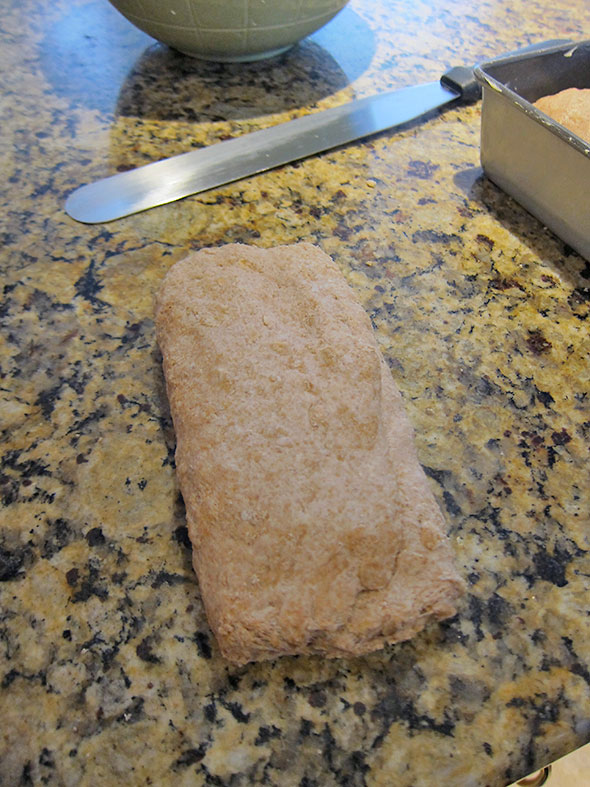 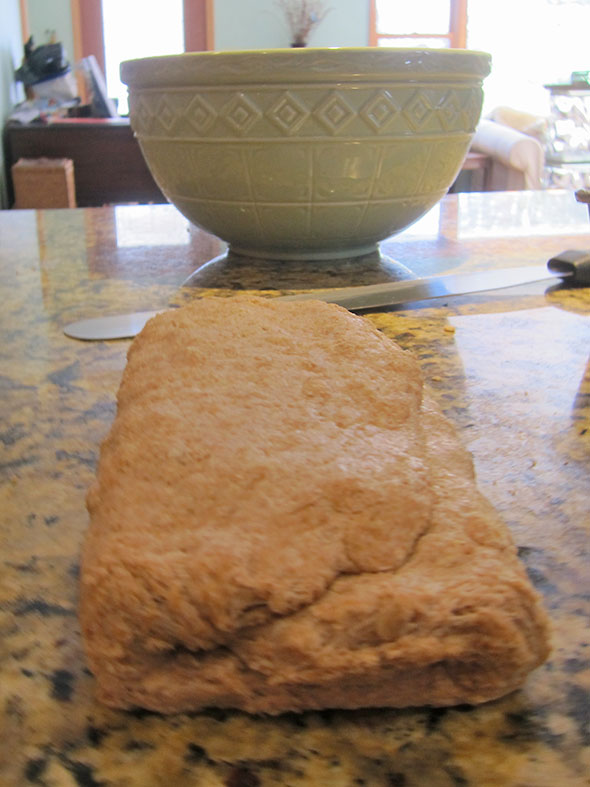 Practice makes perfect, and the second dough cylinder that I formed was more voluptuous than the first. Compared to the first loaf, I worried less about filling the 8 1/2 inch by 4 1/2 inch bread pan and refrained from pressing the dough down into the pan. This restraint help form produce a well formed loaf with a high domed top. 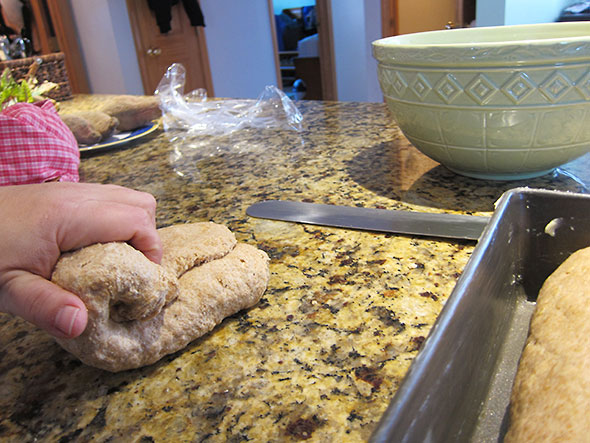 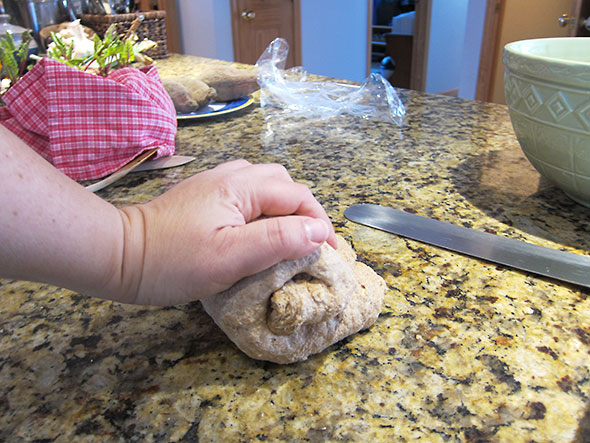 Now I could again leave the shaped loaves to rise. We left the house to enjoy the sunny snow day and returned several hours later. It was good to know that according to the recipe we were under no specific time constraints. We could return in two hours or eight for the yeast to prove its stuff. 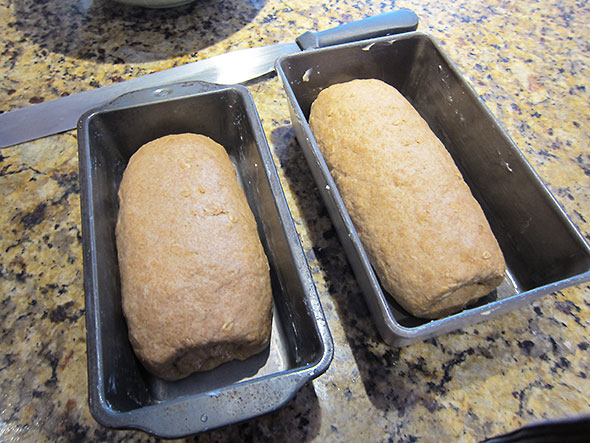 We returned five hours later. My husband gave himself the task of clearing the snow from our driveway and laying down some salt so that the next morning we could walk to the bus without hazard. Inside I lit the oven and let the warm stove lend its glow to the room. I baked each loaf for 40 minutes turning the loaves as instructed half way through. The baked bread sprung free from their pans without effort and I tapped the golden brown crust on the bottom to hear the hollow thud of an evenly cooked loaf. I check the interior temperature to test aside Mr Reinhart’s prescription and measured a reassuring 185 degrees. 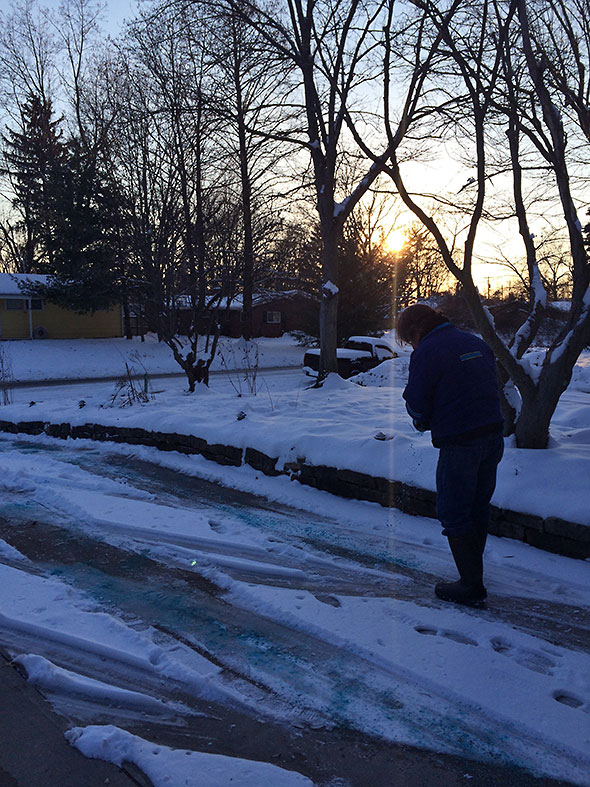 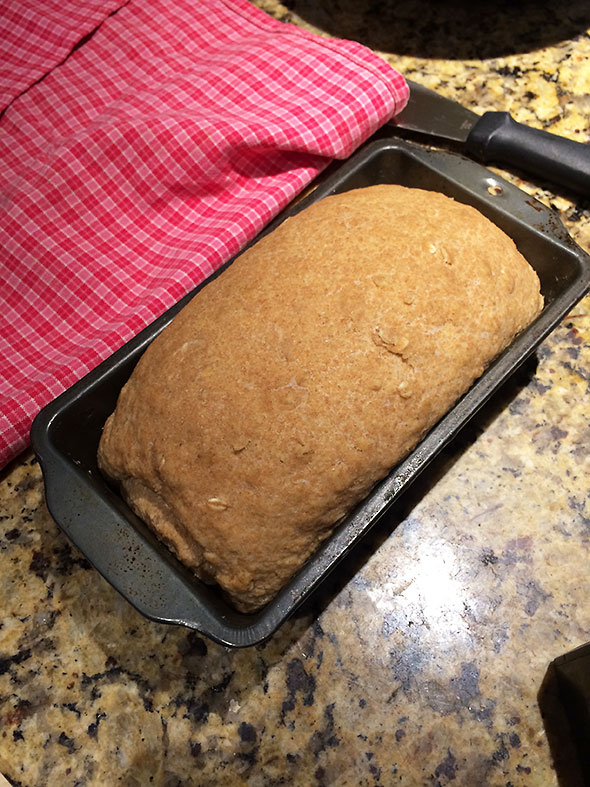 My daughter almost wild with the enveloping aroma of fresh bread insisted that we start dinner with bread and jam. Her plan was excellent, and we did not resist long. 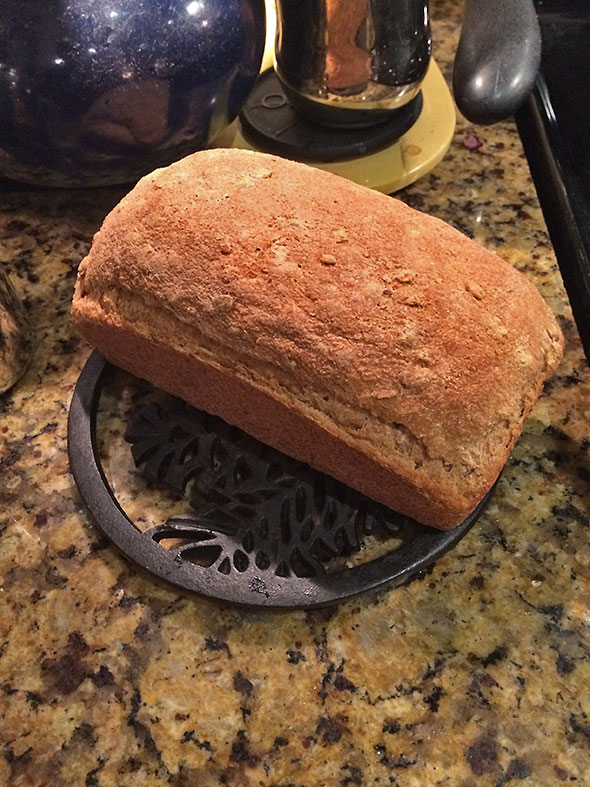 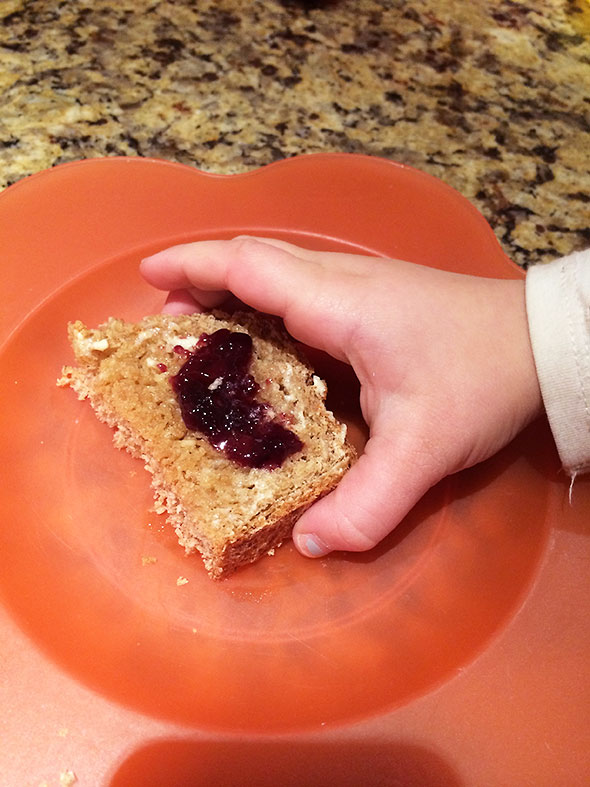 With fanfare and pomp, we sliced into the first loaf and revealed proof of a well-tested resilient process: the wonderful texture and flavor of a homemade whole wheat bread.