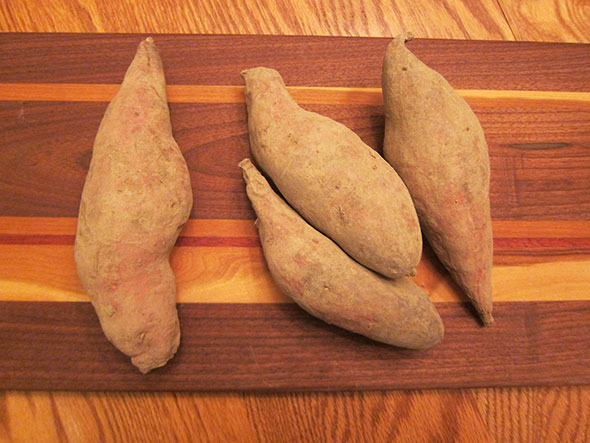 A decided plus of cooking in the internet age is the ready access to videos. With a couple of clicks, I can bring experts and inspired peers into my kitchen. I stand their apprentice as they demonstrate mastered techniques and brave new concoctions. The holiday months of November and December provide a special boon of these videos. In the lead up to Thanksgiving—our national embrace of home cooking—I particularly enjoyed Saveur Magazine’s series on basic kitchen tasks and the New York Times postings on the essential Thanksgiving.

The day after Thanksgiving, I watched a video in which a rather bemused Mark Bittman cooked with Chef Wylie Dufresne. Chef Dufresne is known for cooking as a molecular chemistist, so Mr Bittman was hoping for a high concept dish. That he was disappointed by the ordinary fare and humble presentation—turkey hash—was obvious though understandable. Mr Bittman went with it anyway, and I’m glad he did. There were subtleties to how Chef Dufresne works. In particular, there’s the moment where he gently drops eggs into a hot pan off the stove. The shot reveals a careful attention to the tender state and blossoming transformation of his ingredients. I watched the video a second time, and then a third.

Now, if there is one food that I cannot warm up to, it’s hash. So please banish any thought that I am going to proceed at this point and cook hash for my family. The grainy texture and taste of potato, onion, and ham thrown together in tiny cut cubes was a childhood horror for me, and even still I shudder thinking of it. Substituting turkey provides no balm. I do like a good breakfast potato dish however; and so, after watching Chef Dufresne’s video that third time, I asked my mother if she had any potatoes and onions. The answer was one onion and one sweet potato. As far as I was concerned, that answer was the perfect. 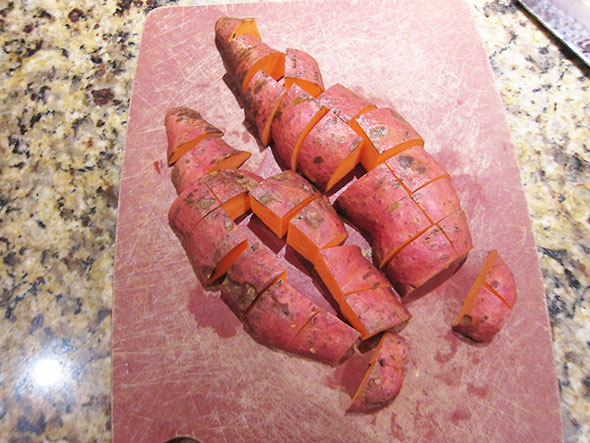 I diced the sweet potato into as evenly cubed pieces as I could manage…it was a dense root…and preceded with the onion. 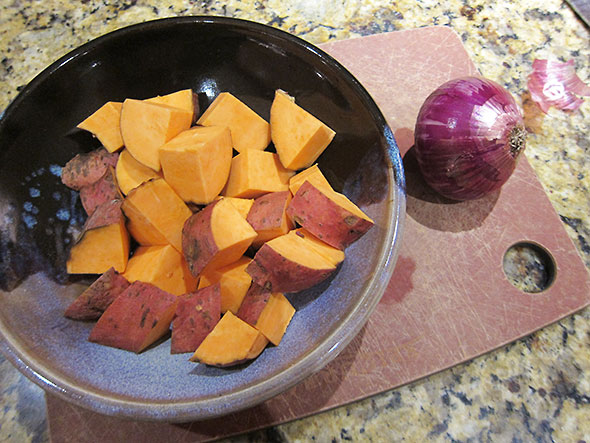 The onion I diced according to the Saveur Magazine video. 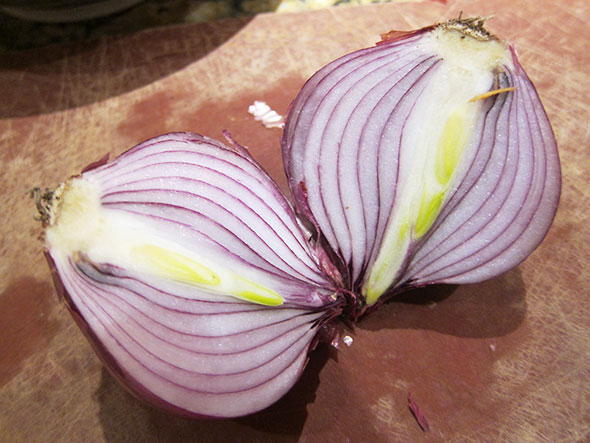 First, I halved the bulb through its root. 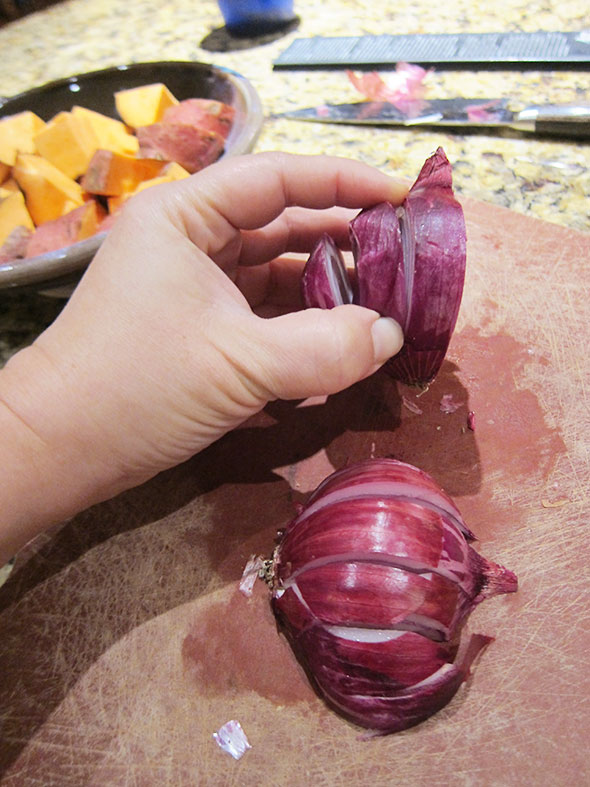 Next, turning the knife blade parallel to the cutting surface, I made three horizontal slices toward the root but not all the way through. The root keeps the onion together so I could easily turn the onion and, pointing the blade vertically and the tip of the knife toward the root, I made four vertical slices down. With one final turn of the onion, I made the final slices cutting crosswise to section the bulb into dice-sized pieces. This technique works because the root stabilizes the onion so that the diced pieces come out uniform.

Next, I turn from Saveur’s basic guidance to follow Chef Dufresne’s lead. Sautéing the onions on the stove, I bathed them in a bit of grape juice to steam and soften them. After the grape juice reduced, I added the chopped sweet potato and cooked the medley to a caramelized state and then dosed all with a spritz of sherry enjoying the same vigorous shake that Dufresne gave the bottle, his thumb controlling the sputtering flow. 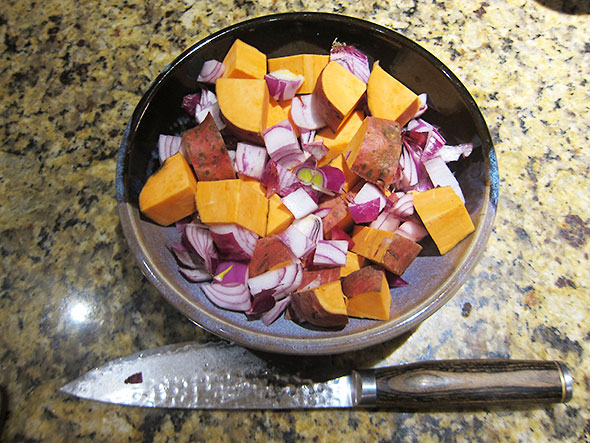 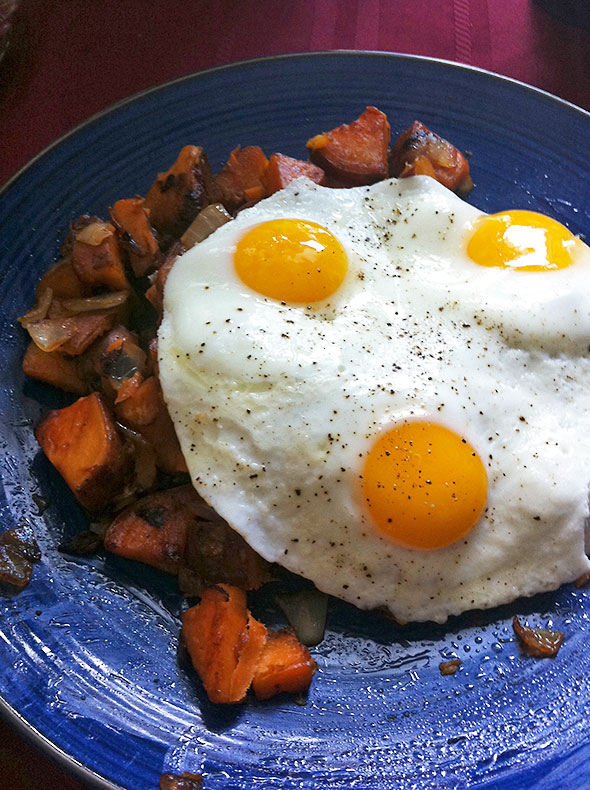 To baste the eggs, heat a pan to medium heat. The pan is ready when the butter bubbles gently when added. Remove the buttered pan from the heat and drop the eggs onto the pan. Salt and pepper to taste. Cover the egg pan to baste the eggs and return to a medium low heat. When the egg white loses its transparency and the yolk losses its jiggle, serve the eggs over the browned sweet potatoes. 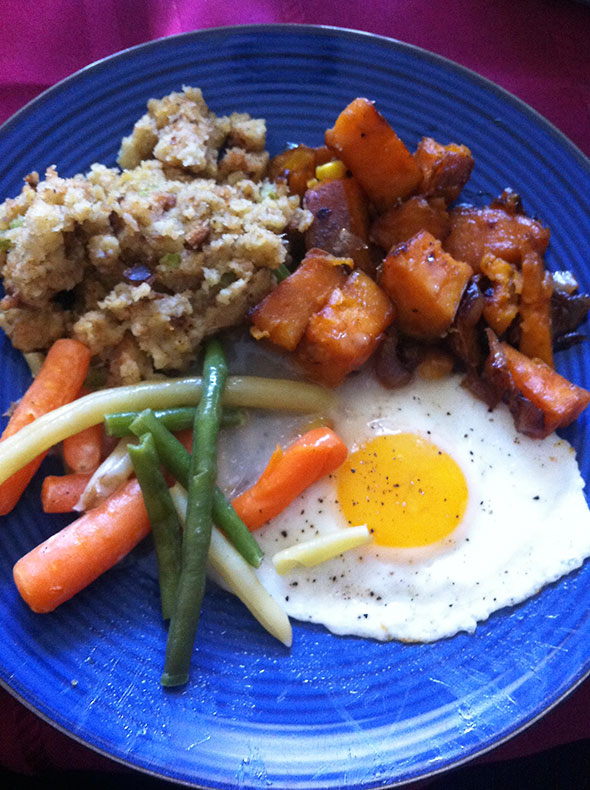 When I cooked the eggs sunny side up, again I mimicked as best is my ability the care Chef Dufresne had taken. I removed the preheated pan from the direct heat and slipped the yolk and white from their cradling shell to the warm embracing metal. I let the eggs set slightly before returning the pan to the heat. I was rewarded with a silky texture to the whites’ underside when I flipped the eggs off the pan. I did cheat a little in the cooking. To even the heat transfer to the whites, I covered the eggs and basted them.

When I made this dish for a late morning brunch with the family, we paired it with leftovers from the Thanksgiving meal: stuffing, cranberry sauce, green beans, and even turkey gravy.

I wouldn’t dream of adding a meat to this dish. That would make a hash of it, and God forbid. I would though add sliced mushrooms—a very welcome addition indeed. So lights, camera, action. Put your own sweet potato brown into motion for a satisfying side on a snowy day.