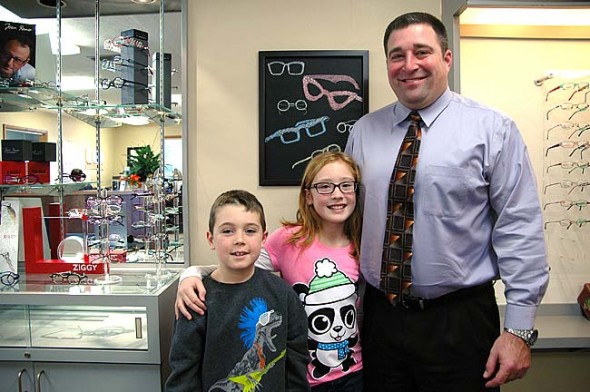 Optometrist Todd McManus, pictured above with his children, Gavin, 7, and Haley, 10, recently opened a new office at the south end of Yellow Springs. He also practices in Xenia with a satellite office in Enon. (Photo by Carol Simmons)

An optometrist with an eye for the bigger picture

“Basically I look at what I do as a problem solver,” said Dr. Todd McManus, a doctor of optometry who recently opened a new office in Yellow Springs.

With an established practice in Xenia and a satellite office in Enon, Dr. McManus hung his shingle here in mid-November after observing that the village was without a local eye doctor for the first time in decades.

He says he might originally have set up shop in Yellow Springs when he and his wife, Kim, chose to come to the area after getting his license in 2001, but “there was always an optometrist — or two” here. When he learned this fall that the practice most recently known as Greene County Eye Care was moving out of town, he saw a void. He says he is excited about the opportunity to establish a presence in the village where he and his family — which now includes Haley, 10, and Gavin, 7 — have friends and enjoy the outdoor activities and local culture.

To move into the vacant professional building at 1496 Southgate Ave., however, he had to start practically from scratch — buying new equipment, ordering a new stock of eyewear frames, building a new patient base. He also hired a new employee to join two others in the local office who were already on his staff.

“An optometrist is kind of a gatekeeper,” Dr. McManus said, noting that many people don’t visit their primary care physician as regularly as their eye doctor. As such, he is in the position to note the possibility of certain related health conditions — diabetes, high blood pressure, high cholesterol — that may go unobserved otherwise. “Not that I diagnose,” he said, but he does make recommendations to see a medical doctor if he suspects a problem. “I was trained very much in the medical aspect” of eye care, he said.

A native of Lancaster, Ohio, McManus studied biology at Carnegie Mellon University, in Pittsburgh, where he also played football. He continued his education at the Illinois College of Optometry in Chicago, and completed his “internships and externships” at hospitals and VAs in the Chicago area. When it was time to go into practice, he and his wife — whom he met while getting his doctor of optometry degree — decided that the city didn’t offer the kind of life in which they wanted to raise a family. They turned to his home state for that, finding a practice in Xenia that had promise. They settled in Xenia Township between Yellow Springs and the county seat, and began putting down roots.

“I wanted a smaller community, a community where I could become involved,” he says. That he has done. His various roles and affiliations include president of the Greene County Board of Developmental Disabilities, incoming vice president of the Xenia Chamber of Commerce, and membership in the Yellow Springs Chamber and the Xenia Rotary, in addition to coaching his children’s multiple sports teams.

* Carol Simmons is a freelance writer for the News.