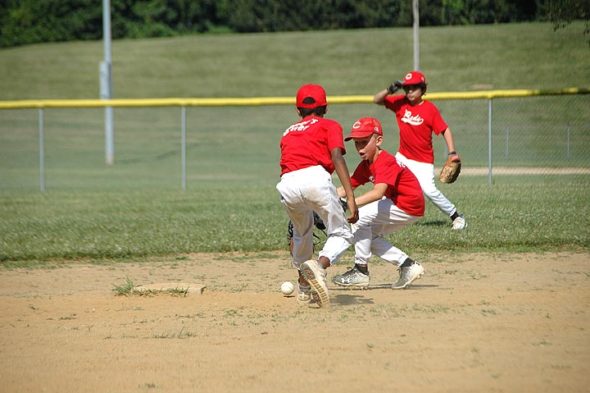 The Adoption Link Braves wrapped up the 2018 Major League Championship by splitting the season’s final two games last week with the Sunrise Café Indians. The Braves dominated in their first meeting of the week with a 14–3 victory on July 9. DéAndre Cowen led the team with a single, double and a triple, three runs scored and an RBI, while Shawn VanHoose also went 3–3 with one run and an RBI. Colin Linderman’s pair of base hits resulted in two runs and an RBI and Krishan Miller scored once after a pair of base hits and three stolen bases. Lily Rainey, Sophie Lawson and Jack Horvath scored the Indians’ three runs.

The Indians rebounded in the season finale on July 12, taking a 10–7 decision over the Braves. Kian Rainey, Luka Sage-Frabotta and Sophie Lawson all scored a pair of runs thanks in part to their aggressiveness on the bases, collectively stealing a dozen bases. Jake Ortiz-Thornton, Lucas Dunn, Lily Rainey and Jacob Felton accounted for one run each and stole another 12 bases between them. From the mound, Dunn struck out six of the first nine batters to help hold the Braves scoreless through the first three innings. The Indians scored all ten runs in the first four innings, which still left them up by three, despite DéAndre Cowen’s attempt to rally the Braves with a fifth inning, two-run homer.

Meanwhile the Minor League Tom’s Market Pirates found themselves clinging to just a one game lead over the Nipper’s Corner Reds heading into the season’s final week. The Pirates dropped their first game of the week when they lost 27–13 to the Sam and Eddie’s Open Books Braves on July 9. The Braves took and never gave up an early lead, smashing 37 hits and scoring the maximum allowed six runs in three of the first four innings. Every Braves player had at least two hits, with Teddy Horvath, Morty Levinson, and  Owen and Lucas Price all going 4–4 at the plate and knocking in a combined nine runs. Lili and Logan Herzog combined for a total of eight RBIs off six hits, while Henry Babb’s third inning lead-off home run to right field put the Braves up by 10. Bryce Fleming, Tavey Johnson and Adeline Zinger led the Pirates effort, all going 3–3 with three RBIs from Fleming and Zinger and a pair by Johnson. Rookie Nylaiyah Miley knocked in a pair of runs and scored once off a pair of base hits.

The Pirates rebounded by the weekend, winning their second game of the week over the Peach’s Dodgers, 17–12 on July 14. Bats for both teams were hot, with the Pirates hammering out 22 hits while the Dodgers had 24. Tavey Johnson led the Pirates by driving in five runs off three hits and crossing the plate three times, including a fourth-inning home run. That came after Zinger’s first inning three-run home run. The Dodgers kept it close through the first three innings, before the Pirates scored six in the fourth. The Dodgers rallied with four runs in the last inning but couldn’t narrow the gap. Javin Obringer led the Dodgers with a 4–4 day and four RBIs, followed by Ezra Lydy and Lucas Mikesell who also went 4–4 for the Dodgers.

Meanwhile the Reds moved up after winning two of three games last week. Their only loss was the Dodgers first win, a 14–11 decision on July 11. The Dodgers took the lead for good with a six-run second inning to go up 7–4. They failed to score in the third while holding the Reds to a single run in the frame. The Dodgers added three more in the fourth and crossed the plate four times in the final inning, when the Reds mounted a six-run rally that fell short. Emil Lazar, Ezra Lydy, Malini Miller and Ben Morris all had a stellar 4–4 day at the plate, with Morris knocking in five runs. Mikesell and Tomé Rios also each accounted for a pair of RBIs. The Reds’ Noelle Fisher and Brendyn Slone both went 3–3 at the plate and knocked in two runs each, while Neirin Barker’s fifth-inning three-run homer was part of the Reds final inning rally. Matt Drummond, Aiden Gustafson and brothers Sameer and Nico Sajabi all went 2–3 resulting in four combined RBIs.

The Reds bounced back with a 16–2 blowout of the Braves on July 12. The Reds racked up 24 hits in the game. Brendyn Slone led the way with three hits in as many at bats and four RBIs, while Sameer Sajabi knocked in three runs off his 3–3 day. Henry Babb and Jaida Jones paced the Braves with a pair of hits each in their two plate appearances with the team’s two runs being knocked in by Jones and Olivia Hasek.

The same two teams met again in the first game on July 14 when the Reds came from behind with a strong final two innings to seal a 13–11 win over the Braves. The Reds trailed 7–3 after three innings but rallied for a six-run fourth that saw eight base hits. The Reds added four more runs in the fifth and held the Braves to just one in the fourth and three in the final frame. Henry Lake of the Reds led his team with a 4–4 day at the plate, four RBIs and two runs, while Sameer Sajabi knocked in a pair off his four hits and scored twice. For the Braves, Lucas Price knocked in three RBIs and scored twice off a pair of doubles while Naima Jones’ pair of base hits resulted in two RBIs.

In their fourth and final game of the week on July 15, the Braves cut loose with an amazing 37 hits in a 28–20 win over the Dodgers. The Braves jumped out to an early lead and scored at least five runs in every inning. Going into their last at-bat, the Dodgers were down 28–9 and rallied for 11 runs, driven in by Obringer, Morris, Lazar, Charlie Carr and Miller. Obringer’s six RBIs and three runs off four hits was tops for the Dodgers, followed by Miller’s four RBIs off three hits and two runs.  Mikesell scored four runs after his four hits. Horvath led the Braves effort, with a pair of doubles and a three-run home run, resulting in six RBIs. Lucas Price also doubled twice and knocked a three-run homer in the fifth for a total of five RBIs.