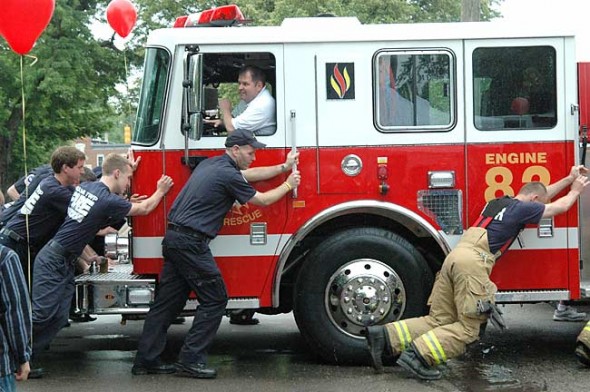 At Tuesday's open house, Miami Township firefighters carried on the tradition of pushing the new firetruck into its bay at the station. Assistant Chief Denny Powell drove the truck.

Miami Township Fire-Rescue hosted an open house at the station on Tuesday, May 18, in honor of National Emergency Medical Services week and in celebration of the station’s new Fire Engine #82, the station’s first new engine in 14 years. The engine replaces one that has been in use for 26 years, according to Fire Chief Colin Altman.

Many villagers attended, including kids seeking rides in the shiny red engines and adults seeking pulled pork sandwiches and cole slaw. Chief Altman thanked those who attended along with all Miami Township residents who voted for the fire department levy that funded the new engine, which cost more than $400,000. He also thanked the Miami Township Trustees and Assistant Chief Denny Powell, who he described as “the one who had the vision and wherewithal to pull this project through.”