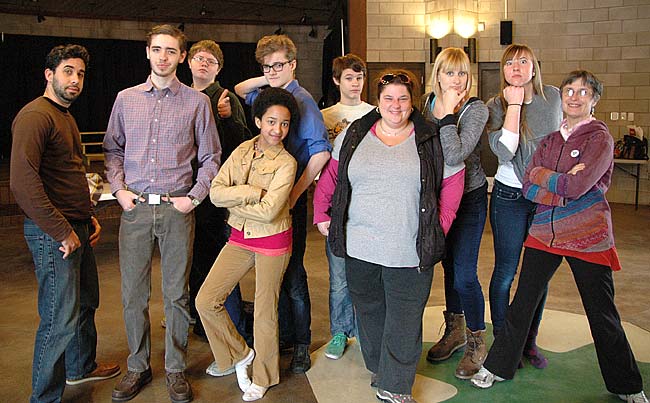 “GODZILLA!” with a comic twist

A 500-foot fire-breathing monster rises from the sea and tromps around with no regard for human life.  That’s the gist of pretty much every Godzilla film, as well as the plot of an upcoming local production, according to the play’s writer and director, Corrie Van Ausdal. Only this time, “GODZILLA!” is a clever comedy with pop music, striking shadow play, live sound effects and a cast of five talented local teens.

“GODZILLA!,” an original musical parody, opens at the Glen Helen Auditorium on Saturday, Feb. 8, at 7 p.m. and continues Sunday, Feb. 9 at 3 p.m. and on the following weekend, Friday, Feb. 14, at 7 p.m. and Saturday, Feb. 15, with performances at 7 and 10 p.m. The show is funded in part by a YS Community Foundation grant and produced by Yellow Springs Kids Playhouse as part of its 20th anniversary season.

In her first local production since returning to her hometown in 2012, Van Ausdal addresses themes in GODZILLA! such as religion, politics, power structure and love — “human constructs that mean nothing to the beast,” she said. At the same time Van Ausdal made her show global in scope, humorous, fast-paced (the show lasts just one hour), and filled with familiar tunes, including Tom Lehrer’s satirical “Who’s Next?” about nuclear proliferation, the Rolling Stones’ “Sympathy for the Devil,” plus an original ballad written by actor Blaze Wright which “everyone will be singing,” Van Ausdal said.

Because of scary themes, GODZILLA!, is deemed appropriate for audiences aged six and older.

Originally written for a cast of 75 teens at the 2013 Friends Music Camp, where Van Ausdal teaches, GODZILLA! was adapted for a cast of just five, including two local campers from that production, Blaze Wright, 17, and Jeremiah Scott, 16, as well as Sumayah Chappelle, 11, Bear Wright, 15, and Duard Headley, 14.

Van Ausdal, 36, grew up doing theater in Yellow Springs before living as an actor and playwright in Kansas City, Mo., where she made a name for herself performing at the Late Night Theater and the Fishtank Theater, which she opened with a friend. The daughter of retired local physician Dr. Paul Van Ausdal and the local musician, playwright and storyteller Carolion, who died in 2009, Van Ausdal grew up  immersed in theater. In college, Van Ausdal joined an improv troupe that traveled and performed regularly before moving to Kansas City to work as a serious actor while also running an undergarment store. Van Ausdal returned to the village with her husband, Matthew Collins, to raise their two young children here. She works as a bookkeeper in Dayton while continuing to work on plays on the side.

Read the full story in the Jan. 30 issue of the News.