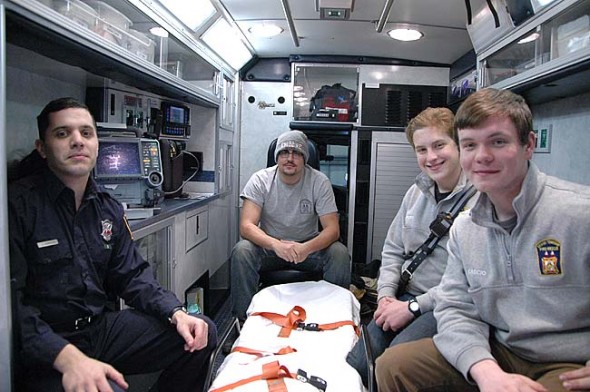 Miami Township Fire-Rescue volunteers, from left, Joe Panuto, Anthony Cascio, Nick Miller-Jacobson and Cayden DeFusco are among the first EMT students to take classes at the department as an accredited training center. (Photo by Lauren Heaton)

Volunteerism may have dwindled over the past 50 years, but no where is it felt more seriously as a matter of life and death than in small town fire and EMS departments across the country. Miami Township Fire-Rescue, once buoyed by a squad of about 50, now down to 30, is no exception.

What is unique are the efforts the local Fire-Rescue department is making to retain and attract the volunteers it needs to maintain health and safety in and around Yellow Springs. Last year, the department began offering a housing cost supplement from the Township budget to attract volunteers who live in the township and can respond to emergency calls from home. And this year, for the first time ever, the department began offering EMT courses at the fire house for anyone who’s interested. The department received accreditation last year through the Ohio Department of Public Safety Division of EMS. Fire-Rescue taught six in-house volunteers last year, and last month opened its first class of basic EMT training to anyone outside or inside the department interested in becoming an emergency medical responder. In the future, the local fire department also plans to become accredited to teach fire rescue courses as well.

According to Assistant Fire Chief Denny Powell, becoming accredited as a training agency helps the department to attract volunteers in the immediate area. Though it doesn’t make much money, the ability to train on site in exchange for service also allows the department to certify volunteers using their own equipment and procedural guidelines, which streamlines the process of bringing those volunteers into the ranks.

Miami Township has a hybrid volunteer and paid staff that Chief Colin Altman values over a solely professional department.

“To me, it’s a very important aspect to keep the community involved in what we do,” he said.

But there have to be people willing to sign up, and for years, Fire-Rescue’s numbers have been trending the wrong way. Fire and EMS calls have increased from to 900 in 2010 and more than 1,000 in 2013, while volunteers have dropped from around 50 in 2008 to the current ranks of just under 30.

The difficulty finding volunteers is only partly due to the lack of personal free time. The other challenge is the state’s increasing training requirements, which used to demand 120 hours for basic EMT certification but now require 160. The same is true of the fire course, which requires 168 hours of training for entry level work. 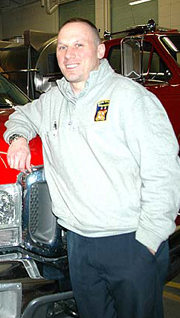 As a result of the trends, Miami Township has in the past five years added 10 part-time employees to its three full-time staff in order to cover all the shifts at the station. And because just seven members of the total squad live within the township, most of the volunteers have to sleep in cramped quarters at the station during overnight shifts.

Despite thinning ranks, the local fire department has managed to retain a viable squad, many of whose members are willing to drive from as far as New Lebanon and Piqua to be part of this operation. Part-time staff and volunteer Anthony Cascio has been a fire fighter for 11 years and has served in seven departments around the state. Miami Township Fire-Rescue tops the list, which is why he’s willing to make the 30-mile drive from home several times a week to attend the recertification training and put in volunteer hours.

“This is the best organized department I’ve worked for,” Cascio said.

Also unusual for such a small department is Miami Township’s commitment to training leadership at several levels. While most departments have chiefs, assistant chiefs and maybe captains and lieutenants, the local department recently added a sergeant rank to the leadership roles. Nathaniel Ayers, who joined the department in 2009, was promoted to sergeant last year. Though he didn’t volunteer as a career move, having a way to progress to higher levels of authority encouraged him to keep learning and growing into a part-time job that, at the age of 24, he is very pleased with, Ayers said this week.