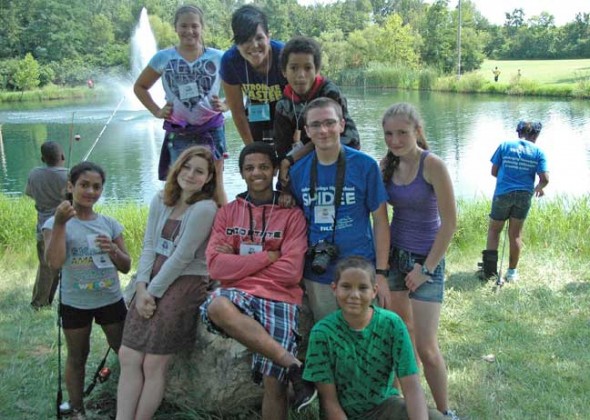 Last Wednesday, July 28, Yellow Springs youth Sam Foster cast his line in the pond behind the Huber Heights Fraternal Order of Police and reeled in a tiny bluegill. His first two days at the “Police and Youth Together” camps with about 30 other urban and suburban youth from the Miami Valley region learning about police and what they do had been insightful. They talked to police about handcuffs, tasers, guns and gun safety. They saw mounted police on horseback, met with a SWAT team, and talked to officers about their foremost mission to help the public and keep people safe. Four Yellow Springs youth attended the camp, and an equal number of older local youth served as counselors.

“We’re trying to improve relations between youth and police officers,” according to Lake Miller, a YSHS junior and counselor for the 10–12-year-old campers. “Primarily inner city Dayton kids who may have a negative relationship with officers — we’re trying to show them that police are regular people.”

If youth feel comfortable relating to officers and trust that they’re part of the same community, police become more approachable when there is a problem, according to both Yellow Springs Sergeant Naomi Penrod and Kevin Kovacs of the Miami Valley Crime Prevention Association.

Before the camp, Jaiyah, a youth from Trotwood, knew police mostly through television and thought they were generally mean, always telling people to “sit down and shut up,” she said, like they do on the show “Beyond Scared Straight.” But spending a few days with both male and female officers from the city and smaller towns has expanded her view.