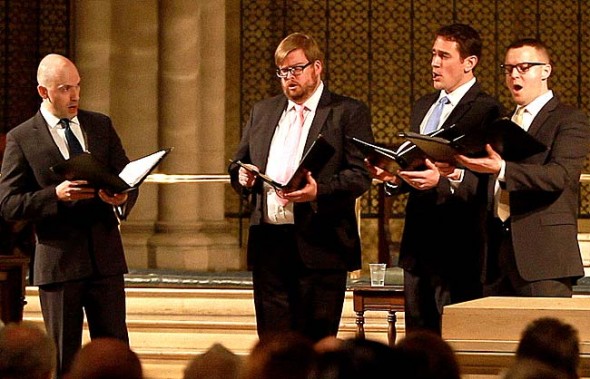 Vocal ensemble New York Polyphony will perform on Sunday, March 16, on the occasion of Chamber Music Yellow Springs’ 30th anniversary. The performance starts at 7:30 p.m. at the Presbyterian Church and includes a 65-minute contemporary and early music program designed to be sung without an intermission. (Submitted Photo by Joanne Bouknight)

The local First Presbyterian Church sanctuary is quite lovely, but ever thought of comparing it to, say, Carnegie Hall? The same small string, wind and vocal ensembles that play under the big lights in New York City, Paris and Tokyo, also play in this little Ohio town, the improbable seat of a world-class chamber music series known as Chamber Music Yellow Springs.

How did it come to pass that professional groups such as the Vienna Piano Trio, Calefax Reed Quintet, Red Priest and the Jasper String Quartet have become regular guests of the local series? Looking back, organizers see that as CMYS celebrates its 30th anniversary this year, at its root is Antioch College, at work and collaborating with the village community.

CMYS will celebrate its anniversary at the upcoming concert on Sunday, March 16, with a pre-concert reception reserved for members and subscribers. The performance by New York Polyphony at 7:30 p.m. at the Presbyterian Church will follow. The vocal ensemble will perform a 65-minute program designed without intermission with pieces ranging from early music to American folk songs to a commission by contemporary composer Ivan Moody.

According to CMYS President Jane Watts, the booking committee chose the group after “rave reviews” of their performance at the Chamber Music of America Convention last year. Though Polyphony is a relatively new ensemble, the committee was impressed with its recordings as well and the fact that all of its performers are also soloists in their own right.

New York Polyphony is not the first vocal group in what has become a string quartet-heavy concert series for CMYS. But its caliber is not unlike the perhaps hundreds of groups that have performed regularly in Yellow Springs since the Antioch College music program was going gangbusters in the 1950s.

Though few are around who remember that time, local resident Ruth Bent came to Yellow Springs in 1952 when Walter Anderson was running a robust one-man music department at the college. Anderson was persuasive and had wide ranging connections, and he “was very good at getting well known musicians to come here, snagging them on the way to Chicago or New York,” Bent said.

“Walter Anderson was an amazing man — he could do anything and get people to do it with him,” Bent said.

Without a performance hall to speak of, ensembles played on the stage in what was the college gym in the original Main Building. But when the college made a plan to turn the gym into Kelly Hall, suddenly the groups had nowhere to perform. That was unacceptable to a cadre of local residents who had grown accustomed to world-class music in their backyards. So they made a plan to fix their problem by starting the first Chamber Music Yellow Springs.

“The impetus to start our own series came from the fact that the college didn’t seem to be doing anything at that time, and there was no place at the college to have the concerts anyway,” Bent said. “A group of people said we can try this on our own!”

The group, including Antioch student Jim Bolle; Judy Spock, an Antioch graduate who would later create the CMYS cellist logo; her husband, Mike Spock; and Dotty Moore (Bent joined the following year), incorporated in 1957 and began holding concerts in the original Mills Lawn auditorium (new at the time). They continued for three years until the opening of Kelly Hall in 1961.

“We didn’t think we needed to compete with the college, and we were losing money anyway,” Bent recalled.

CMYS went dormant while the college began hiring more faculty and ramping up its music program. Local resident Richard Simons, now in his 80s, still recalls the details of his tenure with the department in the 1960s.

“To have that kind of strength … to me it was Camelot — the golden age,” Simons said.

For about five years in the late ’60s, the college also hosted its own Antioch College String Quartet, made up of graduates of Juilliard. So in addition to performances of avant-gard percussionists from New York City, dancers and musicians from India, and the college’s own choir and orchestra (always open to villagers and college graduates interested in playing or singing), the college had its own chamber musicians to regularly regale both the campus and the village.

“Antioch in the ’60s was a cultural Mecca,” Simons said.

But according to both Bent and Simons, the music department suffered a great decline during the 1970s, just as the college was turning its attention to its far flung satellite campuses and suffering grave budget problems, including a strike in 1973.

As music at the college was much of how music in the village happened, when the college began its decline, villagers stepped up in different capacities to keep different programs afloat, Bent and Simons said. Villager Pat Olds took over the early music program Antioch started, Bent took on the Community Chorus started by the college, and later a new group of villagers would eventually pick up where others had left off with CMYS as well.

College physics professor Bob Turoff was actually the first to organize a committed series of chamber concerts, mostly inviting musicians from the Cincinnati Symphony. Starting in 1979, the series ran for three years, until Turoff left town in 1982. At a post-concert dinner of the last scheduled concert, a group of villagers talked of resurrecting their own CMYS series. They found their old incorporation papers, and Jane Baker became the first president of the new CMYS.

Since then, according to CMYS records, the group has put on 163 concerts, including one at Kelly Hall, one at Antioch Theater, one at the United Methodist Church, and 160 at First Presbyterian Church. The concerts have included 62 string quartets, 32 piano trios, 11 each of woodwind and brass groups, and a variety of other ensembles with instruments including marimba and sackbut. They have performed a combined total of 835 works, heavily favoring Beethoven, and also featuring contemporary commissions by local composers such as Drew Hemenger and Allen McCullough.

Throughout its once and again history, CMYS has been integrally tied to the college — and even today, Simons is a board member while board member Kevin Mulhall is a librarian at the college. And though Antioch has at certain points in its history retracted from the community, the empowerment the college taught has helped villagers to carry on some of its projects, Bent said. That’s how CMYS started, and that’s how it continues today.

“I think Antioch had and still has a spirit that students learn when something needs to be done and someone says who’s going to do it — well, we will!” she said. “That’s part of the Antioch feeling.”

Tickets to New York Polyphony can be purchased at the door. To reserve tickets to the post-concert dinner, contact CMYS at 374-8800 and leave a name and the number of guests attending.