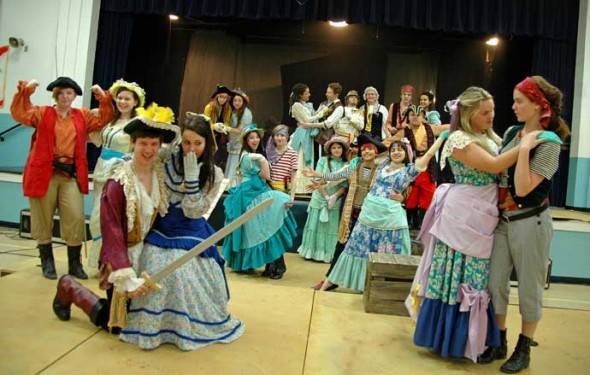 The Yellow Springs High School Drama Club and the YSHS Theatre Arts Association present Gilbert & Sullivan’s “Pirates of Penzance” at the Mills Lawn Auditorium on Fri. and Sat., Mar. 21 and 22 at 8 p.m. and one last time on Sun., Mar. 23 at 2 p.m.. (Photo by Megan Bachman)

“Pirates of Penzance” is one of my favorite shows to see. The plot is silly: Frederic, after being apprenticed to pirates because his nursemaid mistook them for pilots, has finally reached his day of freedom. Frederic announces that upon being free, he will go about wiping pirates off the face of the earth. This doesn’t seem to phase the pirates; they understand that Frederic will always be a ‘slave-to-duty,’ just as he was dutiful to them. That’s the first two numbers; from there, we’re off on a ride with twists and turns, joined by gorgeous daughters and cowardly policemen. Word-play and dry British humor abound, ending with a triple-twist ending, all based on issues of ‘duty.’ It turns out, in fact, that all the characters are slaves to duty, and that is their saving grace.

Gilbert and Sullivan are well known for their comedic operas that played with great success on both sides of the Atlantic in the late 1800s. To perform their work successfully, actors need an agile mouth and brain, the ability to sing in an operatic style, and a strong sense of ensemble. The Yellow Springs High School production directed by Cindy Lincoln has all three.

The cast clearly understands the humor behind their lines — whether it is the confusion over the words “orphan” and “often” in the first act, or the pirates stomping around the stage while singing about their “cat-like tread” in the second. They get the jokes and know how to communicate them to the audience.

The voices in the production are quite amazing. While the music isn’t necessarily difficult, the style is different than today’s pop or most Broadway tunes. Few students have experience with singing opera, so I was pleasantly surprised with how well the cast managed that challenge. As usual, Anna Knippling’s voice does not disappoint. As Edith, one of the sisters encountered by Frederic and the pirates, she shines. Alex Kellogg’s falsetto as Ruth, the nursemaid, is impressive and well sustained throughout the performance. Kara Edwards, as the Police Sergeant, is clear and crisp, though cowardly, as required. And Nekyla Hawkins, as Mabel, handles the vocal challenges of that role beautifully.

While there are wonderful solos in the show, what really sells the production are the times the performers “click” with each other. The sisters are a phenomenal ensemble. Even with powerful voices in the mix like Knippling’s and Evie Weir’s, their voices meld perfectly into a gorgeous ensemble (also including Allison Bothwell, Annabel Welsh, Greta Kremer, Kaila Russell, Modjeska Chavez, Shekina Williams, and Sierra Ward). Their blocking and acting provide the perfect mix of individuality and similarity to be both interesting to watch, but not distracting. That’s a hard balance for young actors to find, and I am truly impressed with the way they work as a team.

Likewise, “When a Felon’s Not Engaged,” sung by the police officers, is the most cleverly staged number in the show. Jack Lewis, Lucas Mulhall, David Walker and Edwards work together to highlight the comedy of the song, with impressive footwork and pratfalls.

“A Paradox,” sung by Ruth (Kellogg), Frederic (Ben Green) and the Pirate King (Joshua Seitz) is the tightest number in the show. The three play off of each other brilliantly, singing in harmony, moving in unison and, most importantly, enjoying being on stage with each other. It’s a theater mantra that if actors are having fun, the audience will have fun too; watching these three actors relax into each other and into their roles is a joy.

The cast is rounded off with Windom Mesure, as the Major General, who deftly manages the show’s signature song, “I Am the Very Model of a Modern Major General.” He also has the expected befuddlement of a man with nine marriageable daughters under his roof. The pirates, including Noah Winold as Samuel, and Charlotte Walkey, Simone Collins and Reese Elam provide a solid ensemble for the show.

The actors are supported by many of our local talented musicians in the pit, which joins the action, being on stage, surrounded by appropriate scenery. In fact, the staging of the show varies from recent productions, with the actors on the gym floor and seating on three sides. This provides new challenges for our incredibly talented student technicians. They rise to the challenge, of course, with well executed lighting cues and scene changes, and decently mixed live sound.

If you are up for a jaunty two hours gallivanting about with pirates, daughters and policemen, find a seat in the center section. This production is a first attempt at performing in three-sided thrust, and the performers haven’t quite mastered playing to multiple sides of an audience. But, this is a small disappointment in what is overall a solid, fun production of one of Gilbert and Sullivan’s finest.

*The writer, Ara Beal, is a native of Yellow Springs and currently an artistic associate with YSKP.