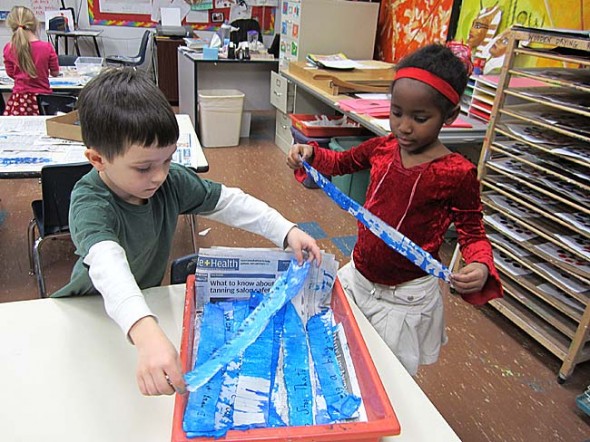 The Yellow Springs Community Foundation is celebrating 40 years this year with a monthly series of soundslide stories featuring its donors, grant recipients and beneficiaries. The audio pieces begin this week on the YSCF Facebook page, and continue through September, when the foundation will host a celebration party at the Antioch College Wellness Center. Above, Collin Calfee, left, and Gini Meekin participate in the Project Peace, funded in part by the Community Foundation. (Submitted Photo)

The three-heart logo that has stood for the Yellow Springs Community Foundation since 1974 represents its three pillars — the donors, the recipients and the beneficiaries (the people of Yellow Springs). Within a year of its incorporation in 1974 the foundation had $10,000 in unrestricted grants and one endowment for the maintenance of the Glen Helen Building (now the Vernet Ecological Center.) Since then, the foundation’s asset value has grown to over $10 million, precipitating last year’s biggest grant to date: $200,000 to support the renovation of the Antioch College Theater building.

That’s quite a bit of growth for all three pillars, the effect of which was expressed last week by Yellow Springs Arts Council president Jerome Borchers, who helped shepherd the long-time search for a performance center in the village — one that would be a nexus for more than just theater but actual community building as well.

As the Community Foundation celebrates its 40th anniversary this year, the organization is honoring its three pillars in a series of soundslides produced in collaboration with WYSO, sound editor Lauren Shows and photographer Dennie Eagleson. Each month the Foundation’s Facebook page will include a new program, featuring interviews with donors, recipients and beneficiaries of the foundation’s work. The series will culminate in a celebration event in September, when the foundation will talk about its focus for the future.

“It’s no big mystery,” according to Sterling Wiggins, president of the YSCF board of trustees. “Forty years ago a group of Yellow Springers decided to invest in the future of their community. Our hope is that these stories will spark great conversations in the coming year and inspire newer and younger community members to engage with the foundation and the many organizations with which we work.”

Foundation Administrator Virgil Hervey has seen the foundation’s growth through the change in his job over the past 11 years, which has become more of a project management position. The $4 million Miller Fellow grant the foundation received from Antioch College alumni three years ago involves continuous work matching student workers with community organizations — in order to match student needs with the needs of the nonprofits they’re serving. And the foundation has also taken on an educational role for local nonprofits, training organizations in how to increase their capacity and become better fiscal agents for smaller service groups who lack the official tax exempt status. Especially with the dissolution of the Yellow Springs Community Council and the temporary hiatus of the Morgan Family Foundation, the YSCF is seeing more frequent grant requests from its recipient organizations, Hervey said.

Where YSCF once was distributing about $120,000 a year in grants, this year the total is likely to be closer to $160,000, Hervey said. Indeed, in 2011 and 2012 the grants totalled $170,000, and last year, partly due to the theater grant, the annual gifts totalled $502,000. While the larger gifts benefitted the college, dozens of smaller gifts went to organizations such as Home, Inc., the Arts Council, the Green Environmental Coalition, the Yellow Springs Senior Center, the Family Violence Prevention Center and a host of public education programs funded through the YS Education Endowment and the YS Capital Endowment for the schools.

For the recipient organizations, the existence of the YSCF makes a significant impact on the ability to maintain a presence and serve unexpected needs that arise each year. The Children’s Center, which benefitted from a YSCF grant for a new building in 1981, has a Vernay endowment through YSCF that helps with building maintenance, which is a support for operations. And the foundation also pulls from unrestricted funds for one-time support for unexpected needs, Children’s Center Director Marlin Newell said. She finds it easier to apply for grants from people she knows and who know the kids and teachers at the center too.

The Glen also receives both one-time unrestricted gifts and operational funding from eight endowed funds with assets of nearly $1 million. The Glen has worked hard to grow its endowments, which provided about 6 percent of the budget in 2006 and now covers 15 percent, according to Ecology Institute Director Nick Boutis.

And the beneficiaries of such support includes the hundreds of students who come to school camps each year, the Eco-Campers, many of whom benefit directly from foundation scholarships, as well as the thousands of visitiors from the Miami Valley region the Glen receives all year long.

“The purpose, for example, if we ask for funds for a bridge over Yellow Springs Creek, is so 100,000 people a year can appreciate and learn from the experience of spending a day in nature (including a lot of local people who make a constitutional in the Glen a regular event),” Boutis said. “Even folks who aren’t able to walk in the Glen, if they live in Yellow Springs, they benefit from its presence which affects the local water supply, local ecosystems, flood control, and Yellow Springs as a cultural and intellectual community.”

Aside from supporting the projects and needs of local people, YSCF provides a local receptacle for charitable giving, something its founders Jim and Dorothy Mitchell, and initial trustees, Perry Stewart, George Asakawa, Hardy Trolander and Philip Aultman, envisioned. Part of the early idea was not to be dependent on the foundation for continuous operating funds and to use the foundation for projects that “might be thought of in other locations as wild notions,” Trolander once said. But its endowments and growth in giving over the years have made YSCF a central support for many local groups, including Yellow Springs Arts Council.

“We have a lot of part-time dedicated employees and volunteers, but the Arts Council can only do what we do as long as we have funding to do it,” Borchers said. “I hope the Community Foundation keeps doing what they’ve been doing. When I moved here in 2000 they were on my radar fairly quickly, and when they would report to the community, it’d be like, wow what a great idea!”