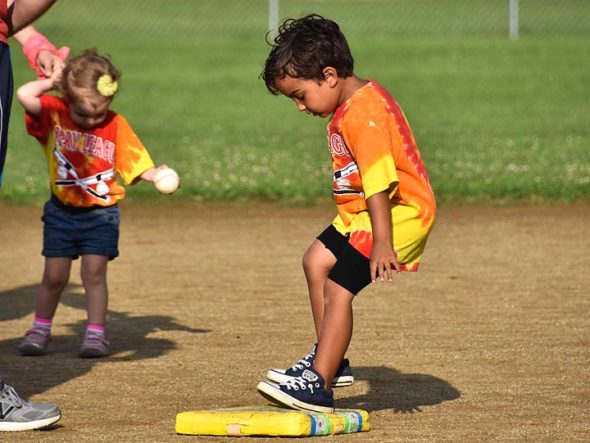 T-baller Luke Miller takes his base decisively at a T-ball game earlier this month. Last Friday’s play took place in 90 degree heat, which did not stop the intrepid athletes. (Photo by Luciana Lieff)

The forecast was for “extremely high temperatures” and there was an “excessive heat warning.” Amandine Bouquet Sabre’s mom Dorothée Buron wondered on Perry League’s Facebook page, “Will there be T-ball with the excessive heat advisory?”

Well, there was, but with a smaller than usual turn-out.

It was around 90 degrees at 6:30 p.m., and when I got to the field there was not a soul in sight — just me and an empty, oven-hot diamond. Then Thea (pronounced Tay-uh) Brevik and her parents showed up. Yunus, Thea’s dad, and I wondered, “Is this it?”

As we wondered, Kyle Ficke rolled up pushing his two wonderful daughters Violet, 4, and Amber, 3, in a double-stroller. We decided that we would play whether it was just the three children — Violet, Amber, and Thea — or 20 more. And play we did.

Topher Besson, 3, came eagerly to the plate, bat in hand. Spreading his legs, squatting down an inch or two, taking his stance, he wound up and slaughtered the ball, slashing it off the tee.

Allie Amend, 3-and-a-half, came next, her face shining and already growing red, as mine did, from the heat. She stood right next the tee, so close she was brushing against it with her hip. Not being able to swing so close in, she stepped back, and took two or three swings. Her mother, Sarah, took a few pictures and suddenly Allie popped the ball off the tee.

Allie’s brother Luc, 7, was playing second base and was the only kid in the field for a while. His dad, Hank, said he asked Luc to go out there so we’d have at least one fielder. Thank you, Hank. We were fortunate, too, because Luc was quite good, fielding every ball coming his way with his bare hands, often stopping them first with his feet.

Jack Ruedegeair, 3, was back with his dad, Shawn, and his grandfather Lance. Jack has those Ruedegeair genes, coming to the plate like a fullback smashing happily into the line, his drive and desire so strong. His skills with the bat and his swing and his stance matched his passion — all of it quite astounding and impressive. I know his dad and grandfather are talented athletes, but it is still quite fascinating and thrilling to see Jack’s natural drive and easy skill.

Clay Jasper Husk, 6, was alternately very serious and focused as a ball player and as a softly smiling, blithe spirit overflowing with confidence and charm. His little brother Ash, a 1-and-a-half-year-old, came to the plate with his dad, Brad, a patient papa who quite efficiently and effectively showed his young son how to hit that ball. Which Ash did, and did quite well.

Rebecca Reed, a gifted and versatile coaching partner with me for over two decades now, and Stefani Lewis, our resourceful and totally reliable coach managing the sale of Perry League T-shirts and getting people to sign up, brought a cooler full of ice pops. “We thought it might help kids stay cool,” Stefani said. Nearly every one of the 20-or-so brave kids who came out in this “excessive heat” (which turned out to be OK, not as punishing and insufferable as many of us feared it might have been) had an ice pop or two. As did I. Thank you, Rebecca. Thank you, Stefani.

Kyle Ficke comes to bat with his older daughter Violet, 4, and patiently, carefully and lovingly shows her how to hold the bat and swing it — which is a fairly complicated thing, or series of things, if you’re a 4-year-old. And Kyle does it so well, Violet gets a hit in but three swings — remember, this is Perry League where every child gets a thousand strikes, where many of our darlings need a thousand strikes.

In case you think Kyle’s patient, loving coaching is a fluke, when you see him offer the same sweet, patient and tender help to Violet’s little sister, Amber, you know it’s not — this is for real. Amber, too, a tiny 3-year-old, raps the ball stoutly off the tee in just a couple of swings.

Johnny Besson, 6, Topher’s big brother, is a force to be reckoned with. He is like an older version of the talented Jack Ruedegeair. Johnny knows the game. Johnny knows how to hold the bat. Johnny knows how to swing and how to swing strongly and accurately. He hits the ball very quickly and then, flinging his bat aside, he flies to first base, charging so fiercely, pumping his arms, throwing his whole self into his race to first, moving so fast I am surprised he can stop at the base without needing to run ten feet beyond, skidding and applying the brakes that whole ten feet.

Julia Camard, 5, tells me they got a tee at home, only their tee’s base is white. “And plastic,” she adds, wondering, “Oh, by the way,” for the 20th time, “can I blow your whistle?” “If your dad says it’s OK,” I say. And we check with Christophe and he gives his daughter the green light. When we let her blow it, her big sister Louise, 7, is right there, wanting a chance. As is the athletic, deer-like darling Rosaleah Gantz, 6, also wanting to blow my whistle. We all take turns — one blow becomes ten — and almost satisfied (“One more time! One more!”), we head home, all of us having survived this evening of T-ball in “excessive heat.”

And that’s our heated up Perry League, Yellow Springs’ T-ball program for all children 2–9 years of age, regardless of their race, color, creed, sexual orientation, ethnicity, spiritual inclination or practice, ability or disability — or their propensity to like it hot. Children can begin playing at any time and there is no requirement to play every week. So if you want to have some T-ball fun, come on out, join us. We’ll be out there at Gaunt Park from 6:30 to 8 p.m. for three more Friday nights, and we’d love to have you. We really would.