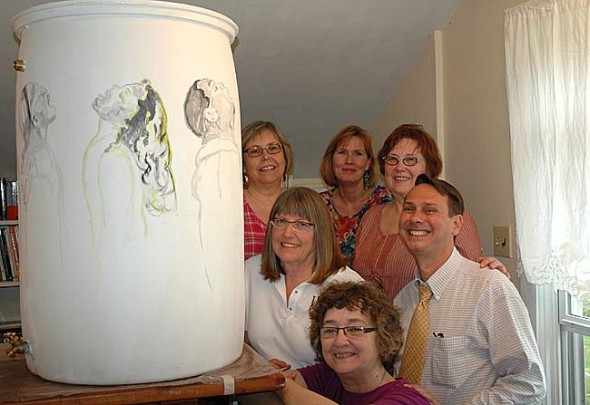 Support for those with mental illness

Medically related circumstances in a family’s life — from welcoming a new baby to undergoing chemotherapy treatments — often elicit helping hands from friends and neighbors. But when the circumstances involve mental health issues, the affected families can feel isolated and alone.

“They don’t bring you casseroles,” said Kathy Adams, of Yellow Springs.
Adams is among a group of villagers working to raise community awareness about mental illness and lessen its stigma, while also offering support for people with brain-based illnesses and their families.

May is Mental Health Month, and NAMI Yellow Springs, the newest affiliate of the National Alliance on Mental Illness, or NAMI, is recognizing the month by announcing the recent formation of two NAMI mental health support groups in town, one for adults living with mental illness and the other for family members, friends and caregivers of adults living with mental illness.

Both groups are peer-led, attendance is free and participation is confidential. The facilitators have had NAMI training, and Adams, who has a family member living with mental illness, has also taken the training.

She said families often face an absence of information when a loved one becomes sick with brain-based conditions such as major depression, bipolar disorder, schizophrenia and post-traumatic stress disorder.

“I didn’t know where to go,” she said about her own family’s experience. “We had no clue, and I’m a nurse.”

Sisters Donna Sorrell and Kathryn Hitchcock, who works at Yellow Springs News, are also part of the local effort. Sorrell said the groups formed out of community conversations that arose after the death last summer of Paul E. Schenck, who was shot by police in his home during a late-night standoff. Schenck, who had extended family and many friends in the village, was known to have mental health and substance abuse issues.

Sorrell said a Facebook post about the need for more mental health support helped get the local effort started. Tom Gray, of Tom’s Market, responded to a request for initial funding.

“We started as the Yellow Springs Mental Health Support Groups,” Sorrell said. The first meetings were in September, and “we went all through the winter,” she said. Hitchcock said she and the other organizers drew information for running peer-led groups off the Internet.

“We talked about NAMI,” Sorrell added, “but they didn’t have training until this spring.”

Sorrell said the groups are “confidential, safe places to share feelings and issues. If nothing else, participants get respect and understanding. Mostly we problem-solve. It’s called ‘group wisdom.’”

The village’s Human Relations Commission is integrally involved in helping maintain and sustain the groups’ efforts.

“I noticed a lot of conversations rising up from Paul’s shooting,” HRC chair Linda Rudawski said recently. The HRC has responded to the tragedy on several fronts. One is to work toward making certain that the village has the funding and staffing so that all Yellow Springs police officers can receive official Crisis Intervention Training; another is to help determine the gaps that exist locally in providing services and support for people with mental illness and their families. Toward the second effort, work is beginning to develop an online “searchable, current data base for social services in the Yellow Springs area.”

Rudawski, whose professional work is in social services, said that mental health discussions “typically have a NIMBY (not in my backyard)” component. But the opposite occurred in Yellow Springs after Schenck’s death.

“One of the things that rose up to me was that many people in the community were willing to feel love for a person who was obviously mentally ill,” she said.

The compassion and empathy shown is something the HRC, as well as the local NAMI groups, want to foster and deepen.

“We see the person first, not the illness,” Sorrell said.

Education is an important piece of the effort, and the local advocates plan soon to offer Mental Health First Aid courses to community members as well as front-line responders to teach ways to identify, understand and respond when people exhibit symptoms of mental illness, just as traditional first aid courses offer instruction for handling physical illness and injury.

Sharp was commissioned for the project in partnership with the Yellow Springs Arts Council, said Brian Housh, who as a member of the Village Council serves as a liaison with the HRC.

Sharp said she is pleased and honored to be part of the effort to raise awareness and lessen the stigma surrounding mental illness.

“I work with people with Alzheimer’s and other forms of dementia. These things present themselves in a similar manner,” she said.

Adams said she appreciated the comparison. “The goal is to get people to think of mental illness as a brain-based disease,” she said.

Raffle ticket sales for the rain barrel will be Thursday, May 22, during the public forum for the three Village manager finalists; Saturdays May 24 and 31 and June 7 at the Farmers Market; and Saturday, June 14, at the HRC’s Street Fair booth. Tickets are $5 for 1, $20 for five, and the barrel will be on display at each event.

For more information about the local NAMI support groups, contact organizers by email at namiconnection.yellowsprings@yahoo.com or namifamily.yellowsprings@yahoo.com or call 937-767-8622. NAMI Connection, for adults living with such mental illness as major depression, bipolar disorder, schizophrenia and PTSD, meets from 6:30 to 8 p.m. every Wednesday in Rooms A&B of the John Bryan Center 100 Dayton St. NAMI Family, for family members, friends and caregivers of adults living with mental illness, meets the second and fourth Wednesday of each month, from 6:30 to 8 p.m., at the Yellow Springs Senior Center, 227 Xenia Ave.