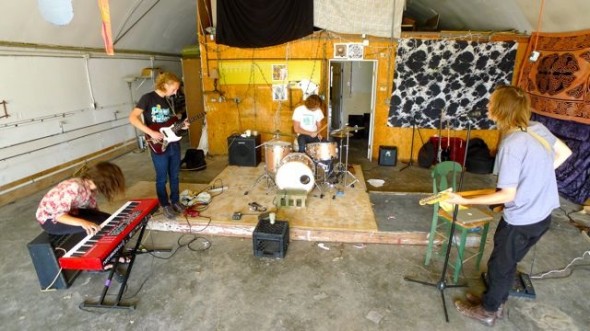 While there are many local bands out there keeping the venerable traditions of rock ‘n’ roll, blues and funk alive and well, there is one that is pioneering a new sound for a new era. That group is Speaking Suns.

A group of Yellow Springs kids (Conor Stratton, Sam Salazar, Jacob Diebold and David Bryne) who are now in their 20s, the confident foursome sounds like what’s next. Dropping expectations and conventions about how they should play their instruments and how they should sound, Speaking Suns is inspired and authentic.

The band’s first EP, Vanishing Country, drops Sept. 27. In support the album, the band will play a slew of local shows:
— Friday, August 22, at Gilly’s in Dayton, with the Motel Beds
— Friday, August 29 at Peach’s Grille with Injecting Strangers
— Saturday, August 30 at the Quonset Hut (Yellow Springs-Fairfield Road near the Miami Township storage facility) with Narrow/Arrow

Vanishing Country, released by Stratton’s Great Guy Records, explores the changing Ohio landscape of the members’ youth — the old farm equipment rusting in fields and dying small towns. “The whole wide country is vanishing,” says Diebold in the refrain of “Symmetry.” But far from melancholy, the album has more of a warm, nostalgic feel. As Stratton says of the album, “It’s a lot like our sound — dark but endearing.” 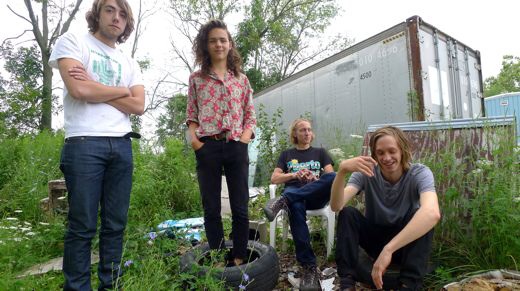 Trying to pin Speaking Suns into a genre is tricky. As Diebold says, “For being a pop band we’re unorthodox.” Salazar says the band exercises a freedom in its sound by not adhering to the “connotations about how a drum or a keyboard is supposed to sound.” For example, the song “Symmetry” starts off with an indie rock sound and devolves into a psychedelic jam session, replete with country riffs and trance-inducing keyboards.

“We survive on the fact that we can do anything we feel like,” Salazar said.

For a longer story on Stratton’s Great Guy Records and its bands, visit: https://ysnews.com/news/2014/03/yellow-springs-music-scene-gets-bigger