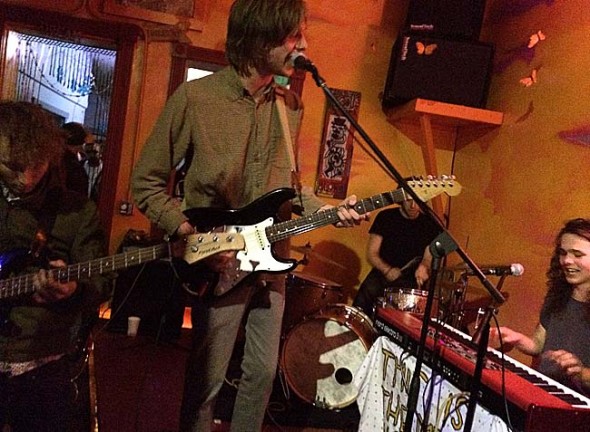 Local indie band Speaking Suns rocked the audience at the Spirited Goat Coffeehouse on Saturday night. The band will perform with labelmates Sport Fishing USA and Blond at a fundraiser for the independent label Great Guys Records. From left are Connor Stratton on bass, Jacob Diebold on guitar, David Byrne (back) on drums and Sam Salazar on keyboard. (Photo by Megan Bachman)

For a bumping live music scene, Sixth Street in Austin and the Williamsburg neighborhood in Brooklyn had a competitor in downtown Yellow Springs last Saturday night.

Speaking Suns’ bassist Conor Stratton, who helped organize the show as part of his new independent label Great Guys Records, wants to bring that pioneering new sound to part of Ohio dominated by bluegrass and your more typical rock and jam bands. And by helping Speaking Suns and other Ohio acts put out albums and tour in support, he hopes to propel them to stardom.

“I realized that we have all this talent out of Yellow Springs and we’re all friends, so we can have power in numbers,” said Stratton, a 2009 YSHS grad who now lives in Athens, Ohio, regarding launching the label last year. After two years in the music management and sound engineering program at Hocking College, Stratton found he had the skills — and studio access — to make it happen for a group of bands not short on talent or drive.

Two of the label mates trace their roots in the popular local teen indie-folk outfit Wheels, which dissolved last summer after three years, three albums and plenty of positive attention. Former Wheels members Stratton and Sam Salazar play in the four-piece Speaking Suns (Salazar sings and plays the keyboard) and Blond was formed around Wheels’ vocalist and percussionist Jaime Scott, who studied at Ohio University.

Wheels’ dissolution was inevitable in the eyes of Stratton, when some of its members went off to college and the group evolved in ways that were natural for a group of 13–15 year olds but which audiences didn’t immediately take to.

“Our second album was not well received and it took a long time for people to warm up to it,” Stratton said. “It was disheartening. It was as if we dug ourselves into a hole of this cheesy thing.”

By the time the band’s third album (self-titled) found it blending the heartfelt intensity of its second release, Big Feeling, with the more jaunty folk of its debut and began to garner some praise, the wheels had already started to come off. Today, the group of still-young musicians jokes about a reunion concert. At the same time, they are pushing themselves into new musical avenues with Speaking Suns and Blond.

Speaking Suns, for instance, taps zeitgeist bands like The Black Keys but adds on layers of harmony and complexity that make it harder to pin down as your everyday rock music. Lead singer Jacob Diebold sings the refrain of the crowd favorite “The Disenchanted” — “it don’t matter” — in a tenor reminiscent of Franz Ferdinand and delivers a song that could hold its own against a Strokes, White Stripes or Wilco hit.

“It’s chill but it’s still driving,” Stratton explained of the sound. “We have poppy, catchy tunes, nice chill sounds and then there is this rocking and energetic and dancy stuff.”

Scott’s Blond, meanwhile, has a more pared down and intimate sound, with guitar riffs of a surfer vibe and the overall feeling of a hazy summer memory. Taking in Scott’s wistful lyics and vocal earnestness is like listening to the Fleet Foxes.

“Jaime listens to old jazz and Sam Cooke — early rock and roll,” Stratton said. “You’ll catch him singing a song and you could have sworn he was a 1950s legend.”

Sport Fishing USA, meanwhile, captures a distinctly 1960s mood; it sounds like Neil Young without the brooding and features sharp vocals the likes of Neutral Milk Hotel, perky drums and a Korg keyboard. Byrne doubles as the drummer of Sport Fishing, with brothers Nathan and Brendan Moore rounding out the trio.

Sport Fishing’s sound takes notes from the Moores’ father, Chris, a local roofer and jazz cornetist who poured on 20s and 30s jazz tunes in their childhood, the 60s and 70s rock they played for themselves as teens and the 80s do-it-yourself rock they must have absorbed from the zeitgeist and Byrne’s father, an 80s punk rocker whose band toured with Black Flag. Brendan Moore, who plays bluegrass versions of Grateful Dead and Led Zeppelin songs with his other band, Blue Moon Soup, adds a touch of quintessential southern Ohio bluegrass sound.

Stratton is working hard to spread the Yellow Springs music, having sent out Speaking Suns demos to every college radio station within a 30-hour drive. Times have changed in the record industry. To avoid being drowned out by the sheer amount of music available online, bands have to cultivate their audience by touring now more than ever, Stratton explained.

Ahead of a Speaking Suns tour, the band is looking to raise $2,600 in an online Kickstarter campaign to buy 1,000 copies of its second album on CD, 500 vinyl pressings and 300 posters. Favoring an analogue format is Stratton and Byrne, who see vinyl as a more collectible and enduring piece of music and artwork. Byrne described the preference for records as a “mentality” and said, “It’s our way of expressing our appreciation of music as an art.” Sport Fishing is looking to put out more CDs of its new album, “Live at the Pool,” whose first run was only 50 copies.

Though Yellow Springs has its own niche music scene (which was in true form on Saturday night), Stratton also sees the need to expand outside of the heavy metal/jam band-heavy Dayton scene and the country/pop dominated Ohio scene. Stratton sees his job to push the original sound of Yellow Springs bands in an indie desert as a major impediment, but he also takes it as a challenge. Still, he is eyeing the West Coast as the next stop for himself and his band. Sport Fishing, meanwhile, has a gig this weekend in Brooklyn.

“A lot of times the market is not there and the kind of people you would appeal to aren’t there, unless you play country or pop,” Stratton said of Ohio, adding, “There is actually a saying in the record industry: ‘If you could make it in Ohio, you could make it anywhere.’”