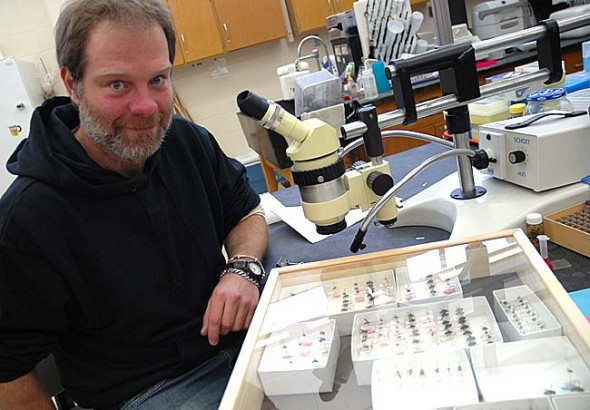 Entomologist John Stireman, who lives in the village and works at Wright State University, was honored in November by having a newly-identified wasp, the Ilatha Stiremani, named after him. (Photo by Megan Bachman)

Wasp named for ‘lord of the flies’

In the 1979 science fiction horror film Alien, a parasitic extraterrestrial lays its eggs in an unsuspecting astronaut, which hatch and burst out of his chest, killing him, in the film’s iconic scene. The lifecycle of parasitic insects is not much different, according to Wright State entomologist and Yellow Springs resident John Stireman.

In fact, Stireman can trace his academic career studying parasitic flies to a childhood fascination with monsters.

“Insects are monsters when you look at them close up,” Stireman said. “They’re so foreign. There’s no mercy.”

A newly-discovered parasitic wasp in Ecuador, which was named after Stireman in November, is similarly ruthless. It’s known as a hyper-parasitoid, since it parasitizes a fly that is already parasitizing a caterpillar. The fly eventually eats and kills the caterpillar, before being eaten and killed by the wasp. For a while they live like the Russian nesting dolls that fit one inside the other, Stireman explained.

The species of relatively large, often brightly colored wasps found exclusively in the New World tropics will be known forevermore as Ilatha stiremani. Even though Stireman is an expert on flies, not wasps (he has a sign on his office door identifying him as “Lord of the Flies”), he said he is honored to have lent his name to a wasp.

“I have lots of colleagues who have species named after them, especially taxonomists,” he said. “I think it’s cool, and it will potentially last forever.”

The wasp dons Stireman’s name because the entomologist helped to identify the poor fly involved in its lifecycle during research last year in the cloud forest of the Andes mountains. The authors of a paper identifying the new species thanked Stireman by naming the species after him.

Stireman joined the Wright State faculty and moved to the village with his wife and two children in 2007. Hailing from Utah by way of graduate school at University of Arizona, Wright State’s only entomologist spends much of his time in mountain high altitudes, rainforests lowlands and behind powerful microscopes studying the lives of flies. Capturing and cataloging the tiny insects can have big consequences, he said.

“It’s the first step to say what’s here,” Stireman explained. “Then we build on it and learn about the ecological interactions, the role they play, the behaviors and evolutionary relationships … You never know what kinds of useful things you might discover about a species. A lot of what we’ve learned about ourselves we’ve learned from other organisms, including insects.”

Stireman will soon publish a paper describing 11 new fly species from Mexico to South America, but he won’t be naming any of them after himself, which he says is a major faux paux in taxonomy. Stireman, who is discovering new species all the time, downplays the significance of the wasp naming. After all, there is an ant named after Harrison Ford and a horsefly named for Beyonce Knowles, he said.

But the work itself is essential, he said. With millions of insect species in the world, and conservative estimates that only one-fifth have been described, Stireman has a lot of basic science to do. His research can also be applied to conservation efforts. The place he works in Ecuador is a super hotspot — it’s one of the most biodiverse places in the world — and much of it might soon be destroyed. That makes his work all the more important and urgent.

“Part of the justification for doing this is we don’t know what’s there,” Stireman said. “Even insects with names, we don’t know how they live, what they eat. There are lots of threats to these places, and if we don’t find out, we’ll never know.”

There is so much to love about insects, according to Stireman, whose passion for the creatures dates back to a childhood of hiking with insect nets with his father. Owing to their diversity and quantity, a person could spend several lifetimes studying the insects that live in their backyard, which could number in the hundreds of species, he said. And they are unique as organisms, manifesting complex behaviors with such a limited brain, among other impressive traits.

“They are the most successful group of organisms on the planet if you look at diversity and age,” Stireman said. “There are more species of insects than anything. They do everything. They live pretty much everywhere, except for the open oceans. They have every lifestyle that could evolve.”

The professor chose to settle in Yellow Springs after his department chair, resident Don Cipollini, took him on a tour of the village when he first came to town. Stireman listed of the reasons why Yellow Springs fits him and his family:

While studying the world of parasitic insects can have practical applications, such as using such predator bugs as biological controls in agriculture to avoid the overuse of pesticides, it’s the basic science that most excites Stireman.

“There are applied aspects, but I’m just fascinated about learning about organisms,” he said. “I really like just finding out about the world.”