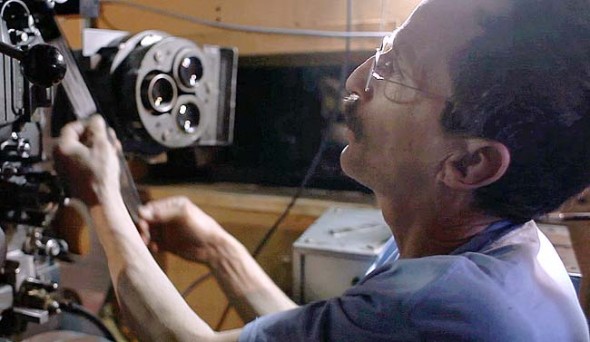 The documentary short ‘The Last Reel,’ by local filmmakers Steve Bognar and Julia Reichert, recently premiered at the Telluride Film Festival. The film chronicles the transition from 35 mm film to a digital process at The Little Art Theatre, and features longime projectionist Andy Holyoke, above. (submitted photo)

The thought of losing the more than 100-year tradition of celluloid motion picture film is the sad result of the economic advantage of digital film. But the experience of that subtle mechanical change is one that most audiences won’t ever perceive as they continue to go to the movies. So with their most recent short film, “The Last Reel,” local filmmakers Steve Bognar and Julia Reichert have made sure that the tactile motions and sounds of their old school filmmaking ways aren’t entirely drowned by the digital wave.

The eight-minute short, which documents the Little Art Theatre’s switch from real film to digital projection, premiered at the prestigious Telluride Film Festival in Colorado over Labor Day weekend. The discussion that followed the screening was longer than the film itself, Bognar said this week. “There’s a lot of passion in talking about film versus digital — especially if you’re in the film world,” he said. “They said they appreciated the time the film takes to show you how projectors used to work,” for example.

The film opens with the sound of long-time projectionist Andy Holyoke tromping up the stairs to the Little Art Theatre’s projection room with a hulking film case suspended from each arm. Soft lights illuminate analog images on the film strip, and the whirring of the wheels and gears of the projector form the film’s sound track. Holyoke has been projecting films since the 1970s, when he and long-time manager Jenny Cowperthwaite came to work at the Little Art. The film includes some of their comments about their love of real film, but mostly it captures their motions as they mount film wheels and splice strips during the theater’s “Last Reel Film Festival” in the spring 2013 — just before the theater’s historic renovation and switch to digital projection.

Bognar admits to the irony of having shot “The Last Reel” with a digital camera. But the decision was purely economic, he said, which makes a big difference when considering the cost of film itself and the enormous time and cost of editing with a splicer. But of course Bognar loves the traditional 35-millimeter film he began projecting at Beaver Valley Cinema as a high school student and has worked with ever since. Actual film has an “organic” quality whose scratches and imperfections can be seen and heard, he said, and translate into something that feels alive.

“Motion picture film wobbles in the gate — it moves and snaps as the film rolls over the gears through the sprocket holes,” he said. “The rattle of a projector is music to my ears.”

At some point during the time the Little Art and almost every theater in the country was preparing to make “the switch,” Bognar and Reichert realized they had only a little time left to document this passing of an era in film history.

“It hit us like a ton of bricks,” Bognar said. “We realized this way of showing movies was about to disappear and that future generations will never see it.”

Bognar is honored that “The Last Reel” was invited to premiere at Telluride, and he and Reichert plan to keep screening it at other festivals and art houses in Boston and New York, as well as a screening at the Wexner Center for the Arts in Columbus. The film will also screen privately at the Little Art at the end of the month at a thank-you party for the Friends of the Little Art who supported the renovation.

The Little Art wasn’t the very last to give up its 35-millimeter equipment. Some theaters and film societies, such as the Wexner Center, kept their film projectors to show historic copies of old films. But the local theater’s transition is complete — the original projector was donated to the Cincinnati Film Society, and the theater has no way to project actual film anymore.

So viewers will have to see it, hear it and remember it in “The Last Reel,” which will screen publicly at the Little Art at a date to be determined.

Bognar teaches advanced film production at Wright State University, in the Department of Theatre, Dance & Motion Pictures. His previous films, all co-produced with Reichert, include the Academy Award nominated “The Last Truck: Closing of a GM Plant,” the short film “Sparkle,” about DCDC dancer Sheri ‘Sparkle’ Williams, and the Primetime Emmy award winning “A Lion in the House,” about families facing childhood cancer.