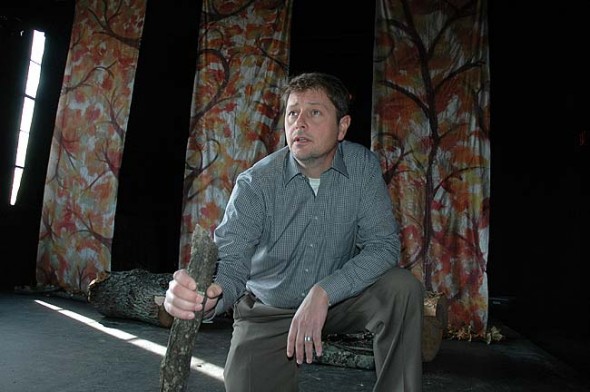 Thor Sage co-stars in a play he wrote as a senior thesis at Antioch University Midwest. (Photo by Megan Bachman)

It’s set in the woods, in modern day. There are two characters. And it’s a comedy. Well, a dark one.

That’s all that can be divulged about the new Yellow Springs Theater Company play “Killers.”
As Thor Sage, the playwright who also co-stars in the show, says: “To give away the plot would ruin it.”

Sage’s play — also starring Ed Knapp, directed by Ali Thomas and produced by Lorrie Sparrow — explores the themes of violence and human nature and was inspired by existential philosophy and transcendentalism, he added.

“It’s about how people manage their fundamental nature in the context of society,” Sage said.
“Killers” runs Nov. 7–8 and Nov. 14–15 on the experimental theater stage at the Antioch Foundry Theater. There are shows are at 8 p.m. on Friday and Saturday nights and additional shows at 11:45 p.m. on both Saturdays, Nov. 8 and Nov. 15. Tickets are $10 each.

“Killers” contains adult subject matter and profanity and is not suitable for young children. Since space is limited at 45 seats, the company suggests calling the theater company reservation line at 937-708-1255 to reserve spaces, while payment will be collected at the door.

In addition, a special “Meet Yellow Springs Theater Company” wine and hors d’oeuvres reception will be at 6:30 p.m. before the show on Saturday, Nov. 15. Members of the company will attend and present a short introduction to the company and its upcoming season. Tickets to that event, which includes admission to the 8 p.m. show, are $20. 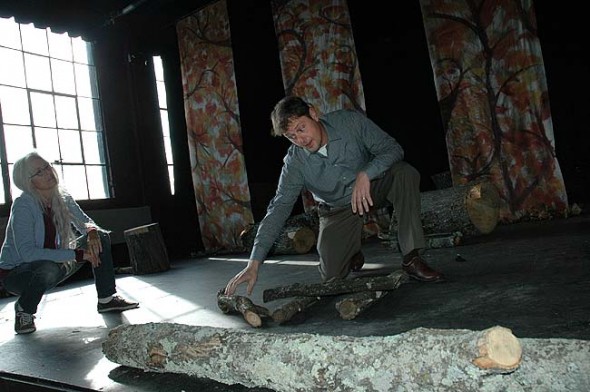 “Killers” is the second show to be performed by the Yellow Springs Theater Company; previously the company put on “D’Arc Comedy” this summer at the Antioch Amphitheater. The group of about 20 local actors is working through its first season as a cooperative theater company.

Read the full story in the Nov. 6 issue of the News.