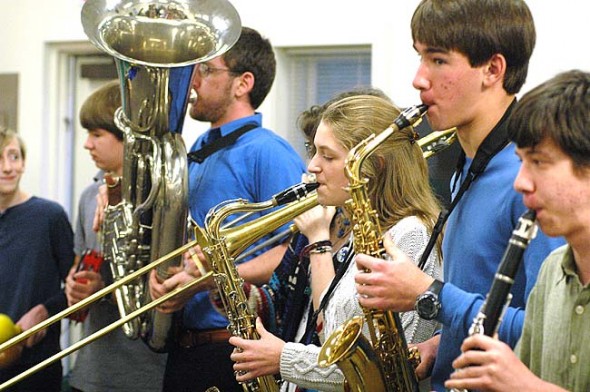 The annual Friends Music Camp concert fundraiser, featuring former camper Martin Bakari, takes place this year on Monday, Dec. 29, at 7:30 p.m. in Westminster Hall at the First Presbyterian Church. An eclectic evening of music by campers, former campers and staff members will be provided. Shown above is the local band SassaBrass, which performed at last year’s event. (News archive photo by Matt Minde)

Last year’s winter benefit concert for Friends Music Camp drew such a large audience, the Senior Center’s Great Room was bursting at the seams with people sitting on the floor in the front and standing several deep against the back and side walls. Organizers worried about the crowd’s comfort — and safety. So this year’s event, which raises money for the month-long summer camp’s scholarship fund, will move to the First Presbyterian Church’s Westminster Hall.

The program will be an eclectic one, said Peg Champney, who co-founded the camp in 1981. In many ways, the annual concert reflects the spirit of the camp, which is noncompetitive and open to exploring a wide range of musical expression. The evening’s selections will range from classical to modern to folk “to original pieces by the staff,” Champney said.

One of the best known locally is tenor vocalist Martin Bakari, who grew up in Yellow Springs and attended Friends Music Camp before earning a BFA from Boston University and an MFA from Juilliard. Now a professional singer based in New York City, the 27-year-old has returned to the camp the past two summers as an instructor.

“Friends Music Camp is unique,” says Bakari, who joined in last year’s benefit concert as well. It’s so special to the young professional, that he gladly adds his voice in its support during a very busy time in his work schedule.

Other participants with local ties include Martha Hyde, who grew up here and is now a professional woodwind musician and composer living in Brooklyn, N.Y.; and  professional violist Wendy Enderle-Champney, a Yellow Springs native who plays with her husband, Matthias Enderle, in the Zurich, Switzerland-based Carmina Quartet. Hyde is a long-time instructor at the camp, while Enderle-Champney has also taught there.

Also participating will be Yellow Springs students Connor Gravely-Novello and Blaze Wright and a former camper who went to work for the camp this past summer — Rourke Papania, who as a high school student co-founded the alt-bluegrass band Wheels.

Papania, now in his junior year at Ohio University, said he was thrilled to return last summer to the camp’s campus in Barnesville, Ohio, as a dorm counselor.

“We would all play music together,” he said of staff and students. “There is no stratification. There would be Ph.D’s (playing) alongside amateur players, and you really respect each other.”

More current campers are involved this year than at past benefits, Champney said.
“More than ever this year, the campers felt it was their thing.”

Friends Music Camp, which is open to youth ages 10 to 18, fosters not only musical growth, but also personal enrichment and community building. It is inspired by Quaker values, but does not teach Quakerism as part of the curriculum. The return of former campers as staff, and the strong attachment of current campers attests to the sense of community they feel in relationship with FMC.

In fact, a number of former campers are planning a reunion in Yellow Springs at the end of the month to coincide with the benefit concert. The now young adults are coming in from all over the country, and staying with friends in town, Champney said.

“It’s really great we can all come together,” Papania affirmed. “It’s really an amazing community.”

The influx of FMC-related folks to town also means that more people than last year may well be attending this year’s concert, another reason to move to a larger venue.

“If we go over (the limit), we have to turn people away, and we thought that was unfriendly,” Champney said.