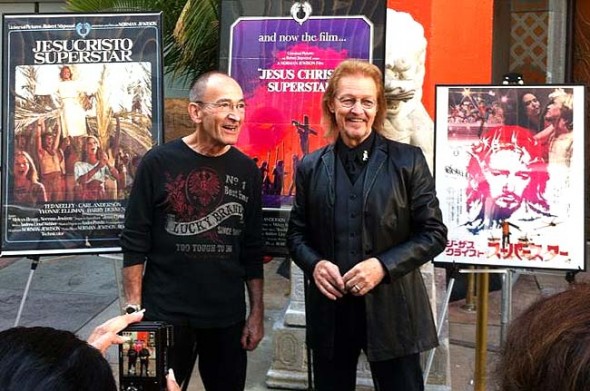 Stars of “Jesus Christ Superstar,” Barry Dennen and Ted Neeley, will visit Yellow Springs for screenings of the film March 27–29 at the Little Art Theatre where they will answer questions and sign autographs. Dennen, left, played Pontius Pilate in the 1973 film; Neeley was in the role of Jesus. (Submitted photo)

Snap a selfie with Jesus and Pilate

Just in time for Easter, locals will have the chance to snap a selfie with Jesus and Pontius Pilate.

The stars who portrayed the Biblical figures in the 1973 film “Jesus Christ Superstar” will attend a weekend of screenings at the Little Art Theatre, March 27–29.

After the movie, Ted Neeley, who played Jesus of Nazareth in the groundbreaking rock opera, and Barry Dennen, who was Pontius Pilate, will sign autographs and answer questions about their lives and careers.

Neeley, who still tours in the stage version of the musical, has played the role of Jesus more than 5,000 times and has been changed by the experience, he said in a telephone interview this week.

“When you play the most important character in the history of the world and people perceive you that way, it affects you,” said Neeley, who is 71. “Even to pretend to walk in those sandals every day of the week, I am lifted and elevated.”

Tickets are available for screenings of a newly-remastered digital version of the film  7 p.m. Friday, March 27, and 2 p.m. Sunday, March 29 (Saturday evening is sold out). The screenings include an hour-long, pre-film Q&A session, as well as a post-film general meet-and-greet and autograph signing. To purchase tickets ahead of time, which is recommended, visit http://www.littleart.com. In addition, VIP passes are on sale for Friday and Sunday which include a pre-film VIP-only meet and greet with Neeley and Dennen, along with memorabilia. For a little more money, an attendee can even be guaranteed a seat next to the stars.

According to event organizer and former village resident Vanessa Query, no matter what package attendees choose, “hugs are included.” Query, a “Jesus Christ Superstar” superfan, is organizing screenings around the country from her home of Providence, R.I. because she knows the film still resonates with people everywhere more than 40 years after it was released.

“It’s so awesome that people still connect with this,” Query said. “For me it’s the quality of the music … I’m not Christian but I love that it gets Jesus to people who wouldn’t normally care about him.”

Originally a concept album and Broadway show, “Jesus Christ Superstar” was an early example of rock opera, with music by Andrew Lloyd Weber and lyrics by Tim Rice. The film, shot on location in Israel, features stunning cinematography of the  Holy Land desert juxtaposed with ’70s fashion and flair. In one number Jesus’ disciples sing “What’s the Buzz?” while Judas dons bellbottoms.

The film is based upon Biblical accounts of Jesus during the last seven days of his life and originally sparked controversy because of its modern touches and because it showed Jesus as a man, not as the Christ, Neeley explained.

“It’s a concept about Jesus as a man, which is not challenging the deity,” Neeley said. “It’s looking at him through the eyes of contemporaries who saw him as a man prior to crucifixion and resurrection. And everyone can see elements of themselves [in Jesus] — his fears and desires, his questions and doubts.”

Neeley remembers pushing through crowds of protesters each night when he took the stage as Jesus in the Broadway version, which preceded the film in the early 1970s. Controversy over the project continued until the film’s director Norman Jewison sought, and received, the blessing of Pope Paul VI prior to the film’s theatrical release, Neeley said.

“The Pope said, ‘Not only do I love your film, but because it is set to music, I think it will bring the next generation to Christianity,’” Neeley recalled.

During a year-long run of the musical in Europe, Neeley met the current pope, Francis. He recently returned to his California home in preparation for a U.S. screenings tour of the film.

Reflecting on his life, Neeley said he is blessed and grateful for the opportunity to play Jesus, which has affected him spiritually and personally. Neeley met his wife during the filming of “Jesus Christ Superstar” — she was a dancer in the movie. And, he says, each time he plays Jesus he does more research to prepare for the role, while it deepens his faith as a Christian. The experience is humbling, he said.

“I know that I’m not Jesus — I am just a rock-and-roll drummer from Texas who can hit high notes,” Neeley said, referring to days in a rock band in the 1960s. In 1969, Neeley was cast in the musical “Hair” which led to his role in “Jesus Christ Superstar,” he said. Neeley is still a musician, and released the album “Rock Opera” last year, which features selected tracks “Tommy” and “Jesus Christ Superstar” among other songs.

Before organizing film screenings, Query had a role in re-connecting cast members of “Jesus Christ Superstar” with her 2009 blog post questioning the whereabouts of Bob Bingham, who played Caiaphas in the film. After false leads that Bingham was a blues singer and old nemesis of Gore Vidal, Query tracked down the real Bingham in upstate New York, where he was retired from the zipper industry. That led to a mini-cast reunion with Bingham and others last year.

From singing along with Mary Magdalene in her bedroom as a young girl, to arranging screenings across the country for the stars, Query is definitely a a “Jesus Christ Superstar fangirl,” she said. And she is thrilled to be able to help other fans meet the stars of a film that they love.

“A huge part of a cult film is the fans,” she said.

Click here for an in-depth audio interview with Neeley.