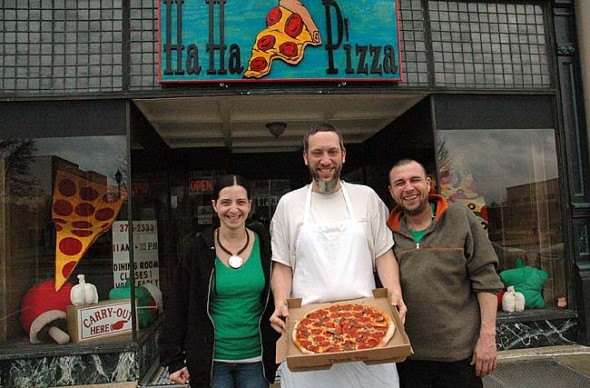 Ha Ha Pizza owner B.J. Walters, center, opened a second location last month on Main Street in Xenia across from the courthouse. The restaurant features the same menu of handmade pizzas, calzones and subs as the original business in Yellow Springs. The move involved a major renovation project facilitated by long-time employees Misty and John Howell. (Photo by Lauren Heaton)

For nearly 40 years, when someone said Ha Ha Pizza, everyone knew that meant the homey New York style pie joint in downtown Yellow Springs. But last month the business began saying something new: “Ha Ha Xenia, may I help you?”

To be sure, the original Ha Ha Pizza is still alive and well. It’s been doing so well that owner B.J. Walters opened a second location at 29 E. Main St. in downtown Xenia last month. Both restaurants have the same name (though servers quickly realized that clarifying the location was critical for carry-out orders) and the same menu of handmade pizzas, calzones and subs with ingredients ranging from pepperoni and banana peppers to pesto and tempeh.

Since the Xenia site opened on March 10, it’s become clear that diners south of the Little Miami prefer more meat, specifically three times more Italian sausage than veggie-loving Yellow Springers. But Walters is prepared to meet the different demands in order to offer pizza with dough made fresh daily to a slightly wider crowd than the business did before. It’s Ha Ha Pizza freshness that gives it an edge in the pizza industry.

“I think there’s room for my pizza — it’s an experience people have coming here and having a wholesome pizza rather than a mass produced product,” Walters said. “Ours is fresh and handmade.”

Ha Ha makes its own dough each day in the Yellow Springs kitchen using a simple recipe of flour, water, olive oil, evaporated cane juice, yeast, salt, herbs and cornmeal. The sauce is similarly spartan with a base of canned tomatoes and citric acid, herbs, green peppers and evaporated cane juice. The recipe has been the same since at least 1998, when Walters came to work at the original Ha Ha Pizza, eventually buying the business in 2005. It’s been his intention since then to eventually open other Ha Ha Pizzas.

“The whole plan was to franchise Ha Ha — my goal was to set up three to five stores with a central processing and distribution place,” he said. But Walters is patient and has waited nearly 10 years to step out into new pizza territory. He chose Xenia because it was close enough to Yellow Springs that residents there would recognize the name and not so far to challenge distribution. Plus, Xenia is less of a seasonal tourist destination, which Walters hopes will make sales there steadier throughout the year.

The store sits across the street from the courthouse and other government offices, and is next door to Xenia Shoe and Leather, a long-time business owned by Yellow Springs resident Tim Sontag. Xenia is also supporting a revitalization project in its town center, where a developer is building a family entertainment center and eight-screen movie theater where the Kmart and Fulmer grocery were located.

“There’s a lot of drive from a lot of people who are trying to revitalize the downtown and bring back small businesses,” Walters said. “I’ll benefit, as well as help the effort by giving people a reason to come here.”

Maneuvering to get the space to conform to the Greene County building code set the opening back about six months later than Walters envisioned. But Walters got support from his dozen employees, which recently grew to 15–20. And the project itself never could have happened without the help of longtime employees John and Misty Howell, whom Walters calls his “right and left hands.”

“They worked just as hard as I did, and they were motivating me,” he said. “They helped build this place.”

Walters, 37, grew up just west of Dayton and has always known he wanted to own a business, he said last week. He is good with numbers and has found that being personable and empathetic helps him to lead others. When he came to Ha Ha, he quickly sized it up as a business with a solid product that would last.

“I knew the food was good, the food was right,” he said, which was enough to motivate him to pay off his business loan in four years and start putting capital back for a second store, which he believes will be as successful as the first. He’s sticking to the model to find out.

“Why fix something that’s not broke? It worked for the first 40 years, and I hope it works for another 40,” he said.

The Xenia Ha Ha Pizza is currently open 11 a.m. to 10 p.m. daily, and plans to hold a grand opening soon.